Michael Levine is, without a doubt, the prime example of a “Go-Getter”. His reputation and record are a shining reflection of this. If you’re looking for an attorney who is the rare combination of experienced, hard-charging, tactical, spirited, and unfailingly caring, you’ve found him.

At RGLZ we sometimes wonder how Michael finds the time and energy to do everything he does. He lectures often on his areas of expertise before the bar associations of Suffolk and New York State, writes articles for legal journals, served as Past President of the more than 4000 member strong New York State Trial Lawyers’ Association, is Mayor of his home town of Old Field, NY, and still finds time to be an active part of the Long Island motorcycle community as Motorcycle Mike Esq.

This is all on top of a thriving practice here at RGLZ, where Michael handles litigation in numerous types of personal injury cases including motor vehicle accidents, premises liability accidents, construction accidents, and railroad and subway accidents, among others. He is also a friend of labor unions, taking cases for the Transport Workers Union and other large unions in New York.

Despite this nearly insane workload, Michael Levine is also well reknowned as a true friend to his clients. He prides himself on providing round-the-clock access for his clients, regularly taking their calls personally at all hours of the day. This is backed up by the fact that, in his entire career, Michael Levine has never had a grievance filed against him, and many of his clients remain friends to this day. There simply aren’t many attorneys out there who can make a claim like that. Despite Michael’s dedication to improving both himself and his profession as a whole, his clients always come first, and his priorities are always simple.

"In my time as a personal injury attorney, I’ve seen almost all there is to see. A large part of my life is coming into other people’s lives in what is likely their worst moments; and it’s tough. It hurts to see people in these situations. But at the same time it’s what drives me. I know that I can make a difference for these people. And if, at the end of my time with them, I can see them smile, and feel just that little bit better… That’s what I do all of this for.”

Michael Levine is someone you can count on to get the job done, no matter what. He is a man of endless drive, ambition, and compassion. A man who will never stop trying to improve himself, his profession, and the lives of the people around him. And someone who simply doesn’t understand the concept of doing things “half-way”.

Michael S. Levine has been practicing law for over 3 decades, following his 1985 admission to a number of state and federal bars, including the bars of New York and New Jersey; the U.S. District Court for the District of New Jersey; and the U.S. District Court for the Southern and Eastern Districts of New York. He graduated from Hobart College in 1979, where he was a Dean's List student and captain of the tennis team. Michael earned his J.D. from the Walter F. George School of Law at Mercer University in 1983. He belongs to both the New York State Bar Association and the Suffolk County Bar Association; where he is a member of the Board of Directors; the American Association of Justice; and served as Past President of the New York State Trial Lawyers Association (NYSTLA).

Based upon a peer review, Michael has been recognized as one of New York's Preeminent Lawyers in the Martindale-Hubbell Bar Register every year since 2005. He has also, since 2010, been recognized as one of the top attorneys in the New York metro area, and as a Super Lawyer by New York Magazine. In 2013 Michael was honored as the “Man of the Year” of United Cerebral Palsy of Suffolk County, and inducted into his high school’s Athletic Hall of Fame. 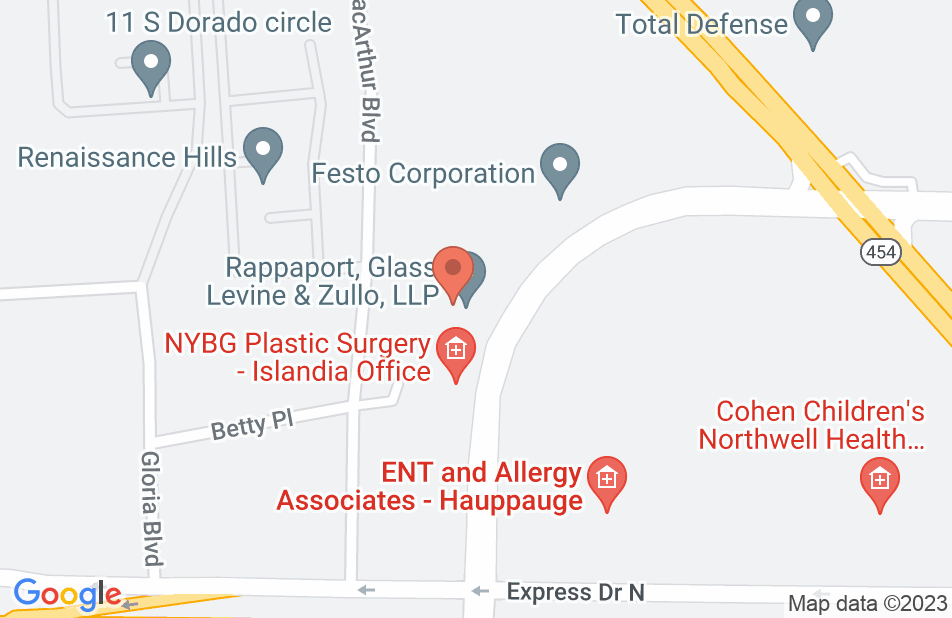 Mike did an outstanding job, He explained the process to me in simple terms, He was always there when I had questions and was easy to talk to. Very professional, Thanks for everything Mike
This review is from a person who hired this attorney.
Hired attorney

Mr. Michael Levine and staff of RGLZ are truly wonderful. Great Law Firm to have represent you. The Firm has very compassionate and understanding people representing it. I was very well informed with things happening in my case. I am truly satisfied and if ever in such a position again they will be at the top of my list. Thank you Micheal.
This review is from a person who hired this attorney.
Hired attorney

Michael Levine is a terrific lawyer! When I broke my ankle he researched every detail of my fall on black ice and was even able to obtain the surveillance footage of my actual fall. He put me at ease from the beginning and did everything possible to get me a successful outcome. He is caring and compassionate and tough when he needs to be. I was very pleased with the outcome ! He always told it like it was and never beat around the bush. But he was relentless in his efforts to get me the best possible outcome ! I will always be indebted to him. He is an excellent attorney!
This review is from a person who hired this attorney.
Hired attorney

Great advocate for his clients

Simple put, Mike is awesome. He always kept me informed, and cared about what was going on with me. When it was time to go to court, he was totally prepared. He took the time to fully understand what had happened, and prepared a video PowerPoint that was very easy for anyone to understand. I will be recommending him to anyone that needs a personal injury lawyer. He is an excellent advocate for his clients. I really can’t say enough about his skill and professionalism. Thank you again Mike.
This review is from a person who hired this attorney.
Hired attorney

Michael Levine and his associate Yvonne we’re professional in every sense of the word. They were always reachable and they were prompt in their response to any questions I had. I recommend Mr. Levine without reservation. They did an excellent job representing my best interests.
This review is from a person who hired this attorney.
Hired attorney

Best and most professional

Michael Levine delivers what he promises and in a most professional manner. He also truly cares about his clients like no other. If you need a personal injury attorney, Michael Levine is the one to use!! I am forever grateful.
This review is from a person who hired this attorney.
Hired attorney

After my wife was the victim of a traumatic automobile accident, I didn't know who to turn to. Am I glad that I found the most effective and sympathetic legal expert, Michael Levine, to fight tirelessly for us and to patiently guide us through the process. I would think anyone in an accident would be doing themself a gross injustice if they didn't call him--I couldn't recommend him highly enough.
This review is from a person who hired this attorney.
Hired attorney

My wife and I were referred to mike after I had fallen at work and received a few extreme injuries to my lower body which we knew was going to be life changing for us. We wanted to find the best attorney possible that would take us through this process which can be very frustrating at times. Mike was very patient with us and explained to the "T" what to expect and was always encouraging. My wife and I would highly recommend Mike to represent anyone who isn't sure or doesn't have someone who can recommend them to an honest attorney.
This review is from a person who hired this attorney.
Hired attorney

Mike Levine "Motorcycle Mike" was very professional and effective. His assistant Yvonne was very helpful and knowledgeable. I was very happy with the outcome.
This review is from a person who hired this attorney.
Hired attorney

Mike Levine was very compassionate, kind and patient with my daughter. He made the case effortless for us. Anytime we had a question we received a quick response from Mr. Levine himself and he was genuinely concerned about the progress of my daughter's recovery. I would recommend Mr. Levine in a heartbeat.
This review is from a person who hired this attorney.
Hired attorney
See all reviews

Mr. Levine is a highly capable attorney committed to providing clients experienced, knowledgeable and aggressive representation. I endorse him without reservation.

Michael Levine is someone you can count on to get the job done, no matter what. He is a man of endless drive, ambition, and compassion. A man who will never stop trying to improve himself, his profession, and the lives of the people around him.

Michael is respected by both his clients and colleagues, including myself. He is, without a doubt, the prime example of a “Go-Getter”. In his nearly 30 years of practice, Michael has never stopped chasing after perfection, and his reputation and record are a shining reflection of this.

Michael Levine is someone you can count on to get the job done. He will take your call at all hours of the day to make sure of it. His clients always come first no matter what and many of them remain friends with Mr. Levine.

It is without reservation that I endorse this lawyer. MIke Levine is a lawyer's lawyer. In my 15 years of practicing, I can count on one hand the lawyers that possess Mr. Levine's skill set. Knowledgeable, thorough, passionate, sincere and aggressive, he has the whole package. To speak with Mike is to know instantly that you are in the presence of someone that believes in his clients' plight and will fight hard to obtain justice for them. In a profession over populated with mere practitioners, Mr. Levine stands out as an advocate and champion of those fortunate to be represented by him & his firm. Simply put, the guy is the real deal!!!