Attorney Jacobson is a graduate of the University of Connecticut School of Law. In March 2018, she started her own law practice, which is the Law Office of Eva Jacobson PLLC. She currently handles immigration, custody, divorce, child support, criminal, and Social Security disability matters. She is currently taking cases in Hartford, Rockville, Middletown, New Haven, New Britain, Waterbury, Meriden, and Enfield.

Attorney Jacobson previously worked at the Hartford Public Library for over three years and represented clients before U.S. Citizenship and Immigration Services. She assisted hundreds of individuals with their citizenship, naturalization, and green card applications. Attorney Jacobson also worked at Lawyers Without Borders for about years, managing several U.S. Department of State grants ranging from $750,000 to $1.25 million. She launched, developed, and oversaw trial advocacy training programs in Africa and the Latin America and Caribbean Region, which involved training judges, prosecutors, and law enforcement officers to improve the prosecution of human trafficking, domestic violence, and wildlife trafficking crimes.

Attorney Jacobson is admitted to practice in Connecticut and in the U.S. District Court for Connecticut. She received her Juris Doctor (JD) from UConn School of Law and Master of Public Administration (MPA) and Certificate in Public and Nonprofit Management from UConn as well. Attorney Jacobson is deeply committed to working with local organizations to meet the needs of vulnerable populations and improving access to justice for low income individuals. She is currently the Chair of the Board of Directors of Charter Oak Cultural Center and has served on the City of Hartford Commission on Refugee and Immigrant Affairs since its inception in 2014. 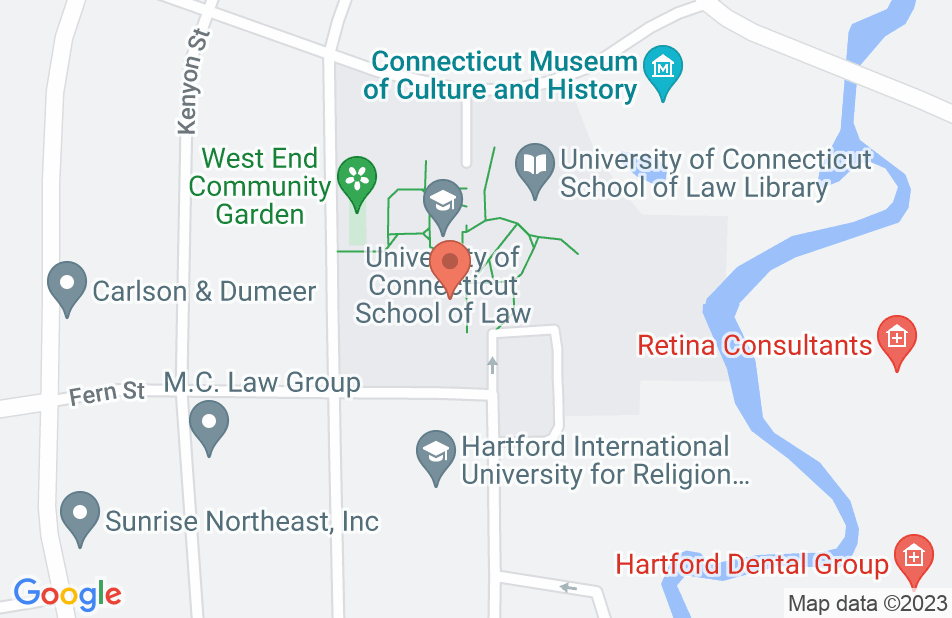 Attorney Jacobson was a breath of fresh air after some past experiences I had with other lawyers in the state of Connecticut. She actually cares about saving you money and being helpful for your future. I felt like she cared about my concerns and she was upfront and realistic with me with what my legal options and likely outcomes would be. I was thankful for her efficiency, intelligence, and compassion. She treated me with respect and also understood my difficult position and was helpful when I was (often) confused or scared. Most important of all, she cared about my children and that things were conducted in the best way for their sakes. I highly recommend Attorney Jacobson for your legal needs in family court, especially if you're a woman and you have a high conflict divorce with an abusive ex-partner. She will be clear with you about state law/family court and she will not make things worse because she's got herself organized and you will feel more secure with her by your side during the difficult times.
This review is from a person who hired this attorney.
Hired attorney

This was my first time going through a divorce and I cannot say enough great things about this wonderful person. Eva made me feel at peace during one of the most stressful periods of my life. Her professionalism is top notch. Eva explained everything to me in terms I could understand, she gave me options when I thought I had none and just made the whole experience as non terrifying as possible. If you are in need of a lawyer look no where else Eva Jacobson is the perfect fit for your case. I walked away feeling very pleased!
This review is from a person who hired this attorney.
Hired attorney

It was the worst time of my life, when I got a call from a woman wanting to meet with me to go through my case. The stress, thoughts of giving up that consumed me, disappeared the moment I saw her. The positive energy and confidence she exudes got me to trust her and trust myself in what I was doing was the right way. Forever grateful to a wonderful person.
This review is from a person who hired this attorney.
Hired attorney

Working with Eva was the best decision I could have made for my divorce process. Eva became more than a lawyer to me, she was my confidant, a supporter, and above all I felt that she wanted to get me what I needed because she believed I deserved it, at times she even fought for it harder than I did. going into my divorce I was nervous and afraid because of my ex, I didnt think I could face him or his family, but with the help of God and the strength and courage of Eva, she encouraged me and empowered me to fight for what's mine, AND TO NEVER GIVE UP!. IT'S safe to say we fought till the last drop of sweat. Eva is compassionate and she truly does this to help people, its not just about the money for her. At the end I GOT EVERYTHING I ASKED FOR PLUS MORE!!! when we got our judgment she was the first one to call me, AND LITERALLY READ IT TO ME WORD FOR WORD!! EVA IS AMAZING AND I HIGHLY HIGHLY RECOMMEND HER!!! YOU WON'T REGRET IT!
This review is from a person who hired this attorney.
Hired attorney

Just what we needed...

Eva was more than our lawyer, she was our advocate in a very difficult custody case. She knows the law very well; she also knows human emotions and how to direct people to the right choices. She was able to clearly show what was needed and how to reach the goals we wanted. We are very pleased with the results and reccomend her highly.
This review is from a person who hired this attorney.
Hired attorney

Attorney Eva Jacobson i am very grateful to you for helping me to obtain the best possible outcome on my divorced case.Thank you so much for your kindness and patience.The communication was great.I would really recommend attorney Eva Jacobson to anyone she's really good in what she's doing.she was extremely helpful communicated everything every step of the way and made me feel so at ease during the entire process.I absolutely would recommend her to anyone.
This review is from a person who hired this attorney.
Hired attorney

From the beginning Eva Jacobson was honest and up front. She stated that the process may be an up hill battle because the situation was unique. However, she was deterred she had a plan. When many other attorneys shied away from my case because it wasn't absolute Eva took it head on. She was very easy to work with. She explained how things would go and what she expected from you. She was straight forward from beginning to the end. After trying for two years to obtain disability being rejected and turned down for representation Eva was a god sent. She is great at what she does. I would recommend her to anyone that was sincere in trying to get result.
This review is from a person who hired this attorney.
Hired attorney

Eva, I wantto thank you for the wonderfull job you did representing me in my case. I feel a great relif that everything worked out for the best of my grandson. I feel tha you listened to everything i needed to expkain& also you explained anything i didnt understand. You area very kind & patient person, if ever need a lawyers for any reason i will not hesistate jn calling you, also willhave no worry in ever need a lawyer for any reason. I will not hesitate in calling, you, also willhave no worry in recomending you to anyone that needs a lawyer. I wish you good luck in the near future on everything that you do. My family & i with you the best. Marisol Rivera & Family.
This review is from a person who hired this attorney.
Hired attorney

Eva Jacobson is an angel working as a lawyer

Eva Jacobson always had my best interest at heart. She gave me a calming reassurance for me and my family. She thought of things I didn’t think about. Eva is so insightful and She taught me how to see and view situations in different ways. Eva always has my back and I am forever grateful to have worked with her.
This review is from a person who hired this attorney.
Hired attorney

I highly recommend Her

She gave me a sense of direction to follow in my case, and the results were great. Cannot quantify how difficult the law can be the common person, she help make the journey less stressful
This review is from a potential client who consulted with this attorney.
Consulted attorney
See all reviews

I endorse Attorney Jacobson. She is a very diligent and thoughtful advocate for her clients. I refer my own clients to her for criminal defense and immigration matters because of her ability to provide quality representation to them.