Doug has practiced law for over 44 years in D.C., New York, PA, CA and WA, trying cases there and in other states by association. He has obtained many settlements and verdicts up to $3.5 Million.  He currently focuses on serious injury cases, sex abuse and nursing home abuse in numerous states with his partners or in association with other attorneys and firms.

Over the past 20+ years, Doug has served variously on the board of Governors, as VP and Executive Committee Member of the Washington State Association of Justice--WSAJ--The State Trial Lawyers' Assn.  WSAJ  awarded Doug the prestigious Public Justice Award, given to only one attorney in the state of Washington per year.

Doug has been listed as a “TOP ATTORNEY” and "TOP PERSONAL INJURY ATTORNEY” in Spokane & Coeur D’Alene Living Magazine in 2017 and 2018 respectively.  Doug has been a speaker at Continuing Legal Education--CLE--seminars on litigation topics such as, Motion Practice, Video Recording Depositions and others.

Doug's pro-bono work includes; incorporating and co-founding "Heal The Bay" in Los Angeles . Successfully helping "Save the Ballona Wetlands" in L.A., co-founding, incorporating and chairing "Cup of Cool Water”, which helps street youth in Spokane, co-sponsoring/supporting/feeding students at a destitute school in Haiti, serving as Corporate Secretary of Episcopal Properties in Spokane which operates some 1200 units of low income housing in  Spokane, and helping indigent people and environmental issues, wherever he goes. 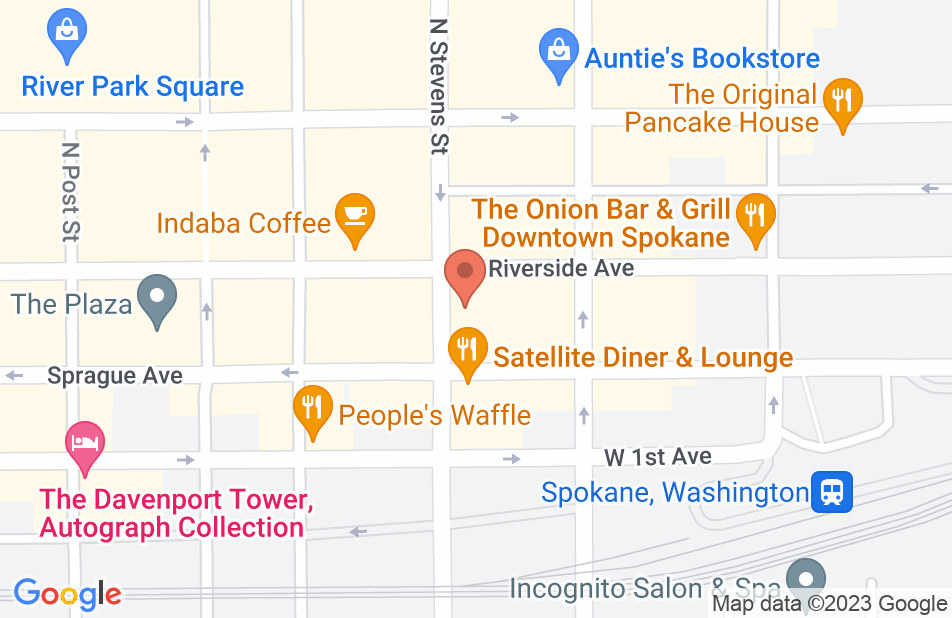 When Hope was Lost Doug was there

I lost my wife in a car accident; not even a week had passed and I was bombarded with huge medical expenses and a complicated mix of health insurance and car insurance that I did not fully understand. Doug helped me navigate the mess left behind and was able to negotiate very professionally with all the stake holders to maximize what I was entitled to as a survivor and to remove the liens against me. I don't know what I would have done if it were not for his professionalism and expertise in the area of car insurance. His work was beyond what I had even expected and I am extremely thankful for all his help.
This review is from a person who hired this attorney.
Hired attorney

Doug Spruance is an outstanding attorney! He is professional, prompt and he truly cares about people! Doug Spruance works tirelessly for his clients with compassion and empathy. This man deserves huge recognition as an outstanding attorney, for his service to people, his dedication to justice and his community!
This review is from a potential client who consulted with this attorney.
Consulted attorney

Doug is not your typical 9-5pm lawyer and he is not one of those lawyers that you are never able to talk to. Doug cares about is clients and understands the struggles they are going through due to their injuries. Doug called me several evenings just to see if there had been any progress with being able to get authorization for my MRI due to my traumatic brain injury and he contacted my insurance multiple times to try to get me reimbursed for money I had spent out of pocket for eyeglasses. Doug was genuinely concerned about my condition and making sure that I was able to get the treatment and tests that I needed. He goes above and beyond to help you anyway he can.
This review is from a person who hired this attorney.
Hired attorney

I would highly recommend Doug Spruance to anyone seeking legal help for personal injury cases or auto accidents. I feel he was able to negotiate a fair and just settlement for us after an automobile accident. H was always responsive to my questions and concerns, as well as being compassionate and understanding regarding injuries and frustrations due to the accident. He had been highly recommended to me by serveral persons who had received very good results from his representation. I feel confident giving him a very high rating.
This review is from a person who hired this attorney.
Hired attorney

Doug represented me in two cases involving clergy abuse in Spokane, Washington. He went above and beyond in my case, not just in competent legal representation, but in understanding and compassion. I do not think I would have made it through the agony of my situation without his guidance, kindness and understanding. He is a unique person, rare, and an outstanding lawyer and person. Steven Denny
This review is from a person who hired this attorney.
Hired attorney

Mr. Spruance represented me on a difficult contract negotiation for my video business involving some tough negotiations with multiple attorneys who were not being very forthright. He was able to renegotiate a lot of the bad parts of the contract so they were more fair and allowed me to get paid what I was owed on time. My customers ended up very happy with my work under the contract and they have sent me a lot more video recording and editing business. On another case he successfully sued someone who took my video work and did not pay me for it. The judge obviously knew Mr.Spruance and he was impressed with Doug’s argument in court. Both cases were not very profitable for Doug, but he promised to do the work, and he kept his word. Because of this I referred Mr. Spruance a friend who was involved in a very bad accident, and Doug got an outstanding recovery for of the client in this catastrophic injury situation. Mr. Spruance won the Public Justice Award from the Washington State Association for Justice in 2011. It is awarded to one attorney in the state of Washington per year and I understand it is quite an honor. I believe anyone who gets Mr. Spruance as their lawyer is frankly lucky to get him. He is very experienced, and I believe he works extremely hard for good results.
This review is from a person who hired this attorney.
Hired attorney

Doug Spruance is an answer to our family's prayers. This man recognizes truth immediately. He is compassionate; yet aggressive. He is tireless and committed. He is trustworthy and keeps in close contact throughout the process. He is wonderful, ethical, hardworking, very professional, and caring. One of the most outstanding human beings I have ever met in my 56 years. I just want to thank him publicly for being so dedicated to helping others. God Bless Doug and his family. We love him. If you want justice; call Douglas Spruance!
This review is from a person who hired this attorney.
Hired attorney

A Lawyer that Cares

Doug Spruance is a great lawyer. I think one of the many things that make him a great lawyer is that he cares very much. When I had questions about something time was taken on his part to provide me the answer. More importantly, as I was going through all the processes involved in my case it was nice to know and feel that the person I choose to be my lawyer cared about me as a person and not just as a client.
This review is from a person who hired this attorney.
Hired attorney

Doug Spruance is a great lawyer. He puts his all in each and every case he takes on, his clients come first and foremost. He worked tirelessly to get a better settlement on my auto accident than I expected. Doug made me feel valued and respected, I highly recommend Doug both as an attorney and a person.
This review is from a person who hired this attorney.
Hired attorney

Doug is a Great Lawyer

Doug Spruance is a great lawyer. I can say that as a professor, lawyer, and former client myself that Doug is a smart, thoughtful, and talented attorney with a wealth of experience. Doug is one of the best trial attorneys in the state if not the country. Doug obtained excellent results in my auto accident case. Doug cares about the community and the environment, winning the Washington State Association of Justice’s Public Justice Award for 2011. This prestigious award is given only to one outstanding attorney in the State annually. Among many other things, Doug as pro-bono counsel, was the only plaintiff’s attorney in the case of Moran Prairie Neighborhood Association v Spokane County, et al. Doug fought to protect the wetlands against tough opponents and Doug won. Doug cares about his clients and his community- as demonstrated through his actions his entire career. Clients are lucky to have Doug as their lawyer and colleagues are lucky to work with him. Doug is an inspiration.
This review is from a person who hired this attorney.
Hired attorney

I wholeheartedly endorse this lawyer. I have known Doug for years and worked cases with him. He is skilled, conscientious and diligent. Doug has a passion for the cause of his clients that few lawyers can match. I would recommend Doug to anyone needing skilled representation in a personal injury or wrongful death case.

I have known this attorney for a number of years and I am aware of his knowledge and expertise in the personal injury arena, I am aware of his recent success in realizing a significant recovery against Spokane Transit Authority. I would highly recommend Doug as an Attorney and if I needed an attorney I would hire him myself.

I have known Doug since I was in law school almost 20 years ago. Since becoming an attorney, I have had a number of matters with Doug. He is a very good lawyer with a heart of gold. I would recommend Doug to anyone needing a personal injury attorney.

I endorse Mr. Spruance without hesitation. We have been co-counsel on several complex sexual abuse, personal injury, and nursing home neglect matters. Mr. Spruance also served as a Guardian ad Litem for my minor client in a highly contested abuse case. He is professional and hardworking. He also puts his client's interests before his own. You cannot hire a better lawyer than Doug to represent you or your loved ones.