The most experienced and highly regarded attorney who has obtained over $185,000,000 for employees.

Before establishing Anticouni & Associates in 1979, Bruce Anticouni worked from 1971 until 1974 as a trial attorney for the National Labor Relations Board.  From 1974 until 1979, he was Employment Counsel and later, Vice President and General Counsel, of a New York Stock Exchange company which employed over 50,000 Employees in over 1300 retail locations throughout the United States.

Mr. Anticouni obtained a Bachelor of Arts Degree in Philosophy from California State College at Long Beach and his Juris Doctorate from the University of California, Hastings College of Law.  He is admitted to the United States Supreme Court, United States Court of Appeals, United States District Court, California Supreme Court, California Court of Appeal and the California Bar.  Mr. Anticouni has served on the Board of Directors for a number of for-profit and non-profit organizations.  He is a member of National Employment Lawyers Association, California Employment Lawyers Association, National Lawyers Guild, National Employment Law Project, American Association for Justice, Consumer Attorneys of California, Santa Barbara County Bar Association, Los Angeles County Bar Association, Ventura County Bar Association and Workplace Fairness.  He serves as a Settlement Master in the Santa Barbara Superior Court.Mr. Anticouni has received a LexisNexis® Martindale-Hubbell® rating of AV Preeminent®.  AV Preeminent® is a significant rating accomplishment - a testament to the fact that a lawyer’s peers and judges rank him or her at the highest level of professional and ethical excellence. He was once again named one of the California’s top rated lawyers by the Los Angeles Times and the San Francisco Chronicle in 2013-2017. Mr. Anticouni is a "Superb" (10.0 out of 10.0) by AVVO and recognized as one of the top 100 employment lawyers by the National Advocates in 2015. 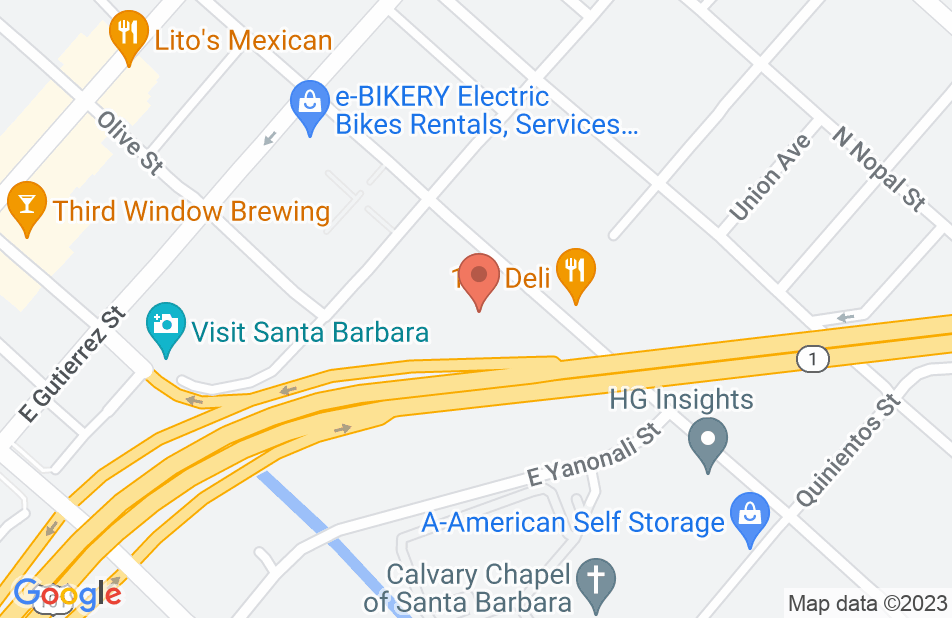 Bruce and Tristan patiently gathered information from each of our group and counselled us wisely through mediation. I especially appreciated their availability to all of us. They explained legal issues and managed to get all of us to a good understanding of our case. It became obvious to me that through Bruce's professional longevity in Santa Barbara, he has developed relationships with mediators, other professionals, and the community members in general. This was instrumental in the good outcome of our case.
This review is from a person who hired this attorney.
Hired attorney

I would say that I was lucky and grateful to have a lawyer of Bruce's ability, understanding and empathy. He understands the complexities of a case and is not afraid to pursue it aggressively. I would rate him a 10 on a scale of 1-10
This review is from a person who hired this attorney.
Hired attorney

I would like to extend my appreciation and gratitude to Bruce and Nicole for their diligence on my case. Bruce was very responsive and continuously kept me apprised of status and updates. This was the first time I have had to utilize legal services in this capacity. I was impressed with their service. Excellent service and responsiveness.
This review is from a person who hired this attorney.
Hired attorney

Bruce Anticouni represented me in a workplace matter and I was beyond impressed with the whole experience. He and his team are responsive, detailed, and a pleasure to work with while going through a difficult experience. Bruce provided excellent advice and brings an incredible wealth of knowledge to the table. I believe I ended up with a positive outcome based on having Bruce and his firm as my representation.
This review is from a person who hired this attorney.
Hired attorney

If you were a victim of discrimination, had you employment contract continually violated but continued your employment because you needed to provide for your family, do what I did. Hire Bruce Anticouni to represent you. Anticouni and Associates promptly and defly leveled the playing field, ensured that my rights were respected, obtained a fair and just settlement and compensation for my family and myself. Thank you Bruce, thank you Nicole. You are simply the best.
This review is from a person who hired this attorney.
Hired attorney

I know this may sound odd, but for having to deal with such an unpleasant situation, Bruce Anticouni and his team sure made my two year journey to justice relatively painless and even somewhat enjoyable. I was able to get my point heard and I feel as if Bruce has made things right and me feel whole once again. What more can one ask for... James
This review is from a person who hired this attorney.
Hired attorney

Bruce was very professional and listened to what I had to say and guided me in the right direction. If you are looking for a great lawyer Bruce is your man.
This review is from a person who hired this attorney.
Hired attorney

It is with great pleasure and without hesitation that I recommend the services of Anticouni & Associates. Bruce Anticouni is very knowledgeable and extremely caring. He looked out for my best interest and was always available if I had any questions or concerns. This was a stressful time for me and Bruce made a difficult situation easier. I had never needed legal services before and Bruce took time to explain the entire process. His expertise enabled me to get fair settlement in a short amount of time. I trust him and know that he would provide others with the same remarkable service he gave me. I would definitely refer family and friends to him. I am grateful for all that Bruce, Nicole and his team did for me.
This review is from a person who hired this attorney.
Hired attorney

Thank You Bruce Anticouni and Staff

Bruce Anticouni and staff were very professional, attentive and a pleasure to work with. Bruce kept me well informed throughout the process and answered all of my questions in a timely matter. Many thanks to Bruce and his staff for their assistance!
This review is from a person who hired this attorney.
Hired attorney

I am proudly compelled to fan the flame of those few taking pride in their work and ultimately making me feel like I am not a number. Bruce Anticouni and his staff went above and beyond expectations! Employment Law is not my field of expertise, so, after a recommendation from a family friend, I met with Bruce and his staff for consultation. Bruce listented, questioned, and ultimately gave me his honest legal opinion; which resulted in a favorable settlement! I can not recommend Bruce Anticouni more. He brought a just settlement to an unfavorable labor situation.  Thank you Bruce Anticouni!
This review is from a person who hired this attorney.
Hired attorney
See all reviews

Steven Chanley, Employment and labor Attorney on May 1, 2017
Relationship: Opposing Counsel on matter

Bruce Anticouni has been a successful, top-echelon labor and employment lawyer for decades. He is very well respected by his peers, and does a great job for his clients. As an attorney who has opposed Bruce on many occasions, I always appreciate his approach, which relies on professionalism, intelligence, deep experience, and keen attention to detail. Bruce is a very zealous advocate, yet is never uncivil or one for gamesmanship. Instead, he gets things done with outstanding lawyering. I recommend Bruce Anticouni in the highest possible terms.

I endorse this lawyer. I worked for Bruce Anticouni for eight years as an associate attorney in the area of employment law ending in 2008. It was a pleasure working for him and he was a great mentor for me in all areas of practice. He is excellent with his clients, is professional in running his business, has an incredible legal mind, and is a highly-skilled negotiator. I learned a great deal from him and often ask myself what he would do when presented with challenging issues in my practice since working there.

I endorse this lawyer without qualification. I have known about Bruce's practice since I started practicing law in Santa Barbara and Ventura counties in 1984. A significant percentage of my own practice for private and public offices has involved employment, labor, and civil rights, representing employers and employees. I have been adverse to him or his associates and aware of many cases he handled. My conclusions: Bruce is a formidable adversary and advocate for the cases he accepts; he is tenacious; he shows good and gutsy judgment and commitment when assessing case merits and taking cases. Finally, I've been long impressed with Bruce's and his wife Judy's generous and enthusiastic support of and interest in local community and bar efforts, leaders, and civil and legal rights organizations.

Bruce Anticouni is one of the most knowledgeable and distinguished employment attorneys in California. His concern for each client and case is the gold standard of how every attorney should be with their clients. Bruce is an absolutely brilliant attorney.

I had the opportunity to work with/for Bruce on a litigation matter that had been pending for several years. Bruce was a relatively recent participant in the proceedings and accordingly had to process significant quantities of information to get up to speed in what was a very complex, multi-party litigation matter. Notwithstanding the complexity of and substantial history surrounding this matter, Bruce was able to quickly get up to speed, separate the pertinent information from the voluminous materials generated, and immediately focus on the major issues. Bruce's participation was indispensable in terms of facilitating client communications, specifically with regard to communicating complex litigation proceedings, important developments and case analysis to the client and facilitating the attorney/client relationship. In addition, Bruce was always courteous, prompt and professional. I would not hesitate to retain Bruce personally or refer others to him.

There is nobody in the Santa Barbara area who knows more about representing plaintiffs in employment law matters than Bruce Anticouni. I have been adverse to Bruce on more matters than I can count over the years and while he is an fierce advocate for his clients, I can also rely on him to exercise the judgment and professionalism that allows us to have a positive relationship despite our passionate disagreements.

Bruce and I have worked together on several wage and hour class actions. He is extremely knowledgeable about employment law and an excellent attorney and advocate for his clients.

Betty Jeppesen, Employment and labor Attorney on Feb 10, 2015
Relationship: Worked together on matter

I have worked with Bruce Anticouni several times during the 32 years that I worked as General Counsel for a $100,000,000.00 company. He was always an excellent source of information; has a perfect demeanor and achieved great results.

Over the years, Bruce's firm has been opposing counsel on 3 or 4 employment matters. Bruce and his partners/associates provide conscientious, strategic representation for their clients. I have been impressed with the quality of their papers and their focus on the client's best interests, while having professional, courteous relationships with opposing counsel.