Daniel S. Rose, Esq. has been practicing Personal Injury for 19 years.  He strives to get the best results for his clients.  He believes in the client being part of their case and understand the all aspects and essentially getting an understanding of the law that involves their case.

Originally from New York.  Daniel Rose graduated Thomas Cooley Law School in Michigan in 1996.   Then admitted to the California Bar in December of 1996.  Mr. Rose has been a residing in San Diego County since graduating from Law School.

He has many results in that were pubished in legal publications including a case that went up on appeal to the California Supreme Court that changed law, Bouton v. USAA et al. where the insurer claimed the Claimant was not a resident of the household and not covered under the policy.

Mr. Rose recently had the privilege representing a plaintiff in trial and winning the case where the insurance claimed there was no insurance coverage.  The passenger in a vehicle driven by his friend and stepson of the insured (stepfather) later claimed his stepson stole the vehicle.  The jury held the stepfather liable under the theory of negligent entrustment and permissive use.  Originally this claims was denied.  Mr. Rose's client was also awarded attorney's fees and punitive damages against the drunk driver who caused the collision. 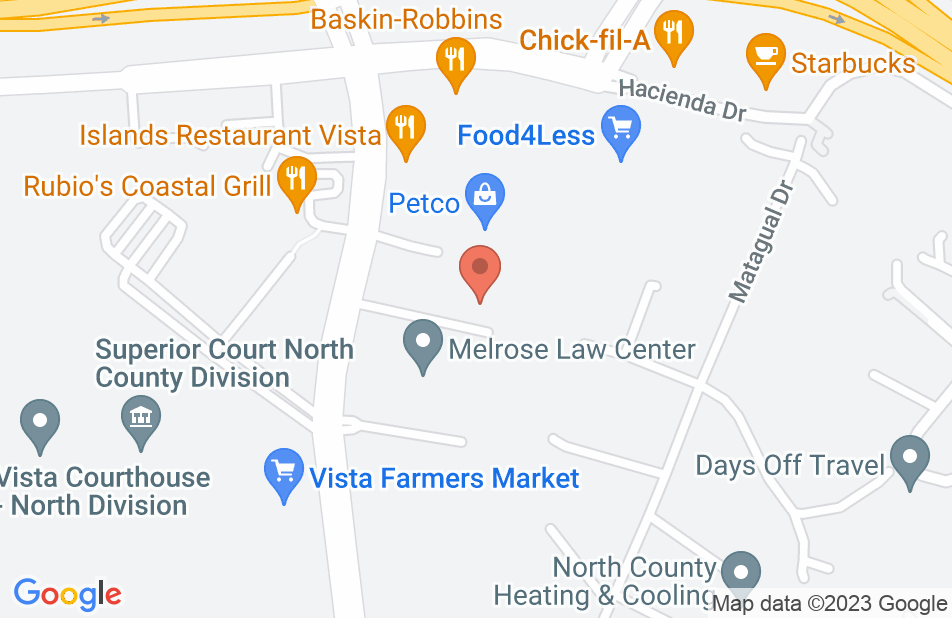 Daniel did a great job with my case from day 1. It took awhile, but it was because of how long things took on the other party, my surgery recovery, and physical therapy. He kept in contact with me and told me what I needed to do if there was something that I needed to do. I changed my health insurance from a PPO to an HMO and I didn't think it would affect anything because I was on a lien, but I guess it would have affected it heavily if I wouldn't have done what Daniel said to do. He ended up getting me the full amount allowed. He explains everything in detail and isnan excellent lawyer. I would recommend him. My wife used him before me and he did a great job with her also.
This review is from a person who hired this attorney.
Hired attorney

I have known Daniel for over 20 years. He is an exceptionally well qualified personal injury attorney.

Dan is a very experienced and knowledgeable attorney who gets tremendous results for his client. I endorse him whole-heartedly.

Daniel Rose is an exceptional personal injury attorney. He is highly experienced and very savvy in the courtroom. I have personally worked with him and his staff on multiple cases and I wouldn't hesitate to recommend him to anyone.

Mr. Rose is a fellow lawyer in the community. Mr. Rose is sharp, dedicated and truly cares for his clients. Not only is Mr. Rose an exceptionally skilled attorney who achieves results, but he is also a great person with a good heart. These qualities distinguish him from many others within the profession. I wholeheartedly endorse Mr. Rose.

I endorse Mr. Rose. I have known him as a colleague since 2001. He has an excellent work ethic, good communications skills, and is an effective advocate.

Daniel and I worked on a complex personal injury action together. Daniel showed a keen legal mind and was instrumental to the successful resolution of the case. Daniel also exhibited great people skills, in handling the client and with respect to the mediation process. He's a great lawyer. I endorse this lawyer.

I endorse this lawyer. Daniel Rose is an excellent attorney. His expertise in the field is unparalleled.

I endorse this lawyer because of his professionalism, persistence, evaluation skills, strong work ethic, ability to pay attention to details and sound judgment. Daniel really cares about his clients and they seem to really appreciate the relationship.

I endorse this lawyer. Daniel Rose is one of the top personal injury attorneys in San Diego. He is very skillful. He has performed magically on some extremely difficult and challenging cases. I have referred many cases to Daniel and all the clients rave about how great he is.

I endorse this lawyer. Daniel has been a great attorney for many years. Specifically, he has worked with many injured victims in North County San Diego to achieve great results. Oftentimes, our firms work closely together so that our clients have the best representation.

I endorse this lawyer because he is a good person, and a skillful lawyer. I used to do insurance defense work and was the defense lawyer on a few of Mr. Rose's personal injury cases. He was always prepared, and able to present his clients claims in a professional and persuasive manner. He was pleasant to deal with and made it easier for me to want to help him get better offers for his clients from the insurance company.

I endorse this lawyer. I have known Daniel for over 15 years and he is a wonderful person and a fabulous attorney. he really cares for his clients and obtains fabulous results.

Daniel Rose is an exemplary personal injury attorney whom I know well. We have collaborated on several matters and I value is analysis and detailed consideration on complex issues. We also had the opportunity to work together on a car accident trial which I would do again if the opportunity arose. If you are considering representation in North San Diego county for a personal injury matter, Daniel Rose should be at the top of the list.