Recognized by several publications — and his peers — as an elite litigator, Paul has protected personal injury victims for over 18 years.  His tireless efforts have leveled the playing field against massive insurance companies and large corporations.  In just over the last decade, Paul’s settlements and paid jury verdicts have eclipsed $250 Million.  In more than 80 cases, Paul has orchestrated settlements at or above $1 Million.

Paul attended the University of Idaho for law school, where he was a published member of the law review.  He graduated in 1997 with a Bachelor of Science degree from Idaho State University, where Paul majored in history with a chemistry minor. Paul began his legal career in 2000, clerking for the Honorable Chief Justice, Myron E. Leavitt, of the Supreme Court of Nevada.  Paul then went to work for Nevada’s then-premier litigation firm, Lionel Sawyer & Collins and began his personal injury career in 2003.

In 2017, Paul Pays It Forward, was created.  The non-profit Foundation is focused on charitable contributions in a variety of areas.  Most notably, a portion of each settlement is donated to the Make A Wish Foundation and St. Jude Hospital to assist in the fight against childhood cancer.

Several publications recognize Paul for his success as a litigator, including:

Honored as one of the of Elite Lawyers of America

The Global Directory of Who’s Who Top 100 Rated Lawyers

Recognized as one of Rue Rating’s Best Attorneys of America

Member of American Association for Justice

Member of The National Academy of Jurisprudence

Member of The American Society of Legal Advocates

Member of The Association of Plaintiff Interstate Trucking Lawyers of America 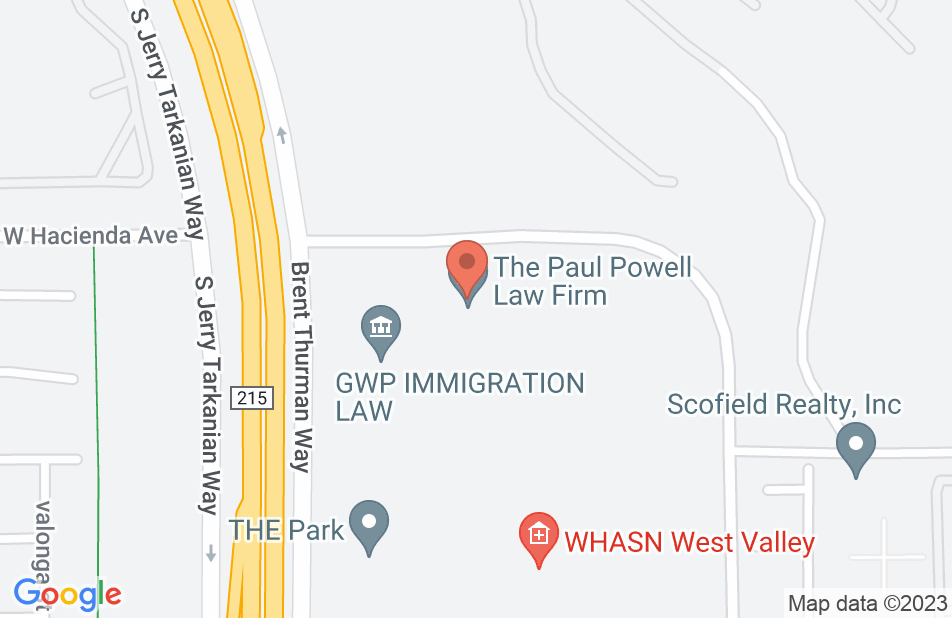 Awesome Team to have on your side

Me. Powell's team went beyond what they were committed to do and recovered property damage as well. They handled my case quickly and was there for me anytime I had questions. Gladis was awesome. I will always call Paul Powell!!
This review is from a person who hired this attorney.
Hired attorney

Paul did exactly what I'd expect a skilled attorney to do. I was left without anywhere to go once my insurance company put me in a tough place after my car accident. The insurance company knew I wasn't at fault, but they still wouldn't help. Paul was in constant communication with the insurance company and fought on my behalf. He fought for the money I needed to undergo medical procedures that alleviated my pain. Thanks to him and my medical providers I feel much better. I can't thank Paul enough.
This review is from a person who hired this attorney.
Hired attorney

I would like to express my sincere appreciation and thanks to the Las Vegas staff and Attorney Paul Powell's Law Firm, who professionally handled my auto accident case of 9/14/18. The staff is always polite and professional. Altrisha was and is amazing in getting the job done. Linda
This review is from a person who hired this attorney.
Hired attorney
Paul Powell's response: Thank you for your incredible review, Linda!

I was in a rear end accident and signing up with The Powell Law Firm has been one of the best decisions for me. The staff genuinely cares for their clients and tried their best to assist in whatever I needed. The communication was on point from beginning to end. I never had a problem with getting my questions answered or trying to get a hold of someone in the office as updates were always provided to me whenever I asked. My treatment was taken into consideration and was impressed of how often I was getting calls just to check up and see how I was doing/ feeling. The whole duration of my case went pretty smoothly, I didn't have to do much except get better. For the most part they handled everything on their own, which I am grateful for. I'm very pleased with my experience and the people of The Powell Law Firm!
This review is from a person who hired this attorney.
Hired attorney
Paul Powell's response: Altricia, thank you for your incredibly kind words. Our focus is client experience, communication, and making sure you get better! We are so grateful that we were able to take care of you during this difficult time.

I love this place!

I was highly doubtful hiring attorneys but this office made it so simple and I would 10/10 recommend!
This review is from a person who hired this attorney.
Hired attorney
Paul Powell's response: Charley, hiring an attorney after an accident can be scary, but we pride ourselves on explaining the process and making sure you are taken care of in all aspects of your case. We appreciate your business and thank you for the great review!

More than just a billboard attorney!

Paul and staff were great. My case before switching to him was dragged along! I'm glad I switched!
This review is from a person who hired this attorney.
Hired attorney
Paul Powell's response: Kristen, we are so happy we could expedite the process for you and handle your case efficiently. If you ever need us again, it will be our pleasure to take care of you! Thank you for your kind review.

My life was turned upside down when I was hit by a drunk driver. Paul was amazing and helped every step of the way. Thanks Paul Powell
This review is from a person who hired this attorney.
Hired attorney
Paul Powell's response: Thank you so much for your kind review. We are very happy we were able to assist you during this life-changing time!

I personally didn’t think I was going to get anything from the car accident and you guys said I would and actually kept your word
This review is from a person who hired this attorney.
Hired attorney
Paul Powell's response: Eryn, we are so happy to hear that we exceeded your expectations in terms of your settlement. It was our pleasure to serve you and we appreciate your review. Thank you!

Since the beginning, the Powell Law Firm made me feel comfortable and were very professional. They go beyond what you expect to help you out
This review is from a person who hired this attorney.
Hired attorney
Paul Powell's response: Zackary, it is our pleasure to go above and beyond for you. Thank you for your review and for being our client!

Thanks for everything. I appreciate the kindness of everyone at the law firm. My case was quick and everyone helped me throughout the whole thing. I was able to pay my bills and stay on track while I was healing thanks to Paul. I really appreciate someone coming out to my house after the accident. I was so surprised someone came to my house and met my needs. Thanks guys!”
This review is from a person who hired this attorney.
Hired attorney
Paul Powell's response: Our pleasure, Layeda! We understand it may be difficult to come to our office if you are injured from an accident, so we want to make your experience as smooth as possible. Thank you for your review!
See all reviews

Paul is a very thoughtful smart lawyer. He has tremendous experience from start to finish of a personal injury case. Very few lawyers have the trial experience that Paul has with the verdicts and success he has obtained for his clients.

Paul is never afraid to fight the insurance companies to get the best results for his clients.

No one else you'd rather have on your side in the Courtroom. Great lawyer and a good guy.

Paul Powell is an excellent attorney. He is experienced and has and in-depth knowledge of the law and the medicine. This gives him a huge edge over other attorneys.

Paul is a very knowledgeable lawyer who zealously advocates for all his clients. If you have any needs in the Personal Injury field do not hesitate to contact him.