A boutique law firm with over 30 years experience serving the Las Vegas community.

Anthony P. Sgro is a partner and founding member of Sgro & Roger, LLC. After attending the University of San Diego for both his undergraduate education and law school, Mr. Sgro returned to Las Vegas and began practicing primarily in the area of criminal defense. In short order, he became a “death qualified” attorney and focused on defending those charged with capital murder offenses.
​
After trying numerous cases, Mr. Sgro used his unique trial experience to branch out into other areas of law, including personal injury, entertainment, and business law. Remarkably, he found his trial skill set transferred to those areas as well. Since the beginning of his career, Mr. Sgro has tried over 125 jury trials in both the civil and criminal arena. Most notably, as trial counsel, Mr. Sgro secured numerous acquittals in criminal cases including acquittals in extortion cases, drug cases and murder cases. He has been awarded millions of dollars by way of jury verdicts in medical malpractice cases and in personal injury cases. He also secured the largest slip and fall personal injury verdict to be awarded against Walgreens corporation, as well as a real estate trial verdict in excess of $55 million. Notably, that same trial experience allowed him to resolve the largest settlement for a single plaintiff personal injury case in Nevada history, which exceeded $30 million.
​
Several years ago, Mr. Sgro once again expanded his practice and business interests. He had the privilege of representing, and routing Prince’s 2013 West Coast tour, which spanned 13 U.S. cities. Most recently, his legal experience has allowed him to participate in the gaming arena, including both local and overseas gaming operations.
​
Years ago, Mr. Sgro teamed up with long time friend David Roger to create the firm that exists today. Mr. Roger is the former District Attorney for all of Clark County, Nevada, and he served in that capacity for approximately 25 years.

​Mr. Sgro recently celebrated his 30 year anniversary of his practice of law at an intimate gathering of family and friends. 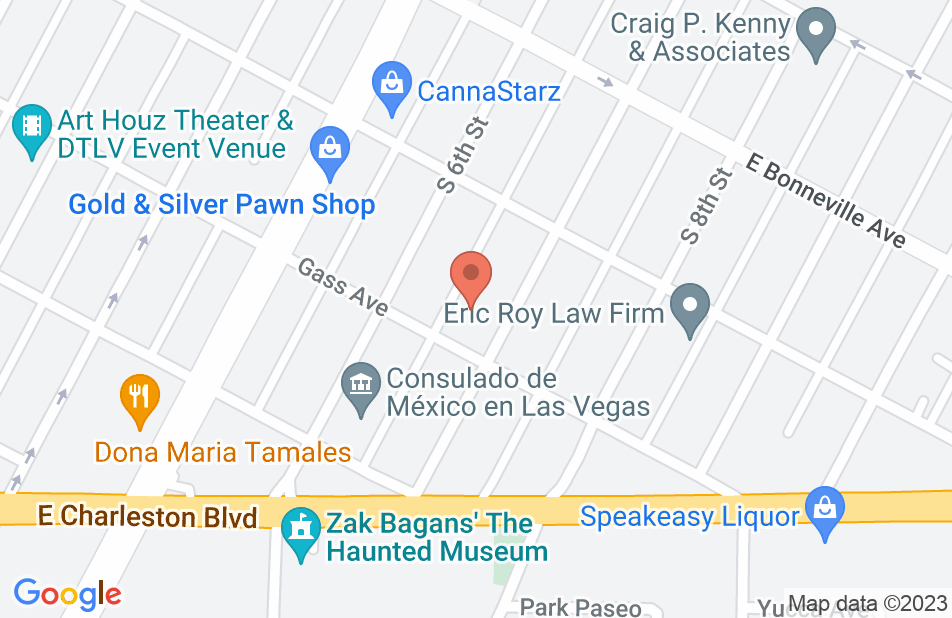 My father was rear-ended while completely stopped at a light; clearly, the other driver wasn’t paying attention at all and hit my dad’s car. We tried just going through insurance initially but it seemed like we couldn’t get their time of day. After a friend of the family told us about Tony and his firm, we called and they actually took good care of us. From the initial consultation with ernesto, to the countless phone calls we had to make to the firm for updates and treatment adjustments, each time we didn’t feel like we were being ignored or put off. If you actually want a lawyer, and a team, that will help you every step of the way, call Sgro and Roger. My dad and I had never used an attorney before and it was a good experience, especially because all of the losses we had were compensated.
This review is from a person who hired this attorney.
Hired attorney

I was in an accident and didn't think that Sgro & Roger did personal injury cases; I went to their website and found that they recently began taking on PI cases so I decided to give the office a call. I was impressed with how nicely I was treated by the attorneys, specifically Mr. Sgro and Meredith Weiner. They made me feel like my case was just as important as the rest of the cases they must've been working on. Plus I got reimbursed for the cost of my medical treatment and damage to my vehicle. I'd recommend this office to anybody in the city.
This review is from a person who hired this attorney.
Hired attorney

Several years ago I worked with Tony Sgro on a small criminal matter. He and his associates were always on top of my case and never let anything slip. It was very easy to get ahold of the firm and definitely worth the money to get a private attorney and not an appointed attorney. Considering going back to his firm to get my records sealed. Great experience.
This review is from a person who hired this attorney.
Hired attorney

I wanted to take the time to recommend Tony Sgro for his hard work and dedication to my son's case. When I got a phone call from my son that he was in jail and convicted of armed robbery, I was not sure what to do. I turned to one of my friends who recommended Tony Sgro. I highly recommend him to anyone that needs an attorney. He is highly qualified and well respected throughout the community. I was very lucky to hire him for my son as he has turned his life around.

Anthony Sgro is one of the best attorneys I have ever worked with. His knowledge and dedication of being a lawyer is remarkable. In 2005, I was charged with tax evasion. Before being charged, I had never even received anything more than a traffic citation. I was so fearful that I would lose everything I worked so hard to acquire, that I hid it from my family and friends. I knew I needed an attorney right away, so I confided in one of my friends who practiced family law. He told me to call Anthony Sgro because he was one of the best criminal defense attorneys in the community and had worked with him in the past. I called him immediately and I would probably say that was the best decision of my life. He handled my case in a professional and knowledgeable matter. I am glad that I listened to my friend by calling Mr. Sgro. I could have spent many years in prison but with Mr. Sgro’s help, I was able to avoid prison altogether.

Mr. Sgro did a great job in advising me the options I had regarding my case. He is an excellent Attorney. I first met him in 2000, when I was charged with drug trafficking. I had a pretty extensive case and I wasn't sure what was going to happen. Mr. Sgro represented me and was able to reduce my charges. Since then, I have referred many of my friends and acquaintances to Mr. Sgro. He is a highly respectable Attorney and I would recommend him to anyone.