The next generation has returned to serve the legal needs of our community. Nick Oswald is the second son of Andy Oswald, and was born and raised here in Hutchinson. After completing his undergraduate studies at Wheaton College in Wheaton, Illinois, Nick received his law degree from the University of Kansas Law School. While in law school, he served as a judicial extern for Chief Judge Robert Fairchild in the Douglas County District Court. Nick also served as an Associate Editor for The University of Kansas Law Review, which is a student-edited journal of legal scholarship. He is licensed to practice in the State and Federal Courts of Kansas and Missouri.

Nick is a parishioner of Holy Cross Catholic Church in Hutchinson. He shares his home with his wife, Emily, their newborn son, Logan, and their feline companion, Henry. Nick and Emily also volunteer at the Hutchinson Animal Shelter as a foster home for abandoned kittens. 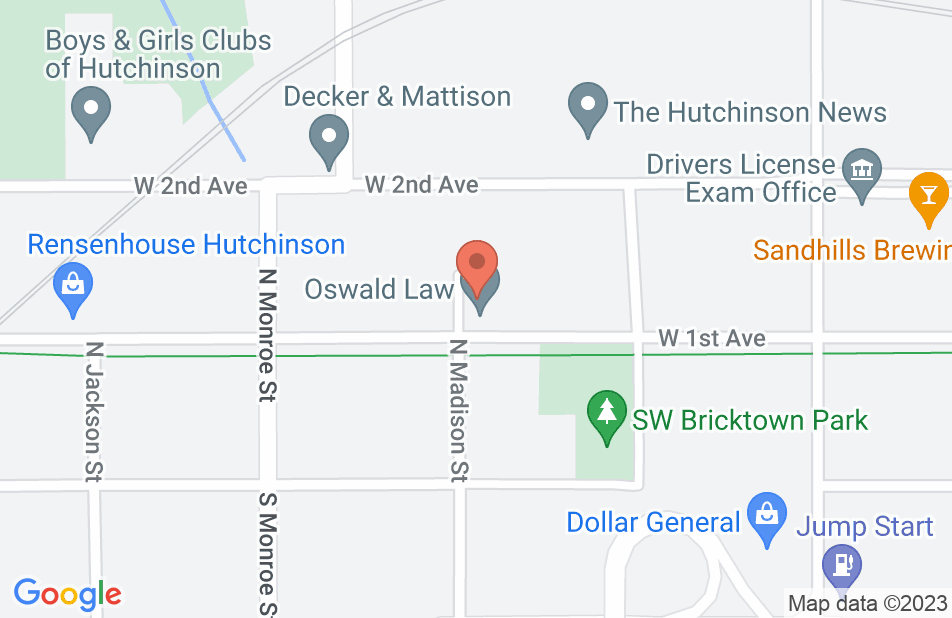 Nicholas Oswald is a fantastic attorney, was able to lower my Charge from reckless driving. He is very professional and gives you communication others won’t.
This review is from a person who hired this attorney.
Hired attorney

It has been a year or 2 now but I was looking at my 3rd DUI which is a felony. My stubbornness got me into the mess because i felt the assisting police officer did not follow protocol by requiring a breathalyzer even though I completely passed the field sobriety test. It was an idiotic move to not take it because I had only a half glass of a mixed drink 4.5 hours prior to the initial stop. Either way it goes, my decision costed me tremendously but if it were not for Nick’s persistent demanding of all evidence and his absolute desire to have justice served regardless of my initial response of action, I would still be dealing with the consequences. Because of Nick’s knowledge of actual written policies and protocol of what the officers clearly undermine on a regular basis (my personal opinion/experience that Nick was truly compassionate and understanding of), he not only got me the justice I deserved regarding this case, but basically forced the prosecuting attorney to toss the case completely. Also, because he was aware of the 2 sided existence of the ways to lose your license in this case, he immediately responded to my initial call regarding my case and requesting representation, to advise me of what action to take immediately so that I did not lose my license while I was fighting the charge! He was always quick to respond to any questions or concerns and I never even had a trial. Because, like I said, the case practically got dismissed as soon as the proper evidence was not provided and Nick did not accept anything but what was absolute justice! I will definitely request his representation from now on and always refer anyone to him! He’s really good and knows the law and will always find YOUR justice and demand it be served! I honestly cannot believe there are not more people who have reviewed him because I’ve heard other amazing stories of winning cases with different types of cases. Nick, YOU ROCK! And thank you very much!
This review is from a person who hired this attorney.
Hired attorney

Out of all of the attorneys that I've had for all my different cases, nick Oswald is the only one that I've used more than once. Would highly recommend as he has always done his best to get the best out come through it all
This review is from a person who hired this attorney.
Hired attorney

The shitstorm I’ve been through is awful. This guy helped me out. Paid attention to my problems, fast and fair. I’d recommend him to anyone who asked.
This review is from a person who hired this attorney.
Hired attorney

I retained Nick Oswald for my child custody case and he has clearly understood my case and represented me fairly and timely. I have had other child custody attorneys in the past that did not properly represent me or even return my calls once retained. Nick Oswald has been my voice in this for the months I have had him represent me and as such has fairly represented my concerns and focused on me as an individual. He returns every call promptly and is the most professional child custody lawyer I have ever retained. I recommend this lawyer 100%!
This review is from a person who hired this attorney.
Hired attorney

I'm proud to see my son serving the same legal community I've been working to help my whole career. It's a unique privilege to now work together!