Thomas Field lives in Chicago with his wife and two sons and enjoys fitness, traveling and fine dining. 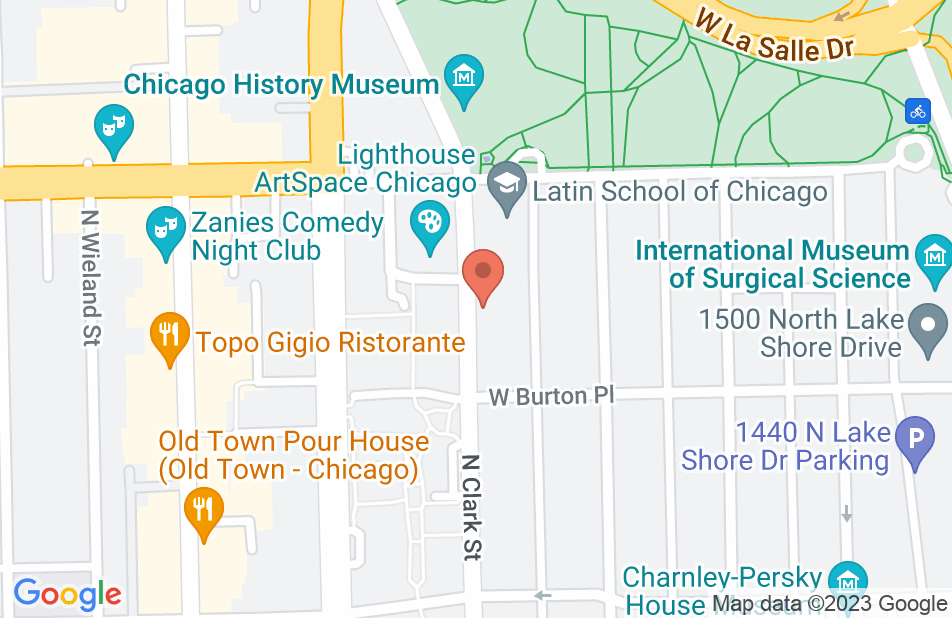 His introduction to a difficult set of legal matters that involved heavy emotions and nuanced logistics instantly put me at ease. Throughout, he proved himself as confident, strong yet compassionate and astute person who heard my goals and wove them into his expertise to come up with best solutions. He was reliable, consistent, thorough. I am very grateful it for him and his congenial team members that helped us cross the finish line with the goals met and without residual consequences.
This review is from a person who hired this attorney.
Hired attorney

Great Guidance Throughout a Difficult Process

Tom did an excellent job during the initial consultation of listening to me and my top three priorities. I interviewed five different divorce firms and chose Tom because of his active listening to my needs. Over the 18 months of my divorce proceedings, he never lost sight of those stated objectives and made sure that we dealt with each one of them thoughtfully, strategically, and in the order and manner that we discussed in the initial consultation. Tom was efficient, always available via e-mail/text/phone, and he staffed my case with terrific talent that "got it" as he did. Therefore, we had very few misunderstandings during my case. The end results were very satisfying in regard to meeting my objectives of children/parenting agreement, maintaining the home, and a good outcome financially -- and exceeded expectations on the financial settlement in fact. All of this was completed with efficient billable hours across the team. I would not hesitate to recommend Tom and his team. In fact, I now consider Tom to be a friend, and I look forward to staying in touch.
This review is from a person who hired this attorney.
Hired attorney

Tom and his team were nothing but exceptional and professional. They helped me to make some tough decisions and navigate very well through what was undoubtedly the worst situation of my life. They were always there to listen as people (not just to increase billings), provide their decades of combined expertise, recommend appropriate resources from their vast professional network and ensure that rational thinking prevailed. I highly recommend this team. They know what they are doing and they have the right professional relationships to assist their clients.
This review is from a person who hired this attorney.
Hired attorney

I hired Thomas for a prenuptial agreement, including the writing. He knew that I was in a hurry and everything went smoothly, without any issues. Thomas and his coworkers always replied to my emails fast. Couldn’t have asked for more.
This review is from a person who hired this attorney.
Hired attorney

Now that a few years have passed since my divorce was finalized, I wanted to thank Tom for his work on my case and give him the credit he deserves. Background: I am an attorney and Tom came to me as a referral from an attorney/mentor of mine who’s opinion I trust implicitly. My situation was particularly unique and unnecessarily complex due to my ex-wife’s personal and familial relations within the domestic relations division of the courthouse. Accordingly, I needed the “right” attorney who would command the respect of the court. I chose Tom because he was that person. Process: As an attorney, I had my own opinions about how I thought the case should be handled. This probably made me a “difficult” client (as attorneys usually are). Tom complied with my reasonable requests, but did -- approprately -- draw the line on other matters. He understood the situation and refused to play the “games” his opposing counsel did. Further, as an attorney, I know without doubt, may other attorneys would have gladly played these “games” and it would it would have only cost me time and money. Tom refused to do unnecessary work on my case which is a not what may other attorneys would have done. However, all necessary and appropriate work was done professionally, timely and competently. I personally attended almost every court date and witnessed the respect he was given by the judges who served on my case versus the way the judge reacted to my ex’s attorney. My assessment is that the judges knew opposing counsel was playing around and Tom was not. While some attorneys will try and “showboat” before their clients, I never believe such antics played well to a judge. Result: In the end -- as in most cases -- my ex and I settled our case. Neither of us were “jumping over joy” with the results, but that’s what settlements are all about. There is no “winning” a divorce case. Divorce is the dissolution of a partnership and it costs money. Since there were no custody issues in my case, the only issues were financial. I paid more money than I wanted to, but certainly less than my ex wanted. Could I have done better at trial? Possibly, but the stress, time, energy and cost of trial would far have exceeded the benefits of settling. Tom did his job well, efficiently and respectfully. Most importantly he was well prepared and much more so than my ex’s attorney (which was obvious to the judge). While some attorneys are “fumbles and bumblers”, Tom is not. Comparing my situation and result with the “horror” stories I so often hear from others regarding their divorces, I am certain Tom was the right attorney for the job and I would suspect my ex, at some point, realized her attorney did not have the same qualifications.. Finally, I would be remiss not to thank his paralegal, Penelope Parkes, and associate, Jessica Winkler. Penelope was kind and worked hard in organizing voluminous documents I had to produce in discovery. Jessica did much of the drafting and appeared in court along with Tom at most, if not all, court appearances which saved me attorney fees, because I was billed at Jessica’s lower hourly rate rather than Tom’s higher one.
This review is from a person who hired this attorney.
Hired attorney

I did a lot of research on Tom before hiring him. I spoke with my peers, reviewed cases in which he was involved, and scrutinized his credentials carefully. When I hired Tom I made it clear to him that my expectations were high, as achieving my goal of maintaining a decent lifestyle and retiring comfortably rested in large part on Tom's ability to obtain a favorable result. I told him what I considered to be the optimal outcome, while being well aware that it was too much to expect. Tom performed masterfully, negotiating a settlement with terms that were more favorable. He even returned phone calls promptly and provided regular updates along the way. I recommend him without reservation.
This review is from a person who hired this attorney.
Hired attorney

Best Attorney Out There

Tom and his team are the best divorce attorneys out there. I can honestly tell you that there are a lot of attorneys out there that don't have the client's best interest in mind when dealing with such a difficult, life altering experience, but my experience with Tom was first class. After firing my first attorney and wasting a boat load of money doing so, Tom helped me move the needle quickly and was able to take me from start to finish in a very quick time frame. Tom and Jennie make a great team and are two of the very best that Beermann Law has to offer. I highly recommend Tom and his team to anyone out there that is going through a divorce. I will recommend Tom to anyone I know that's going through this process in the future!!!
This review is from a person who hired this attorney.
Hired attorney

Tom and his team are outstanding! Tom helped me with a prenuptial agreement - something I knew very little about. Tom took the time to give me his personal attention by walking me through every step of the process and ensuring I was comfortable with and understood every part the agreement along the way. He is extremely professional, responsive, and of course got me results I was extremely happy with. He also made an obviously uncomfortable situation between my fiance and I a very comfortable sitation. I was very happy to have Tom on my side and would highly recommend him.
This review is from a person who hired this attorney.
Hired attorney

Tom and his associate Jennie were professional, accessible and compassionate. My divorce was somewhat contentious and it was wonderful to have their guidance and support throughout this process. Tom's knowledge of the law and confidence in court made him an outstanding advocate. I would highly recommend Tom and his firm to anyone in need of family law matters.
This review is from a person who hired this attorney.
Hired attorney

My CA divorce attorney consulted Thom on my prenup trial. The prenup was written in IL so we needed to follow IL law on the matter. He was prompt with his replies and was helpful with us getting prepared. He was willing to fly in for expert testimony, which we fortunately ended up not needing since we settled at our pretrial conference.
This review is from a person who hired this attorney.
Hired attorney
See all reviews

One of the best family law attorneys you can find. Knowledgeable and diligent. A true leader in the field.

I highly endorse Mr. Field. Very knowledgeable and caring attorney who gets great results in representing clients! I want all people with legal problems to contact him first.

Tom is a fantastic advocate for his clients and does a tremendous job for them. I strongly endorse this lawyer.

Tom has made a name for himself as a zealous advocate for his clients dealing with all areas of "family law," including divorce and child custody issues. I comfortably refer clients to Tom Field because I know he'll fight hard for his clients and he gets results. He has been recognized by his peers as "40 under 40," or in other words a lawyer under 40 years old to watch. Likewise, he recently received the young alumni award from the Chicago-Kent College of Law in recognition of his legal work. Keep up the good work; I know your clients appreciate it!

Tom is an excellent lawyer who embodies what it takes to be a successful family lawyer. He is smart, aggressive, and compassionate. I have referred many of my clients and friends to Tom and they all have wonderful things to say about him. I highly endorse Tom Field.

Tom is a recognized expert in his field, and I have been very pleased with his work for several clients who I have referred to him. I recommend him very highly. He is an invaluable resource in complex divorce and child custody matters.

I endorse this lawyer's work. I ran into Tom at a social event after not seeing him in many years and we ended up working together for a chartiy fundraiser for our college fraternity. Around the same time, friends of min were having marital trouble and it looked like it was going to be a nasty divorce and the wife was scared and needed guidance from someone who would share with her all of the realities of divorce and protect her rights. I suggested Tom. He was not only her divorce attorney, but the counselor she needed. We forget that sometimes as lawyers that we arent just an advocate for the client but need to counsel them when making hard decisions. Tom counseled my friend through every decision, good or bad, and was her advocate throughout her divorce process. My hat off to Tom Field.