Kristen S. Scheuerman joined the Herrling Clark Law Firm in 2011 as an Associate Attorney, after clerking with the firm for over a year. In 2016, she was named a Partner/Shareholder. Kristen’s practice is primarily devoted to personal injury litigation, although she also handles municipal prosecution for a local municipality.

Originally from Appleton, Wisconsin, Kristen graduated from Appleton East High School and received her Bachelor of Arts from Lawrence University. After working in corporate America for just over five years, Kristen enrolled at Marquette University Law School and earned her Juris Doctorate in 2010.

Kristen's practice also includes some appellate work in a variety of practice areas. In 2014, Kristen was involved in a case that was argued before the Wisconsin Supreme Court to determine the rights of injured parties to access UIM and UM insurance coverages during the "Truth in Auto" era. The high court ultimately held that the insurance companies could not deny access to benefits in these types of cases. The outcome of Belding and its companion-cases remain to this day one of Kristen’s proudest achievements because of the impact those cases had on Wisconsin law and injured parties throughout the State.

Kristen has been recognized and named to the Wisconsin Super Lawyer "Rising Star" list for a number of consecutive years and she was also named to the "Top 40 Under 40" membership by the National Trial Lawyers organization in 2014. She was an Avvo Client’s Choice for Personal Injury that same year. Kristen earned additional accolades in 2015 and 2016 as a "Top 10 Attorney Under 40" for the State of Wisconsin by the National Academy of Personal Injury Attorneys.

An especially meaningful accolade was Kristen’s inclusion in the Wisconsin Law Journal’s “2016 Women in the Law” honorees. 2016 also saw her success in a statewide election to be voted onto the Wisconsin State Bar’s Litigation Section Board and she was recently elected to serve as Treasurer of the section.

Kristen is an extremely active member of the Wisconsin Association for Justice (formerly the Wisconsin Association of Trial Lawyers), where she sits on the Board of Directors and has served as a member of the Executive committee, and also serves as one of the Program Chairs for the organization's Education Program Committee, is a past Chair of the New Lawyer’s Section, and currently serves as Vice-Chair of the Women’s Caucus. Kristen's dedicated involvement with WAJ allows her to maintain a critical working knowledge of legislative changes and proposed legislation that affect her clients' rights. She is also proud to serve as a trustee for the Justice Fund, allowing her to add her voice to the political climate and work towards electing officials who share her commitment to the civil justice system and the best interests of her clients and injured people throughout Wisconsin. 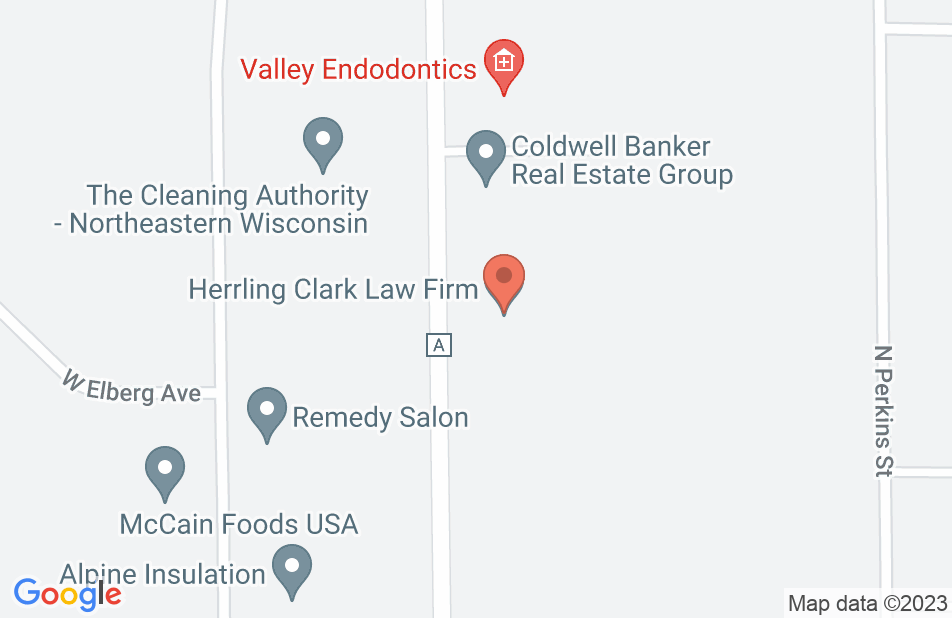 I had a car accident insurance claim that Kristen help me with. I was completely lost when I reached out to her. She made the process so easy for me and explained everything in excellent detail to understand. From meeting to continuing medical care to completing medical care and gathering records and data and finishing with our claim at a very reasonable price. Kristen and her team were absolutely amazing.
This review is from a person who hired this attorney.
Hired attorney

After my accident and surgery my husband and I looked for a local law firm to ask questions about liability, reimbursement for medical bills and compensation. Kristen Sheuerman from Herrling Clark answered our questions; so we hired them. Kristen and her staff are a group of dedicated, knowledgeable individuals who worked with us to settle our case. We were very pleased to have worked with them.
This review is from a person who hired this attorney.
Hired attorney

She made a difficult time a little easier. I wish I could give more than 5 starts.

Kristen and her assistants were wonderful. I felt so "taken care of" during the entire process. They were very responsive, thorough, and compassionate. Yet, Kristen was good about managing expectations and what this process could and could likely not accomplish. I felt "heard" and felt like the process of laying out what happened helped me regain some sense of confidence in a situation where I felt very powerless. I appreciated her explanations of our options and her quick work of everything on her end. In fact, I was surprised by how quickly things went once we chose a direction. It made a difficult time a little easier to manage. I have only good things to say about the entire office. They were friendly, professional, and so incredibly easy to work with.
This review is from a person who hired this attorney.
Hired attorney

Kristen was amazing from start to finish! Exceeded my expectations by a long long shot. Thanks Kristen!!
This review is from a person who hired this attorney.
Hired attorney

Went to bat for us!

In the beginning, Kristen layer out everything we could expect with our case. She was patient with us as time went on, reminding us of the legal hoops we needed to go through. In the end, she really went to bat for us and, I believe, secured the best outcome we could have hoped for. She is smart, tenacious, and knowledgeable. I highly recommend her legal services.
This review is from a person who hired this attorney.
Hired attorney

Kristen's professionalism in handling our case was evident .She is an expert dealing with the complexity's of Medicare .She also is personable and truly involved and always answered any concerns we had.
This review is from a person who hired this attorney.
Hired attorney

One of the Best!

The experience I had with Kristen is invaluable. She is open, honest, and extremely intelligent. Kristen always kept me in the loop of any transaction happening-very informative. She is a very insightful, and always put me at the forefront in any decision to be made. I truly cannot say enough about my positive experience. I would most certainly retain her again - with the hopes that I never have to. I consider her a friend and look forward to running into her outside of her office. Absolutely a positive experience all the way around.
This review is from a person who hired this attorney.
Hired attorney

Kristen did an awesome job. She always made me feel comfortable and that she was my advocate. She was very friendly and professional. She explained each step in the process and was very good at keeping me updated. Going to her was an enjoyable experience.
This review is from a person who hired this attorney.
Hired attorney

She was excellent, she was very specific, and kept me informed about everything, I'm just happy she was able to represent me, I would strongly recommend her! Thank you Kristen!!!
This review is from a person who hired this attorney.
Hired attorney

Kristen is a listener which is so important. She was compassionate and got every detail of my fall and subsequent injury. She is personable and gave me positive support during my recovery. I trusted her to have my best interests as prime which she did by giving me information about my claim and let me decide which direction to pursue. The best part of my experience was not the generous settlement but the gain of a true friend.
This review is from a person who hired this attorney.
Hired attorney
See all reviews

Kristen is an excellent attorney and is always willing to go above and beyond to ensure her clients get the best result. Additionally, Kristen is a leader in the legal community and is a wealth of information about changes and updates in the law. I always know that I can go to her with questions I have and she will have a good answer.

Smart, tireless and effective are how I would describe this attorney. I've had the pleasure of working with her on joint projects and I am impressed with her knowledge and dedication.

I endorse this lawyer. Kristen is smart, detail oriented and a hard working advocate for her clients. I've found her to be a worthy adversary in that she is true to her word, extends the customary professional courtesies and chooses her battles wisely. I would recommend Kristen for any injury, business or family law related litigation matter.

I endorse this lawyer. A rising star who tackles all kinds of difficult cases and prevails. Cares for her clients and obtains favorable results

I endorse this lawyer. Kristen is sharp, hard working and quick on her feet. She takes very good care of her clients.

I endorse this lawyer. Kristen is a very dedicated and hardworking attorney. She strives hard for favorable results for her clients. I would recommend Kristen to my family and friends.

Kristen is a great lawyer and a great person. I'd recommend her to anybody in need of legal assistance.