Attorney Rex C. Anderson has been representing personal injury victims, car accident victims and dog attack victims in Genesee and Lapeer counties since 1991. He has obtained millions of dollars in verdicts, judgements and settlements on behalf of his clients.

He also specializes in suing debt collectors / debt buyers / banks / mortgage companies under the TCPA for robocalls and the FDCPA for harassment and deceptive practices. He also sues credit reporting agencies under FCRA as well as representing consumer debtors in bankruptcy court since 1991. Rex Anderson defends consumers being sued by Debt Buyers in Michigan state courts for old credit card debt, medical debt and mortgage debt. 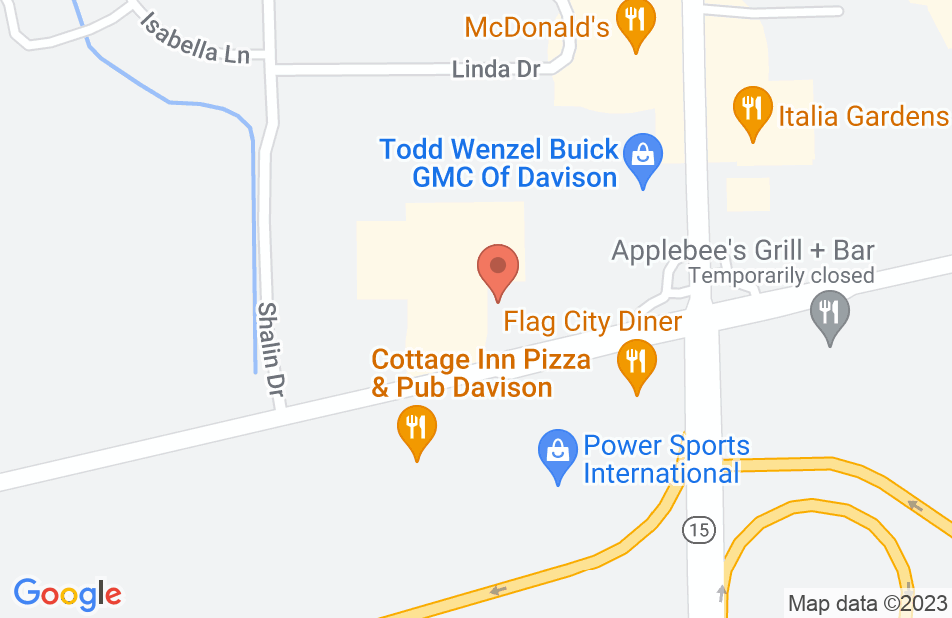 Rex got it done. Very personal service. He answers his own phone. Kept me informed and helped keep my anxiety down. He's my attorney from here on. I highly recommend!
This review is from a person who hired this attorney.
Hired attorney

Rex Anderson has been my attorney for over 10 years and he is the Best! He got me a huge settlement on a car crash case where the insurance company was really fighting me. Since then I’ve gone to him on all my other legal matters. He has an excellent reputation with all the judges and other lawyers and he knows how to talk to a jury. Rex is a very skillful trial lawyer. The few times he couldn’t help me, he found me the right lawyer who could. That’s why I keep going back to him when I need legal help.
This review is from a person who hired this attorney.
Hired attorney

Rex and his team did an outstanding job of fact finding and info gathering to be presented at trial.Very dedicated & determined to help us! ,we would highly recommend his services!
This review is from a person who hired this attorney.
Hired attorney

In 2016 I hired Rex Anderson to defend me against a debt collection lawsuit. National Collegiate Student Loan Trust (NCSLT or NCT) sued me for $21,000.00. Many years ago I stupidly co-signed a student loan for a relative who left me holding the bag. Attorney Rex Anderson explained that NCT was a debt buyer who in many cases did not keep good records and often could not prove that they owned the debt or had legal standing to sue. He was right. He defended me very well. We ended up settling a $21,000.00 student loan debt which was non dis chargeable in bankruptcy. This debt was incurring double digit interest and Rex Anderson was able to settle this $21,000.00 debt for less than $6,000.00! Thanks to Attorney Rex Anderson I can sleep again at night.
This review is from a person who hired this attorney.
Hired attorney

Rex is the best in his field. Did a great job at getting me a great settlement!!
This review is from a person who hired this attorney.
Hired attorney

I hired Rex for a legal matter with a creditor. He was very thorough explaining everything. His office staff was beefy helpful and professional. I would definitely hire Rex again if I need to!
This review is from a person who hired this attorney.
Hired attorney

I really don't know where to start. I had fought to keep the house/home I was living in for 28 years. My sons had grown up there. As hard as I tried, the house was falling down around me. I became depressed and hopeless. I didnt know where to turn for help. Down and out, I knew that I had to get help and I really had to get out of that house. It was killing me mentally and physically. I first turned to my credit union, there were rude and non supportive, I had been willing to work with them. I called rex's office and set up an appointment.This was the best thing I have ever done. Every one in his office was wonderful. They treated me with respect, non judgemental. So very supportive. I could breathe again. It was a very long road, but they walked me through the process. They remained in contact with me. They became my family,my support system. Every step of the way! I was so stressed,so depressed and so afraid, they never let me down, not once. Attorney Angelo was awesome! He is is a wealth of knowledge as is Rex. They make an awesome team. The girls Jen and Beth were absolutley outstanding,pleasant and helpful in everyway. Even though this was one of the hardest things I've had to go through, they never let me fall. They saved my life, they saved me. Never once did they make me feel like I was asking foolish or silly questions, oh yes I know I did. They explained everything to me in detail in terms I understood. They also kept me on the straight and narrow, so many times I just wanted to give up. In those times they kept closer contact. Not because they just wanted my business but as my support team! I believe that they are the very BEST!! I would never go to another attorney for anything. They worked hard for me. i even feel as though they went over and above. I have learned so much from them and I have no regrets or shame for filing bankruptcy. The weight of the world was lifted from my shoulders. I have spoken to friends about my bankruptcy, some of them had also gone through this process. After talking with them they were amazed at the support and compassion of my Lawyers and staff! If I called and left a message they were quick to get back with me. This wasnt true for the others I spoke with. I could go on and on on. I am so grateful. Life is good. I owe this to the office of Rex Anderstand! If your looking for a lawyer that is knowledgeable, works hard for you beginning to end. Choose the law office of rex Anderson, you won't regret your decision. They are the best! And after everything was complete i recieved a follow up call from Rex. He was making sure that everything was good with me. Wow! someone actually taking the time out of their busy day to call asnd say Thank You ( to me?) Yes to me, and too make sure i was doing well. One of the worst times in my life has left a postive stamp on my heart and soul. Thank You Att. Angelo. Att. Anderson, Beth and Jen., ,Everyone of you have helped me, sttod by me, let me cry and even laugh. Everyone of you stood by me when I needed you the most! God Bless You! Again This law team is the very BEST! trust me... you won't have to look any farther that going to the law office Of Rex Anderson!

I endorse this lawyer. I am impressed with the care and diligence he gives to all his clients. Rex is the attorney I turn to for any civil matter, particularly personal injury litigation.

I met Rex after researching a consumer protection matter where he was the lead counsel. Needless to say, Rex achieved extraordinary results and I reached out to learn more about that case and his consumer law experience. After working on a few matters together, I can say Rex is without question one of the most compassionate, knowledgeable attorneys out there. He is a tireless advocate, and highly regarded in the legal community for his diligence, knowledge, professionalism, and the results he achieves.

Rex has fought against some of the best defense attorneys in the country and has come out on top! His knowledge of consumer law, his passion to fight for the good guy, and his ability to get the job done are nothing short of impressive. I highly recommend Rex for any legal matter. He's a great guy and he will fight for you!

What can I say? Rex is the best in Flint! He is thoughtful, kind, and compassionate. He cares about his clients and about doing what's right. Rex gets up every morning and asks himself how he can make the world a better place for consumers. The answer is Rex. Great lawyer and a great friend!

Rex Anderson is a skillful, hard-working lawyer, who will get the very best results for his debtor clients. He is active in the legal community promoting education and awareness. I endorse this lawyer.

Rex Anderson has worked hard for 2 decades to understand the bankruptcy court system. He is a strong advocate for the consumer. I recommend him.