Gerald H. Acker is the founder and managing partner of the Michigan personal injury law firm of Goodman Acker P.C.   Since the founding of the firm in 1993, Gerald has been instrumental in its development, growth and continued success, including numerous million-dollar outcomes for his clients.

A Michigan native, Gerald received his undergraduate degree from the University of Michigan in 1977 and then got his J.D. from Wayne State University Law School in 1981. Gerald exemplifies his firm's core values of hard work, honesty, and servicing the client above all else and always leads by example resulting in the profound respect of the legal community, staff and clientele alike.

Named Michigan SuperLawyer by SuperLawyer Magazine for multiple continuous years, named Leaders in the Law 2014 by Michigan Lawyers Weekly, past President of Michigan Association for Justice are just a few of the many awards and accomplishments Gerald has received.

He has also long been active in the political arena, working on behalf of candidates who support continued access to justice for individuals. Gerald has served on the national finance committee for President Obama in 2008 and 2012, for Presidential candidate John Kerry in 2004, and as vice chair of the finance committee for the election campaigns of U.S. Senator Debbie Stabenow in 2000 and 2006, as chair and co-chair.

When Gerald is not practicing law or being active in the political arena, you will find Gerald playing basketball, rooting on the U of M basketball team, and running.

However, the biggest enjoyment for Gerald is practicing as an attorney and the satisfaction he derives from working with his clients. "It's gratifying to me when I can spend the time that's needed with each family and make sure they get what they need to start rebuilding their lives," says Gerald. 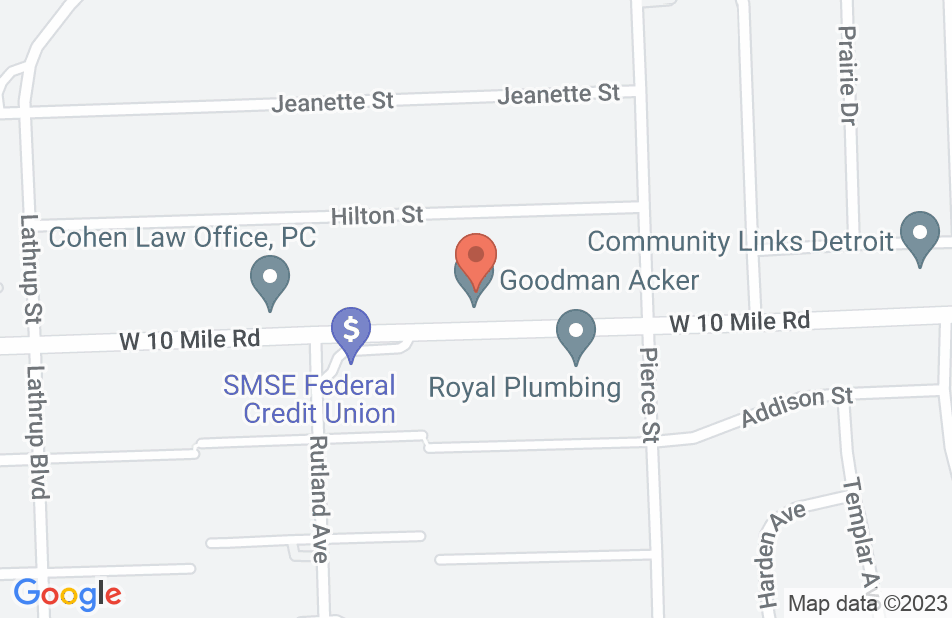 I was involved in an auto accident and was severely injured making it impossible for me to return to my line of work. Mr. Acker and his staff were very friendly and informative and have helped me every step of the way regarding my claims. They are very client oriented and are always sure to let you know what to expect so that you aren’t always wondering “what’s next”. When I first met with Mr. Acker and his support staff, I was given a list of their client guarantees and I have to say, they lived up to those guarantees in every way and continue to exceed my expectations. I am very pleased with the legal representation that I am receiving and would highly recommend this firm. I have received settlement on one of my claims and I am very happy, as they received the maximum amount available!

I have been partners with Gerald for over 20 years. Gerald is an extremely talented and well respected attorney in the legal community. He truly has been instrumental in Goodman Acker's development, growth and continued success. He exemplifies the Firm's core values of hard work, honesty and servicing the client above all else.