Talk to me before you talk to the insurance company.

Joe represents injury victims against the unfair tactics of big insurance companies and corporations. He graduated from the University of Dayton School of Law in 2002 and started his career at the personal injury law firm of Thorson & Switala LLP.  In 2008, he became a partner of the newly named firm, Thorson Switala Mondock & Snead, LLP. He and his partners set forth a vision to create a small, focused firm that specializes in injury law.  A majority of his clients are referred by fellow attorneys, former clients, and doctors. Joe has been recoginzed by his peers for his skill in and out of the courtroom, including being selected as a Rising Star by Super Lawyers Magazine. Many people are hesitant to contact an attorney, but those that do are usually set at ease knowing they have someone on thier side.  Give Joe a call.  He can probably help.  If Ihe can't, he'll get you to someone that can.  Free consultations. No obligation.  No pressure. 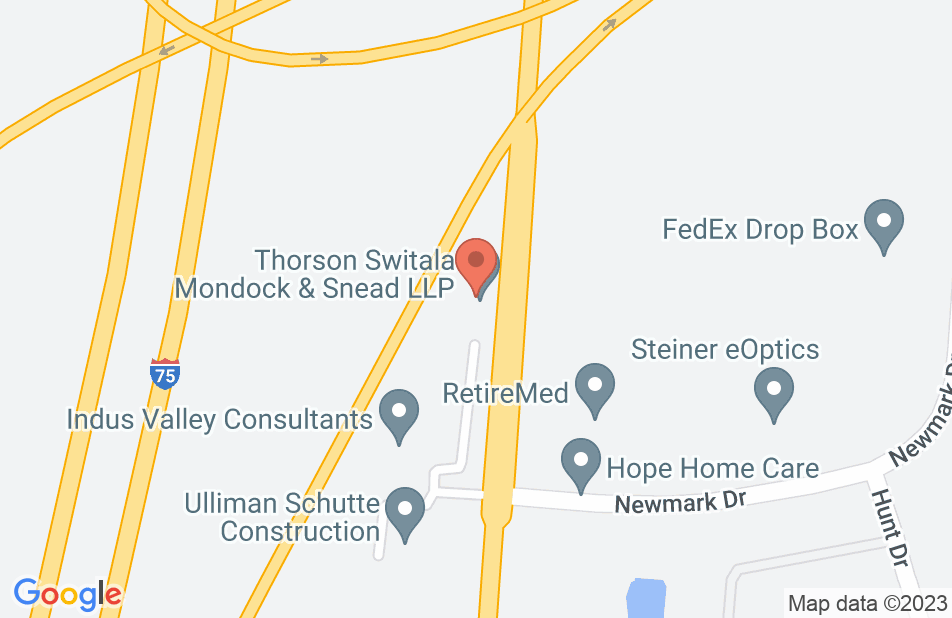 The law firm of Thorson Switala Mondock & Snead LLP is the best - Joe Mondock in particular. He took my son’s case after three other law firms declined – and two of the three chased us down, initially. The end result was that Joe Mondock got my son a decent settlement. The other law firms were too busy, or not interested, saying the injuries weren’t bad enough, the medical bills weren’t high enough ($7300), etc., even though the case had several rock solid aspects to it. My son and his girlfriend borrowed my car and stopped at a red light. A drunk driver slammed into the rear of my car and fled the scene. The drunk sped away with his airbag deployed, his trunk bent up and front end smashed. My son called the cops, and he and his girlfriend (she was driving) chased after the drunk in my damaged car ($6000 damage, in the shop for 100 days) and the drunk driver was apprehended after 7 miles of twists and turns. The drunk driver failed the sobriety test and was taken to jail. It was his 3rd DUI. None of this mattered to the other law firms. For them, it was all about the money, and they said there wasn’t enough money at issue. They told my son to settle it on his own. Of course, the drunk driver’s insurance company offered up “peanuts” when my son tried to settle with them. It was ridiculous. After we pondered the situation for a few months, luckily we saw the Thorson Switala Mondock & Snead television ad where they talk about “Walk-In Wednesday”. So, we met with Joe Mondock without an appointment the next Wednesday, and we discussed the potential case, at length. He said my son deserved more than the crap the drunk’s insurance company was offering. In fact, Mondock wrote up the complaint with an additional angle reflecting the drunk fleeing the scene - extra ammunition. To tell you the truth, at deposition, I don’t think the drunk driver’s attorney quite understood this additional aspect, nor their predicament. Mondock made the case about more than just the money. The defendant’s team understood eventually, when the case was settled for an amount double digits times what they initially offered my son. Bottom line, I give the law firm of Thorson Switala Mondock & Sneed a solid “A”, especially Joe Mondock. He wasn’t afraid to step up to the plate and take a swing, and fight the good fight.
This review is from a person who hired this attorney.
Hired attorney

Joe Mondock is an excellent attorney. Joe represented me in 2 seperate cases and I have recommended him to several friends as well. I have no problem recommending him to people because I know that he will be honest and helpful. If he can't help you he will give you good sound advice or refer you to someone that can help you. He always kept me informed on how my cases were proceeding and settled them in a timely manner. He was very proactive with my cases and the settlements I received were above and beyond what I expected. So if you are looking for a good personal injury attorney I would highly reccomend contacting Joe.

I thought Joe did a wonderful job for my daughter's case. She was attacked by a dog and was bit two times on her face. Joe was very helpful and helped me every step of the way. I valued his opinion as I had to make the decisions for my daughter and I felt helpless but Joe was there every step of the way. He was very knowledgeable and always answered my questions quickly.

My family has obtained Joseph Mondock for legal services on 3 different occasions, different family members each time. Our choice of him originally started when I was in an auto accident and we contacted his offices for legal services. Mr. Mondock came to our home to get my information as I was in pain due to my injuries. He was very professional and caring and took the time to make sure that I understood everything and answered all questions. Throughout my case he was quick to respond to my calls and questions as well as giving updates so that I always knew what was going on. He worked hard to get me the best settlement possible and make sure all of my bills due to my accident were taken care of. There was little to no work needed on my part as Mr. Mondock handled everything with the insurance and medical bills which removed all the stress of the situation from me and made it possible to just heal and deal with my injuries. My husband ended up in an accident a few years later which was more extensive and time consuming than mine. When we determined that we would need a lawyer, we did not hesitate in contacting Mr. Mondock for his services. He once again provided the same excellent service to the point that he makes you feel as if you are the most important case he has. My husbands recovery and medical care was much longer than mine and Mr. Mondock still took care of all details for this extended time and got us a generous and much appreciated settlement. Recently my son was in an accident due to an uninsured motorist and we immediately contacted Mr. Mondock to get his help in how to handle such a situation. He gave us the straight truth about how to deal with it and did not try to promise that he could do something that might not be possible just to get business. Mr. Mondock once again handled all of the details and worked with our medical insurance as well as our auto insurance for the uninsured motorist claim in order to get the claim handled the best possible way. He was even able to get the medical insurance to accept a lower amount for their reimbursement in order to provide my son with a larger settlement amount. Every time that we have obtained Mr. Mondock he has provided excellent service and has never let us down. We have been completely satisfied with his efforts and would highly recommend his services to anyone. We greatly appreciated all of his hard work and the stress that he removed from us by him handling all aspects and details of our claims.

I endorse attorney Joe Mondock. Mr. Mondock is a seasoned and skillful lawyer with over 12 years of legal experience as a lawyer. We went to law school together. Mr. Mondock is professional and ethical in all his work. I highly recommend Mr. Mondock.

I have worked with and against Mr. Mondock on several cases. He is an excellent personal injury attorney. I would not hesitate to refer a client to Mr. Mondock.