As a Fellow in the American Academy of Matrimonial Lawyers (AAML) and one of Super Lawyer’s Top Women Lawyers– honors not easily earned –Amy Weis is a highly respected Columbus divorce lawyer. She’s earned her reputation by sparing her clients the financial and emotional drain of contested family law litigation through amicable settlements whenever possible. If a case cannot be resolved through a settlement, Amy is known as a fierce litigator in the courtroom.

Her greatest professional satisfaction is knowing that she leaves her clients better than when she found them, often by empowering them with the knowledge of what to expect, what their entitlements are and by counseling them through the course of their domestic dispute – from start to conclusion. In addition to her expertise in family law and family divorce law, Amy has expanded her knowledge through the AAML to include high profile client contested divorce cases, valuing interests in private equity investments, intricacies of executive compensation and even pet custody.

Recognized by Ohio Super Lawyers® from 2009 thru 2013, Amy has been named one of the Top 25 Columbus Women Lawyers from 2010 to 2013, and from named one of the Top 50 Women Lawyers in Ohio from 2011 to 2013. She has also written on the law and lectured on its practice. In 1997, she co-authored “Using Discovery to Your Client’s Advantage,” which the Ohio CLE Institute selected for publication in its “The Best of Family Law 1997″ publication.

Amy enjoys spending time with her husband, hiking with their dogs, traveling and golfing – although she’s been told her golf skills pale in comparison to her legal skills. 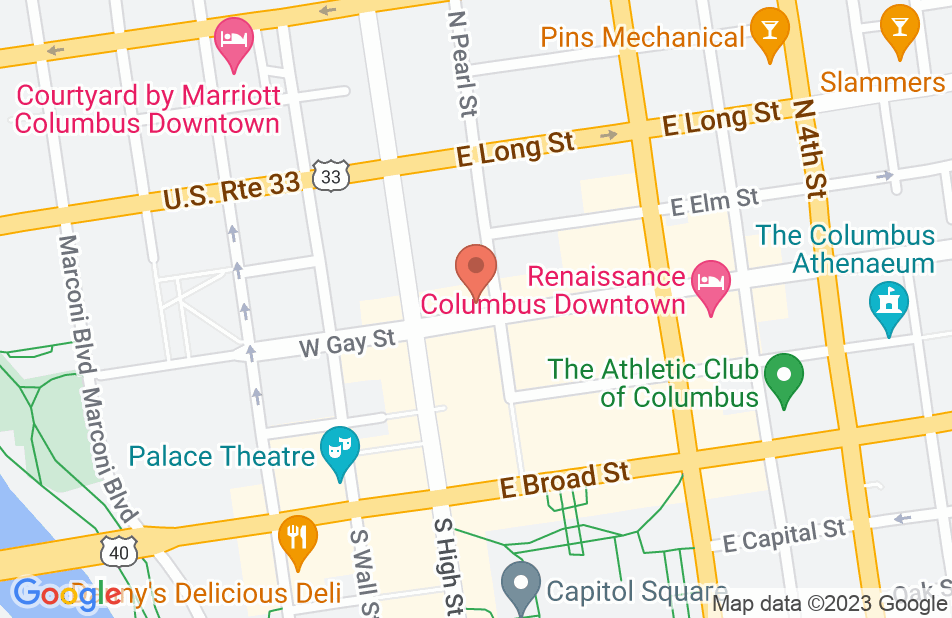 Amy and her staff did an outstanding job helping me navigate the divorce process. She understood what my priorities were and fought to ensure those priorities were met. Based on her experience she was able to point out the pros and cons of different issues I would raise. In addition, I was very comfortable reaching out to Jamie as needed. If you are looking for an attorney to handle your divorce, I highly recommend Amy.
This review is from a person who hired this attorney.
Hired attorney

Amy did a great job. She represented my interests and point of view extremely well. I will forever be indebted to her!
This review is from a person who hired this attorney.
Hired attorney

Amy and her staff are clearly educated in every aspect of divorce. She was thinking ahead and always proactive which is vital in a long dispute. Her team was very organized/compassionate and kept all of my life history in order. She made suggestions when necessary for expert outside help such as forensic accounting. Most solid decision I made was to take Amy and her team on this battle.
This review is from a person who hired this attorney.
Hired attorney

I interviewed several attorneys, all men, except Amy. I hired her because I felt she was going to fight for me and be my strongest advocate. I had a very long and protracted divorce and throughout it all Amy was thoughtful, caring and was there when I needed her. She listened and never made me feel worse about my situation and was proactive in helping me walk through this process as hard as it was. She gave me great strategies and she never pushed me in a direction I was unsure of or not comfortable with. She consistently advised me to the best of her abilities and allowed me to choose my best options. In the end, I was very happy with the outcome and I have actively started to rebuild my life. I appreciate her effort and great work and I am happy with the job she did.
This review is from a person who hired this attorney.
Hired attorney

Amy Weis helped me to navigate a very traumatic time. She helped me to focus on important matters. She is smart, compassionate, and is a master of her craft. I highly recommend her.
This review is from a person who hired this attorney.
Hired attorney

Was the aggressive lawyer that we needed.

We hired Amy 17 yrs ago for a custody case that was held in Knox County. She was compassionate about our daughter but was a bull dog when it came to dealing with the opposition. She acquired custody for us & was great to work with. I highly recommend Amy!
This review is from a person who hired this attorney.
Hired attorney

Someone on My Side

I live in another state and needed help with my divorce in Columbus. After reading reviews on a few sites, I chose Amy--not the most ideal procedure, but I sure lucked out. Not only Amy but her office support (special thanks to Jaime) were responsive, thoughtful, helpful. I felt I got excellent advice, and everything went smoothly. And the charges were clear and more than fair. I'd recommend Weis& O'Connor to anyone.
This review is from a person who hired this attorney.
Hired attorney

Amy Weis did a terrific job supporting and educating me on the difficult process of divorce. She helped me reach a favorable settlement. I recommend her without reservation.

William Geary, Divorce and separation Attorney on May 22, 2015
Relationship: Worked together on matter

I endorse this lawyer. I have worked with and against Amy, over the years, and I have found her to be well informed, tough, and an excellent litigator.

I endorse this lawyer. Amy Weis is one of the finest domestic relations lawyers in the state of Ohio. She is highly knowledgeable, always professional, and a credit to the profession.