Experienced, Personalized & Caring Representation To Help You Through Bankruptcy

A dynamic business entrepreneur himself, Steven has extensive experience with both start-up companies and well-established firms in the technology and entertainment industries. Formerly with Sony Music, Steven founded MegaDVD.com, an online DVD retailer. Having built this successful enterprise, he sold MegaDVD to the eUniverse Network known as Intermix Media, the company that created the popular internet websiteMySpace, a subsidiary of News Corporation. As Director of Business Development for eUniverse, Steven helped pioneer many other successful direct marketing techniques for the company generating millions of dollars in revenues and thousands of satisfied customers. Prior to attending law school, Steven worked for Hollywood agent and former president of the Walt Disney Company, Michael S. Ovitz at his Artists Management Group in Beverly Hills, CA.

Steven received his undergraduate degree in business administration from the University of Florida Warrington College of Business. Transitioning from the boardroom to the courtroom, Steven received his J.D. from the University of Florida Levin College of Law. Steven served as a legal clerk for the Honorable Judge William T. McIver and for the Staff Attorney's Office of the Twentieth Judicial Circuit of Florida. Steven is a member of the Phi Delta Phi legal honor fraternity.

His passion for community service began at an early age as he spent several summers as a medical missionary in remote areas of China, Honduras, Kenya and Mexico. Steven is also an Eagle Scout and has strong ties to the Southwest Florida area where his family founded and operates the Cape Coral Eye Center. Steven currently serves on the alumni advisory board of his high school alma mater, the Canterbury School in Fort Myers. 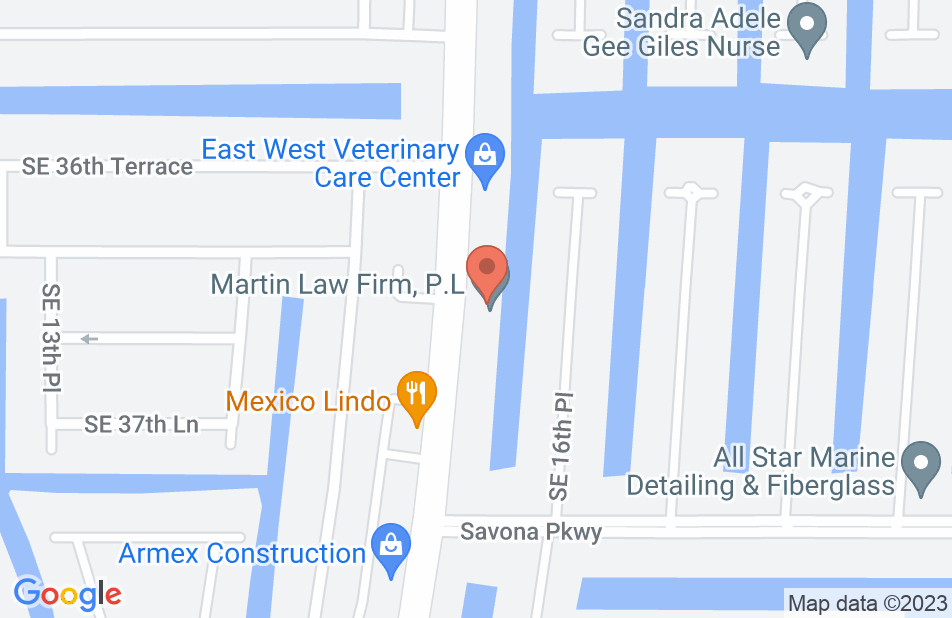 Highly recommended!! My very first call to them was answered by Mr. Steve Martin. He was so calming, knowledgeable, and nice. I received an appointment that day and was helped by legal assistant, Miss Claudia, who was just as warm and professional. My nerves were put at ease, my case was expedited and I felt like part of their family. I honestly can’t say enough of wonderful things about Martin Law Firm, and how truly grateful I am to have had them on my side.
This review is from a person who hired this attorney.
Hired attorney

I was in a car accident earlier this year and it was a difficult time for me and my family. Steven was there to help me every step of the way. He was very professional and always updated me throughout the case. In addition, his staff was always very professional and friendly. I would highly recommend Steven Martin!
This review is from a person who hired this attorney.
Hired attorney

Since the beginning the staff at Martin Law Firm was super friendly and very proactive! They handled my case in a very professional manner and made sure that I was up to date with the development of the case. I would recommend Martin Law Firm 100%. Very professional!
This review is from a person who hired this attorney.
Hired attorney

Steven and Nicole were amazing lawyers for myself! I was young and confused and mainly hurt badly from a horrible car accident i was in. I started getting bills and found out i had a lean, My step mother recommended them to me. They were polite and so understanding. Helped me understand everything legal wise! They made me feel important, and they were so compassionate. All i got to say is they are truely amazing people! I highly recommend them to anyone having legal issues! you will not regret it!!

I especially want to thank Steve Martin for making me laugh at a time I thought I would ever laugh again. Now Nicole these are not enough words of praise for that lady. She went above and beyond what I expected. You also restored my faith in lawyers. I have always felt a lawyer could put Jesus on the stand and make him look like a liar. I love and thank you all.

Steven Martin is an exceptional attorney. He is a true professional who is always dedicated to the needs and wishes of his clients.

Mr. Martin personally oversees all aspects of Martin Law Firm. He assures that each client is treated with professionalism, respect, and dignity. He strives to give the highest level of legal representation possible in every case. Mr. Martin zealously advocates for his client's rights which allows him to resolve most cases without the need for prolonged litigation.

I endorse this lawyer. Steven is extremely knowledgeable about issues in trust preparation, administration and litigation. He also provides excellent representation in matters involving wills, probate, business matters, divorce, custody and bankruptcy. What sets Steven apart, however, is his obsession with outstanding client service, and he holds the attorneys and staff at Martin Law Firm, P.L. to that same standard.

I endorse this lawyer. Steven is a well-rounded attorney and well versed on various areas of the law. Whatever your legal problem may be, Steven will likely have a workable solution for you. I highly recommend him for your legal needs.

I endorse this lawyer. Steven is a smart, aggressive and a hardworking individual. He is passionate about his clients and his work. He strives to provide the best results and the best customer service to his clients.