Adam Cathey is a Georgia native. H After graduating high school, he enlisted in the U.S. Navy, where he served on board the USS John F. Kennedy from 1993 to 1997. After completing his military service, Adam attended the University of Georgia. After obtaining a Bachelor of Arts in Philosophy, Adam attended the Louisiana State University Paul M. Hebert School of Law. While earning his law degree, Adam worked as an intern with the United States Attorney's Office for the Middle District of Louisiana and as a law clerk for the Baton Rouge law firm of Guglielmo, Marks, Schutte, Terhoeve, and Love.

After Hurricanes Katrina and Rita battered south Louisiana during his final year of law school, Adam moved back home to Georgia. He accepted a position as an Assistant District Attorney for the Lookout Mountain Judicial Circuit, working under the Honorable Herbert E. "Buzz" Franklin. After several years as a prosecutor, Adam made the decision to go into private practice, enabling him to use his legal training and real-world experience to help real people solve real problems.

Since relocating to Ringgold, Adam has become deeply involved in the local community. He is on the Board of Director’s for the Share America Foundation, a non-profit organization that awards college scholarships to promising young musician’s devoted to maintaining the musical traditions of rural Appalachia. In his professional capacity, he serves his community as a Guardian ad Litem in the Juvenile Court of Catoosa County, Georgia, advocating on behalf of children forced to go through the DFCS/foster care system. Additionally, he routinely accepts appointed cases in the Juvenile Courts of Catoosa and Walker Counties. 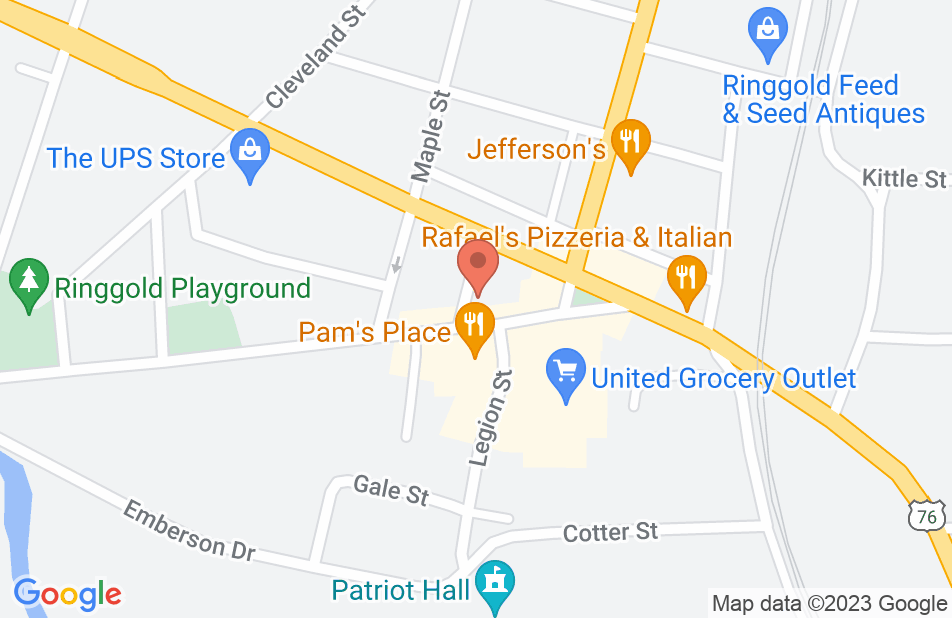 Mr. Cathey, was right there for me all the way. His prompt and personal advice and guidance, was just what I needed. The issue was settled quickly and effectively. Thank You again for all that you do.
This review is from a potential client who consulted with this attorney.
Consulted attorney

Although our case is not yet to an end, Mr. Cathey and his staff have been extremely polite. He took immediate action on proving the allegations my ex was making were false an he has been very prompt and honest with me. He has put my family and myself first , and contact with his staff is absolutely amazing. He is by far the best attorney in Catoosa county that I have came across and I am forever thankful that I was able to hire him. Amanda does exceptional work and a superb job when it comes to communicating with clients and response rates. No matter the outcome , I know for a fact that this law firm is working their best and giving it their all!!! 20/20 by far ! Thank you for your constant hard work , and most of all thank you so much for being respectful and responding to me no matter how many emails I send you a day. You guys are awesome !!!!!
This review is from a person who hired this attorney.
Hired attorney

I have been very pleased with Mr Kathy's law expertise and service. His staff is extremely friendly and extremely willing to help me with any questions or concerns that I have had. I would happily recommend this Law Firm!
This review is from a person who hired this attorney.
Hired attorney

Adam represented us in relation to the county family services. His knowledge and skill in guiding us through a difficult maze of the legal system cannot be overestimated. I would give him my highest possible recommendation. I would not want to be represented by anyone else!
This review is from a person who hired this attorney.
Hired attorney

In 2013 and 2014 My Dad and Mom went on Hospice. In order to better be able to take care of our Dad's Business and Estate, we went to Adam, who helped us with Power of Attorney Documents. A year or so before that, Dad, who was beginning to show signs of Dementia and was trying to sell a valuable old car. Adam was kind enough to come out and help me, my brother and Dad with the Paper work. Dad had plenty of old Tractors, farm equipment. Adam and Dad worked out a deal for some old farm equipment. Thanks Adam for being there during a tough time in our lives and helping. There are some good old country lawyers left in this state.
This review is from a person who hired this attorney.
Hired attorney

For fathers needing assistance with custody...

My ex challenged me fir chins custody & was awarded temporary full custody with supervised visitation. Adam helped gather the evidence that the claims against me were false & awarded back all of my previous joint custody. His staff answers emails promptly (usually same day) & he is very helpful with any & all questions you may have. If you're in Catoosa County, GA and need representation to get custody of your child & are a good parent, he's the man to go to. Thank you Adam Cathey!
This review is from a person who hired this attorney.
Hired attorney

I came from out of town on the day after Christmas and met with his receptionist, as he was off on vacation. Although her voice was cracking significantly, it also had a reassuring impact :) She stated she would contact him with the details of my Son's case. That evening, I got a call from his office that he could see me the next morning . . . while on vacation. Mr. Cathey was very patient in detailing the weight of the charges and what to expect going forward. He was also very straight forward and helpful in explaining the wide range of possibilities in reference to the DA's and court; all variables that could play for or against my Son by chance. Although I did not hire Mr. Cathey, I certainly would in the future. I sensed a military tone to his voice and was glad to hear he is a veteran. Of the four consultations I had on this day, his was the most straight forward, empathetic and complete.
This review is from a potential client who consulted with this attorney.
Consulted attorney

I hired Mr. Cathey for a child custody matter and couldn't have asked for a better advocate for me and my family. In addition to working hard for my case, he was honest and realistic about the expectations and probable outcome keeping me informed about the process along the way. His prices were fair and discussed beforehand with no outrageous fees tacked on at the end, as has been my experience with prior attorneys. I couldn't recommend a better attorney for anyone I know.
This review is from a person who hired this attorney.
Hired attorney

Mr. Cathey and his staff were very kind and helpful when I was going through one of the hardest times of my life. Mr. Cathey and his staff were available when I had questions, patient when I did not understand the court system, and were able to give me clear guidance without being pushy or rude. They are very considerate and helped me anyway they could.
This review is from a person who hired this attorney.
Hired attorney

Hired two years ago for custody case that is still not finalized. I have emailed numerous times asking for updates or any ideas on what is going on, with no response. This may be on behalf of whoever responds to emails, but the communication never occcurs.
This review is from a person who hired this attorney.
Hired attorney
See all reviews

Mr. Cathey is an outstanding attorney who provides exemplary advice on Avvo. I would recommend everyone and anyone to him for representation. Even though I have been practicing fo 24 years, as a judge, magistrate, prosecutors, and in private practice, I learn valuable new information from him every day. A superb attorney.

Mr. Cathey is a skilled and experienced trial attorney that has substantial experience handling complex criminal cases. He is an effective negotiator and is very through. I give him my highest recommendation.