Clifford's clients run the gamut from individual entrepreneurs to medium-sized entities with 100+ employees. His clients include many small businesses in the local Reston/Fairfax County/Northern Virginia area as well as businesses large and small all across the country and overseas. 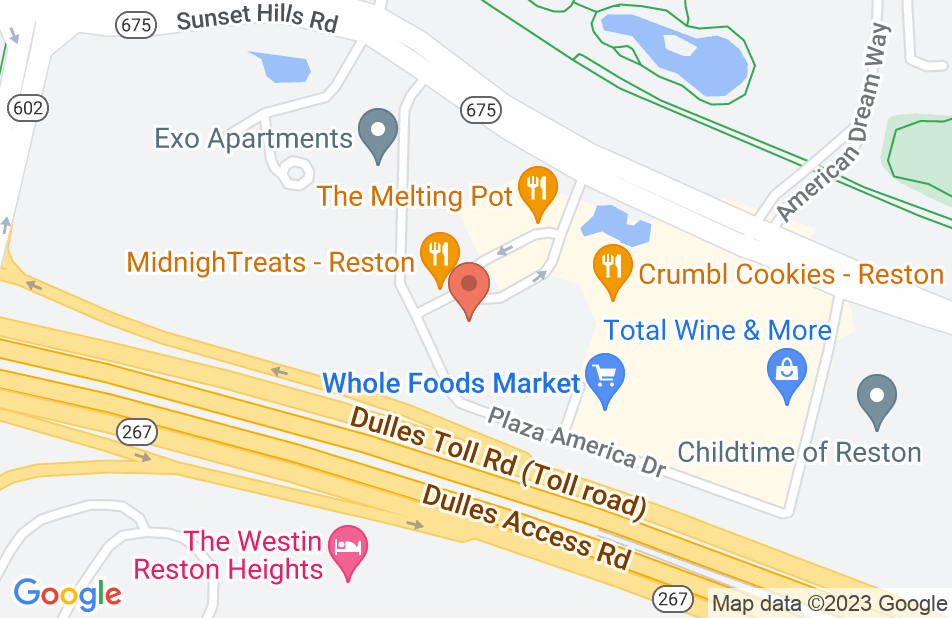 Cliff Hyra is exactly what we needed in a patent attorney. As a small business, creating our first patent, we wanted an attorney we could work closely with, feel confident in and to know the costs involved. Cliff is truly a professional and understands the special needs of working with an inventor. We were very impressed with his technical ability, demonstrated by his suggestions and understanding of our invention. He always provided clear, knowledgeable and timely responses to our relentless questions, which is exactly what you need when preparing a patent. Cliff has fixed pricing for most services allowing us to know what to budget for cost, without the fear of enormous cost overruns. With his pricing, it has made getting a patent within reach for any inventor. In retrospect, I can't imagine having done it differently. Working with Cliff has been nothing short of excellent in every way. We will continue to use Cliff Hyra on our current and all future patent issues. I highly recommend Cliff Hyra for all your IP needs.

Intellectual Property Services you can count on!

Intellectual Property Services you can count on! Cliff is now our only source for all IP services. He is the 3rd lawyer we have dealt with in this subject matter. Additionally, over the past 2 years we have probably spoken or obtained quotes from at least another 4 or 5 and Cliff is simply the best to deal and speak with. All I can say is that he has an uncanny way of getting into my head and interpreting my thoughts the way I would like to say them. His attention to detail and the way he adds his own additional comments are invaluable. I really like Cliff and he has never steered us wrong yet. He is currently managing 2 Utility Patent applications as well as a Design Patent and 3 Trademarks for us. Now he’s Kick’n It!!! Alan McBrearty Co-Founder and President Alpha Sun & Sport

claiming for trademarks in the USA

in 2010 we gave order to Mr. Hyra to get several TM in the USA and ©. Very gentle communication and good results.

I found Cliff through online search. It was really a pleasure working with him on a trademark registration engagement for my company. His dedication, knowledge and more importantly sincerity and willingness to understand requirements and advise/deliver best solution is highly appreciated. I liked his way of dealing with the problem and the fixed cost model that eliminate surprises later in the process. Cliff is a true professional who provides excellent servivce at affordable cost and I highly recommend him for anyone looking for IP related advice and services.

Just the one for all of our Trademark application needs

Hyra IP delivers "the goods." Clifford Hyra communicates effectively and respects the budget, carefully and expeditiously explaining both nuanced legal and total cost ramifications of key decisions. Exactly the type of service that most intellectual property owners require to navigate the USPTO and successfully secure legal protections. If Cliff doesn't know the answer to your application question straight away, it's probably an hour--or at most a few days--to resolution. You need only to ask. (And believe, there can often be much to ask.) Hyra IP succeeded in prosecuting all three of our, at times challenging and unusual, U.S. Trademark applications from filing date through to issuance. Throughout we were impressed and very, very glad at many a fork in the road that Cliff was there to advise. Like a light illuminating the paths as far ahead as possible, Cliff reliably showed to where each alternative might lead. I consistently felt as though we were making the most informed and well reasoned decision. The result: we have Hyra IP's services to thank for helping us chart what we feel to have been the absolute best course for our IP protection strategy! As such, to those like us who have a lot invested in their intellectual property, Hyra IP represents an honest deal at any rate--and there are certainly much costlier means to apply that would not have improved the outcome at all. We actually lucked out and found Hyra IP through the Internet. Ours is a small non-profit concern. Having attorney relatives and acquaintances whom to draw on, but never having used the services of an outside attorney before much less relying on the Internet as a tool to research and find one, we were quite frankly amazed by the care and practical knowledge brought to bear by Cliff Hyra's services. After a bad multi-year experience involving reliance on much advice from a do-it-yourself patent book, we independently made a wise decision to resign ourselves to the narrower legal protections afforded by trademarks for our precious, if somewhat amorphous (digital), intellectual property. However, we didn't want to repeat our previous costly mistakes with The Office by attempting in-house again what looked to be a more straightforward (though nonetheless winding) trademark application process. We grudgingly "put the pennies in the jar" for an attorney. All the while our fear was potentially throwing more good time and money after bad or, perhaps worse, receiving bad advice to continue fighting either for a cause relatively lost to begin with from a legal point of view, or for protections themselves perhaps quite altogether meaningless and so not worth the while nor in our best interests to continue pursuing. Then we found Hyra IP. One year and three trademark issuances later, I now believe that had we known about Clifford Hyra's services even sooner, so much worry would have been eased early-on! Truthfully, he also helped restore our faith in the system. Thank you, thank you, Cliff. Job well done. We highly recommended hiring and utilizing Hyra IP for prosecution of U.S. Trademark applications.

Extraordinary service near Washington DC--who would have imagined?

Mr. Hyra offers an exceptional quality of service at a very reasonable price. He began with a complete summary of the total costs so there were would be no surprises later on. Someone might expect an affordable service provider to compromise things like quality and attention to detail. But this was not a "file-and-forget" approach. Mr. Hyra began with a thoughtful critique of my invention, revealing aspects of the design that had not been fully developed. He worked with me to fill in the gaps and produce a write-up that was comprehensive and clear. Beyond the patent itself, Mr. Hyra provided practical advice that allowed me to commit funds only as they are needed. This helped to keep initial costs manageable at a time when every dollar counts. Looking back, his professional advice was exactly what I needed. I give two thumbs up for Mr. Hyra. He has exceeded my expectations in every way.

Mr. Hyra handled our provisional patent. He eagerly answered any questions I had and had the most transparent processes and pricing that I found. Mr. Hyra was always professional and available. I highly recommend Mr. Hyra.

When it was time to renew my trademark, I hired Hyra IP and was extremely pleased with the process. Hyra IP’s fees are reasonable and Cliff Hyra handled the renewal quickly and efficiently. I highly recommend Hyra IP and plan to use them again for trademark and copyright work.

As president of Opulen Financial Group LLC it was a top priority for me to protect our brand, logo and image from duplication. When we hired Hyra IP to help us protect our brand we were extremely impressed with Clifford's extensive knowledge and impeccable attention to detail. In particular we were extremely satisfied with his response time to our questions as well as for demonstrating the utmost integrity in his pricing model. We believe we have found an attorney who will put the needs of his clients in the forefront of everything he does. We would strongly reccomend Hyra IP to anyone in need of intellectual property services.

Cliff has a deserved reputation as the go-to intellectual property attorney in Northern Virginia. He possesses a wealth of knowledge and is truly dedicated to protecting the interests of his clients. I have found him to be effective, efficient, and a pleasure to work with. I endorse Cliff's work without reservation.