Lauded by the Delaware County Daily Times for his “great intelligence, skill, courage and - most importantly – integrity.” 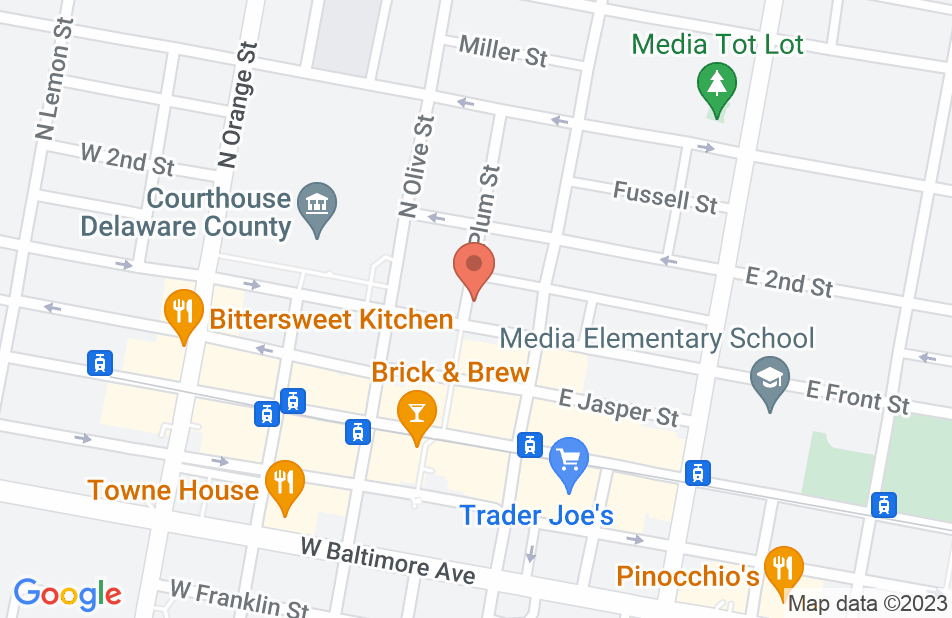 When that car hit us last September, our lives changed. We began a period of our lives that was scary and very upsetting. Nothing like this had ever happened to us before. When we went into Mark Sereni's office and began our case, we put our faith and trust in Mark and his staff. They were always very honest and informative, answered every question patiently, they came to our home to help us, thought of every detail in preparation for our case and represented us with integrity. We could not be more grateful to Mark and his staff for all they have done. The work that they do really makes a difference in people's lives. We are very grateful to Mark and his team.
This review is from a person who hired this attorney.
Hired attorney

Mark is an awesome lawyer, he was attentive, informative, he was invested in all the steps he make for my case right down to the very last detail. Nothing slipped through the cracks with him.
This review is from a person who hired this attorney.
Hired attorney

I was hit from behind in my car and Mark and his Team went above and beyond, working on my behalf against a very difficult insurance company and defendant. I would highly recommend Mark and his firm to anyone needing quality legal representation.
This review is from a person who hired this attorney.
Hired attorney

Great experience from start to finish.

I was involved in a vehicular accident with another motorist where I sustained injury as a result of the other driver. Following my accident, I felt the need to seek representation. Mark Sereni was recommended to me with high praise from a family member so I reached out to him and his team. After trading a few emails, I was able to set up a time to speak with Mark and his assistant Jonathan over the phone to go over the details of my encounter. Following the recap of the events, Mark graciously took the time to explain the legal rights that I would be entitled to, and to describe several possible scenarios that may occur. From each of the scenarios Mark would then describe the proceeding steps he would take and then the impacts each step would have on the outcome. At the conclusion of our conversation I felt confident that Mark had my best interests in mind. Mark gave me time to think about what we had discussed and after a day or so I reached out to him again, this time to employee his services. From the beginning Mark and his team worked diligently to push the insurance companies toward a determination. All the while keeping me informed throughout the process. Sure enough, things unfolded pretty much exactly as Mark had described. It was clear that he was prepared and ahead of each step of the process. Things moved surprisingly quickly thanks to Mark and his team’s persistence and they were able to achieve the “best case” scenario out of all the potential outcomes. Because of this the return covered my expenses, damages, and pain & suffering bringing me to as close to whole as I could ask for. Thanks Mark! Sean
This review is from a person who hired this attorney.
Hired attorney

Attorney Sereni and his staff handled a deformation case between our church and a local newspaper. They were successful at get the newspaper to print a new article based on facts. The newspaper corrected each error made in the original article. We found Attorney Sereni and his staff to be professional, knowledgeable, and extremely proficient. Not only would our church use their services in the future, we would recommend them to others.
This review is from a person who hired this attorney.
Hired attorney

I would like to share my personal experience with anyone looking for an honest lawyer who isn't all about the mighty dollar. Here is why I highly recommend Mark Sereni. I am a single mother of teens and young adults. My oldest daughter was recently in an accident and I am being sued for $7,000 that was not covered by insurance. I spoke with the lawyer hired by my insurance company and felt he didn't have my back. NO PASSION! So, I reached out to Mark on facebook as he lives in the community and we share mutual facebook friends. He not only listened to my concerns, he gave me advise and guided me through this difficult situation. He then followed up with a letter directing me what to have the insurance attorney do for me. All without asking for a penny. Mark, your are the best! I would be glad to refer you anytime. Thank you again! Linda
This review is from a potential client who consulted with this attorney.
Consulted attorney

Attorney Mark Sereni tirelessly work on behalf of his clients. He epitomizes the concept of a "true advocate" dedicated to your clause as though it is his very own. Mark is highly competent and capable, and well versed in many aspects and areas of law. Moreover, he is honest, straight-forward and upfront in providing a clear and comprehensive picture of your case, as well as prospects. I would recommend Mark above all others....
This review is from a person who hired this attorney.
Hired attorney

I retained Mark Sereni to represent me in an employment issue. Mark and his staff are the epitome of professionalism. The quick response and efficiency of Mr. Sereni and staff ensured that I was immediately informed of developments, phone calls were returned promptly and they took as much time as necessary to answer questions in a clear and understandable manner. Due to the skilled representation provided by Mr. Sereni and staff my case resulted in a successful resolution for me. I would highly recommend this firm to anyone in need of legal counsel.
This review is from a person who hired this attorney.
Hired attorney

Mark as his firm represented me in an insurance claim. Their attention to detail and professionalism settled my lawsuit in a timely fashion. His willingness to fight for my best interest sets him apart from others.
This review is from a person who hired this attorney.
Hired attorney

Mark and his firm represented me in a major motor vehicle accident case. Another lawyer I had gone to told me he didn't think my case was worth much. Mark and his firm handled my case so thoroughly, professionally and perfectly that he was able to obtain 100% of the policy amount. INCREDIBLE job!! Thank you SO much. I was well informed, and well taken care of by Mark and his staff. Also, I have a deposition that I was very nervous about and Mark made sure that I was comfortable and felt protected from the defendant. When it comes to lawyers, no one brings THE HEAT like Mark Sereni! Thanks Mark!
This review is from a person who hired this attorney.
Hired attorney
See all reviews

Mark has an impeccable reputation for getting results for his clients and is well regarded by the legal community for his skills and abilities both in and out of the courtroom.