Mr. Daffner is the founding member of the firm of Daffner & Associates, and serves as the Managing Attorney.  He has personally handled thousands of legal matters in a wide variety of jurisdictions, and is a highly-respected member of the defense bar.

In addition to his law practice, Mr. Daffner serves as a specially-appointed Arbitrator in the Civil Division of the Court of Common Pleas, as well as in the United States District Court, and recently presided over a trial involving an aggregate $8,000,000.00 claim in a contract action brought by one of the world's largest steel producers.  Mr. Daffner also serves as a court-appointed attorney representing children in complex custody matters, and is the Chair of the Civil Service Commission overseeing police disciplinary matters in the South Hills area.  In addition, Mr. Daffner is currently serving his fourth term as an elected County Committeeman, and has been a candidate for Judge of the Court of Common Pleas of Allegheny County.

A firm believer that the key to success is knowledge, Mr. Daffner is also a certified instructor for the Supreme Court mandated Continuing Legal Education program, and has authored a variety of legal texts and teaching materials including the 3-part series, Criminal Practice for the General Practitioner and Essentials of Pennsylvania Criminal Trial Practice.

Mr. Daffner is active in a variety of charitable and community organizations, including the Cystic Fibrosis Foundation, the WEAE Missing Children Campaign, the Leukemia & Lymphoma Society, and the Boy Scouts of America (Eagle Scout mentor).  Having been nationally-ranked as a martial artist (2003 National All Martial Arts Invitational, Men's 30-39 Div.), Mr. Daffner also serves as an instructor in the areas of traditional martial arts as well as close-quarters unarmed combat, and assisted in the formation of an after-school karate program directed toward inner-city youth developed by internationally-renowned Grandmaster Chun Sik Kim.

The recipient of a variety of honors and commendations, Mr. Daffner has been selected as a Pennsylvania "Super Lawyer," placing him in the top 5% of attorneys in Pennsylvania, as one of the Top 100 Trial Lawyers by the National Trial Lawyers, and as well as one of Pittsburgh's Legal Leaders. 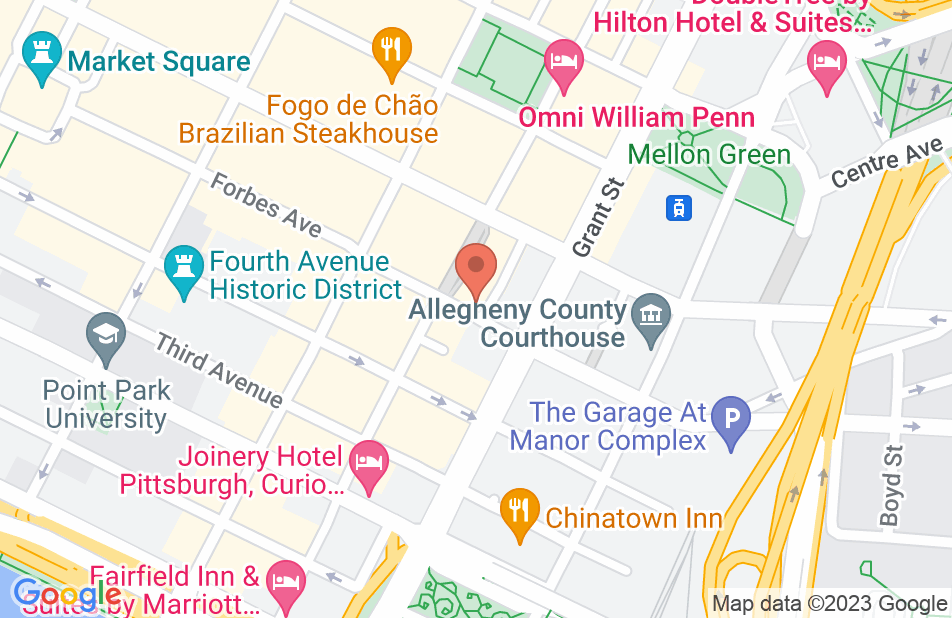 Attorney Marc Daffner represented me in a real estate transaction when I was one of 148 plaintiffs against a multi-state realtor con man. Although real state law is not Marc's specialty, he was the only lawyer out of the 148 other cases who succeeded in "piercing the corporate veil" and won us a treble (triple) damage award against the defendant. I would recommend him to anyone, anytime, under any circumstances for any legal need. He was ultra-professional, incredibly intelligent, (he knows the law like the back of his hand) always prompt and worth every penny-and then some. You cannot do better than this man for legal help. I await the day he is elected to the bench and can bring fairness back to the courtroom. Attorney Daffner also assisted my college aged son when he got involved in a DUI incident with other young people who had become inebriated and then gotten behind the wheel of a car. We thank God that our son was able to complete his military duties without undue punishment due to the legal effort of Marc Daffner. There are not enough words to explain how good this lawyer is, and it is your loss if you pass him by.

Daffner rocks! I would definitely recommend him - these cops were lying and had made up evidence and he stopped them in their tracks! Not too many lawyers (I've had a few) will go the extra mile. He will!
See all reviews

I can confidently endorse attorney Marc Daffner for all criminal law matters. He is professional and prepared.

I endorse Marc. He is a highly skilled attorney that is well respected in the legal community.

I practice family law, and do not have a criminal law practice. When I have a client who encounters a criminal law issue, I send them to Marc Daffner.