Take Care Of The People You Love. Call Us About Our Free Living Trust & Long-Term Care Seminars.

Frederick P. Davies is the founder and senior attorney of the Davies Law Firm, P.C. and a noted speaker on Estate Planning, Living Trusts, Long Term Care, Medicaid and Taxes.  He earned a Bachelor of Arts in Political Science from the University of Vermont in 1982 and a law degree (Juris Doctor) from the Syracuse University College of Law in 1985.  Following graduation, Mr. Davies was admitted to practice law in all the state courts of New York and Connecticut.  He is also admitted to practice law before the United States Supreme Court, the United States Tax Court and the Federal District Courts for the Northern and Western Districts of New York.

General’s School (Air Force Law School) where he served as an Instructor and the Subject Matter Expert on Estate Planning for the United States Air Force.  Colonel Davies retired from the military on December 14, 2015.

Mr. Davies, upon his release from active duty in 1989, worked for a number of law firms in Central New York.  Wanting to focus his legal practice on Estate Planning, Mr. Davies started the Davies Law Firm, P.C. in 1993.  From simple beginnings, the firm has become one of the prominent law firms in Central New York focused on Estate Planning, Living Trusts, Estate Administration, Probate, Long Term Care, and Taxation.

Mr. Davies is a member of the American Bar Association (Wills and Estates Section), the New York State Bar Association (Trusts & Estates and Elder Law Sections), the National Association of Insurance and Financial Advisors, and the Estate Planning Council of Central New York. 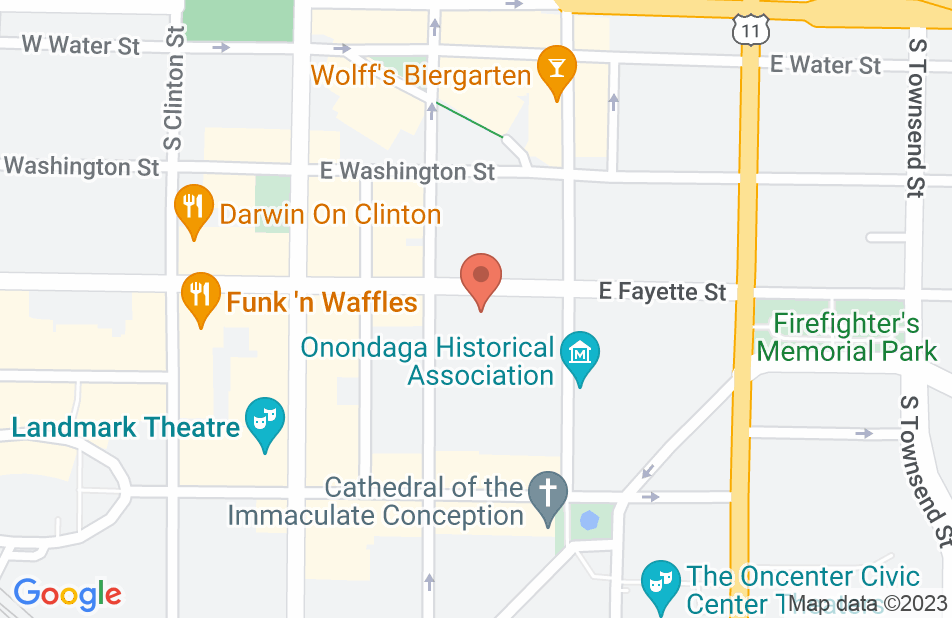 Mr. Davies did a trust for me and was very knowledgeable and very persistent, it took a while for me to fill out all the paperwork. His office as well as Mr. Davies himself have been very responsive to all questions that I had. I would highly recommend the Davies Law Firm.

My husband and I just had a Trust done with the Davies Law Firm. Mr. Davies was very knowlegable and professional. His Staff was very friendly and knowlegeable also. I would highly recommend his firm to prepare your estate plan.

We used them for estate planning; Living Trust. Friendly, seemed really interested in helping us. Couldn't ask for a better experience! His staff are really helpful, made the experience really easy. Would, and have, recommended him to others.
This review is from a person who hired this attorney.
Hired attorney

Attorney Davies put together a living trust for me and my family a few years ago. Whenever I call the office they are always helpful and friendly. If you need estate planning, I highly recommend the Davies Law Firm.
This review is from a person who hired this attorney.
Hired attorney

Davies Law Firm helped us set up a trust, and has been extremely helpful with a series of other, unrelated legal issues. Fred and his staff have been consistently responsive and helpful. We recommend Fred and his firm enthusiastically.
This review is from a person who hired this attorney.
Hired attorney

I recently set up my estate plan with the Davies Law Firm. My experience was wonderful. Everything went smoothly and the legal assistants were very helpful throughout the entire process. Trust Protector provisions were brought to my attention and once it was explained, I believe it makes perfect sense. I have free phone calls for life so I am able to call with any questions. I feel very comfortable that my estate is in good hands.
This review is from a person who hired this attorney.
Hired attorney

I had Fred Davies set up a Trust for me, it was efficient and painless. When I required changes, I delegated to my daughter who has Power of Attorney for all my legal, financial and health affairs. The Davies Law Firm was terrible to deal with. They were rude, disrespectful to my daughter, refused to accept the NYS Power of Attorney. In performing a detailed review of the Trust, my daughter noticed they had appointed themselves as "Trust Protector". This was never discussed nor approved when setting up the original Trust. I can remove Davies Law as Trust Proctor by filing an Amendment to the Trust (for a fee). I amended with another attorney and severed all relations with the Davies Law Firm.
This review is from a person who hired this attorney.
Hired attorney

Did a trust and also snuck himself in as a trust protector... did catch and fix before signing... agreeable before getting paid, but very difficult after he was paid. A very unpleasant experience. Wish I had gone elsewhere! Handling of an estate was a nightmare afterwards! Errors were constant and I ended up doing most of the work.
Frederick Davies' response: I was surprised to receive this anonymous review. Although it is very difficult to respond without knowing who posted the review, I have the following response. I have never tried to "sneak" myself in as a Trust Protector. We review each and every document very carefully with our clients. If they have any changes, we make certain that the documents are 100% exactly what they want before signing, to include the Trust Protector provisions which serve a very important purpose in a trust agreement. In addition, all of our clients have free telephone calls for life. If this person was in fact a client, he or she could have easily contacted me or my office staff with any problems he or she might have had. No such person comes to mind for me or my staff. I do not believe that this review was made by one of my clients. The reason is simple... my client would have to be dead before the estate would need to be resolved. The same person could not be both my client and the person who would ultimately resolve the estate. The only thing I can think of is that the person who posted this review was a disgruntled heir who was disappointed with his or her share of the estate when my client died. Frederick P. Davies

Fred expertly handles the questions presented to him and I fully endorse him.

Fred and I spent much time together at estate planning events given by the American Academy of Estate Planning Attorneys. I find him to be a knowledgeable and caring estate planning attorney. I would be most comfortable recommending clients to him knowing they will be well cared for.

I have known Fred for over 20 years. He always wants to do a great job for his clients. He sees the big picture and finds the right solution for his clients. I would never hesitate to refer estate planning related work to Fred.