We created Abdo & O'Brien, P.C. as a client-centered organization.  Over nearly 15 years, I have handled thousands of workers' compensation cases and I have represented injured workers, insurance carriers and employers.

In January of 2019, attorney Michael J. O'Brien and I decided to merge our firms. Abdo & O'Brien, P.C. has the freedom to take on the representation of those whom we believe are most in need and we pride ourselves on providing exceptional representation to injured workers all across Central and Northern New York.

Alex’s primary focus is in Workers’ Compensation matters, where he has handled thousands of cases since 2005, appearing on behalf of claimants, insurance carriers, self-insureds, and municipalities at hearings and trials in Syracuse, Utica, Watertown, Binghamton, Rochester, Norwich and Elmira.

Alex honed his analytical skills while clerking for Judge William Van Nortwick, Jr. on Florida’s First District Court of Appeal and working as a Legislation Analyst at the Florida House of Representatives.

Prior to moving back to Syracuse, NY in 2005 to be closer to family, Alex amassed litigation experience with over 100 trials (non-jury and jury) at the Hillsborough County (Tampa) Public Defender’s Office.  As a result, Alex is equally skilled in litigation and negotiation.

Alex worked as a partner with a prominent Syracuse law firm for almost eight years, representing carriers and employers in workers’ compensation matters.  While Alex excelled and drew consistent praise from his corporate clients, he didn’t enjoy the work which left him feeling unfulfilled. Given that Alex has always enjoyed working with and helping people, he resigned his position in 2013 and founded his own law firm, Abdo Law, to focus his skills on providing for the needs of injured workers throughout NYS. 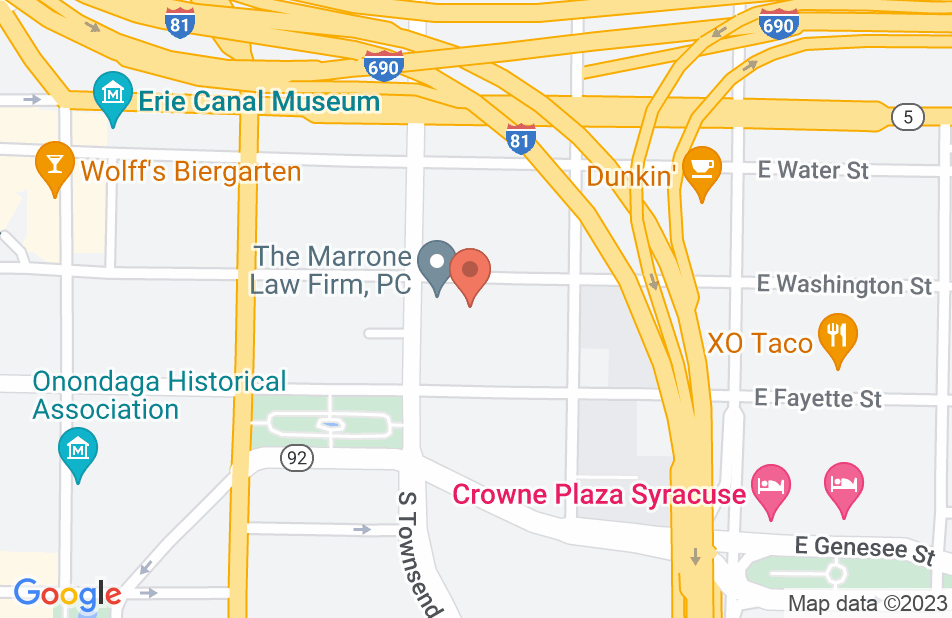 Alex did a fine job on my case. You can ask him any question and he will give you an answer. It might not be the answer you want but it is an honest answer. He shows empathy during a difficult time in a clients life. He returns your calls as many lawyers seem to be to busy to do so. Alex is a down to earth person and he works for you.
This review is from a person who hired this attorney.
Hired attorney

I had a work injury back in 2001. Had a lawyer in Auburn who was great but retired. The lawyer who took his place was terrible. Never spoke on my behalf or in my favor when going to a hearing. I then had a flare up of this injury in 2013 and found out my lawyer no longer worked for the firm in Auburn. Mr. Alex Abdo was recommended to me, and I called him for a consult. I could tell right of the start he was the lawyer for me. He will work for your health and your rights according to the workers compensation laws. I am so glad he is on my team. If you need a great workers compensation lawyer, give Alex Abdo a call you won't be disappointed.
This review is from a person who hired this attorney.
Hired attorney

My daughter was injured at work and initially I advised her against hiring an attorney. She hired Mr. Abdo and thank goodness she did. He has been outstanding with the care and concern of her case and steadfast in her defense. He keeps my daughter updated promptly of all communications made with the insurance carrier (who has filed an appeal as the Judge approved her case). She is in excruciating pain and is in need of surgery...which Mr. Abdo is vigorously fighting for.
This review is from a potential client who consulted with this attorney.
Consulted attorney

I was injured while at work and after hearing all the horror stories about workers compensation, I decided to seek legal advice. With the very first phone call to Mr. Abdo's office, I felt relief. Alex is very personable and very knowledgeable. He spoke to me in terms that I could understand and I felt completely informed every step of the way. My case went along very smoothly, and I attribute this to Alex. Other than the injury itself I found the process to be very interesting albeit, pleasant. I believe the negative hype given to these cases must come from people NOT represented by Alex!!! Please do yourself a favor and contact his office for guidance, you will not be disappointed.
This review is from a person who hired this attorney.
Hired attorney

So glad I hired him!

Alex helped me go through worker's compensation with my employer for carpal tunnel. He was always available for any of my questions, thorough with his information, and helped me get through a confusing and somewhat difficult process in order to get my surgery done. I Highly recommend Alex to anyone going through a worker's compensation claim. Do not try to do this on your own and be prepared for it to take quite some time to finish the whole process. Thank you Alex for all of your help!
This review is from a person who hired this attorney.
Hired attorney

Workers Compensation- Lower Back and Neck

This man is very considerate and listens to what I have to say. He is courteous with his answers and has knowledge of the workers compensation law. It was a blessing that I found him since he makes this process painless for me. Calls are always returned and he even gives me a periodic call to see how I am doing. He will answer emails promptly, usually with a follow up phone call. If you are looking for someone that cares about your welfare and helping you get the best outcome for your workers comp case, this is your man!
This review is from a person who hired this attorney.
Hired attorney

Mr. Alex Abdo was referred to me after having a severe work related injury. He came highly recommended in dealing with all aspects of workers compensations law. From the very beginning Alex treated me like family not just a client. He would check in regularly on my progress from how physical therapy went to pain relieving injections. He returned my calls in the evenings and even the weekends. After surgery Alex took care of every legal aspect to help with my recovery. From my experience with Alex it was always about me taking care of my injury and Alex would take care of the rest. I truly admire his patience and passion for his clients. He is a respectable individual that I would highly recommend to anyone dealing with a work related injury.

Alex is an experienced and well prepared advocate. He represents his client's in a zealous and professional manner. I am pleased to endorse Alex!

I have gotten to know Alex well over the last eight years as opposing counsel on criminal matters, as well as worker's compensation matters. He is extremely hard working and does an excellent job in representing his client's. Alex is a great choice for representation in the areas of worker's compensation, real estate and criminal defense.