Lorraine R. Silverman is a Partner with Copps DiPaola Silverman, PLLC. She practices exclusively in the field of matrimonial and family law and represents individuals in the negotiation and litigation of all family law matters, including, but not limited to prenuptial agreements, separation, divorce, custody and support, and domestic violence matters. She has extensive experience representing clients in both Supreme and Family Court. As part of her practice, Ms. Silverman serves as an Attorney for Children in Albany County. Ms. Silverman is also a member of the Collaborative Divorce Association of the Capital District. Ms. Silverman was selected as a 2016, 2017, and 2018 Upstate New York Rising Star by Super Lawyers Magazine.

In addition to her private practice, Ms. Silverman volunteers her time to serve on a number of Committees and Boards. For example, Ms. Silverman was appointed to the Albany County Bar Association’s Board of Directors where she currently serves as the Co-Chair of its Pro Bono Committee. She was also selected to serve on the Executive Committee of the N.Y.S. Child Welfare Court Improvement Project. She serves as a member of the New York State Bar Association’s (NYSBA) Committee on Children and the Law, and she is a member of NYSBA’s Family Law Section where she serves on the Continuing Legal Education Committee and the Committee on Domestic Violence. She is also a member of the Capital District Women’s Bar Association. Ms. Silverman also volunteers her time close to home by serving as President of School’s Out, Inc. Board of Directors and as a Committee Person for the Bethlehem Democratic Committee.

Prior to joining Copps DiPaola Silverman, PLLC, Ms. Silverman’s private practice focused exclusively upon the representation of individuals in divorce and family law matters. Prior to her career in private practice, Ms. Silverman’s practice began in the public sector, where she was the Managing Attorney for the Kathryn D. Katz Fellowship Program at The Capital District Women’s Bar Association Legal Project, Inc. (“The Legal Project”). While at The Legal Project, Ms. Silverman oversaw the Fellowship Program and the Reduced Fee Matrimonial Program, training and overseeing law students and recent law school graduates in the areas of matrimonial and family law and providing technical assistance and advice to volunteer attorneys. Ms. Silverman continues to provide assistance to victims of domestic violence through The Legal Project’s Pro Bono Attorney Panel.

Ms. Silverman resides in Delmar, New York with her husband, Adam, their son, and their dog.

Ms. Silverman received her J.D. degree with a concentration in family and elder law from Albany Law School in 2005, where she received the Martin H. Belsky Graduation Prize for Commitment to Public Interest.  She is a member of the Family Law Section of the New York State Bar Association, the Capital District Women’s Bar Association, and the Albany County Bar Association. 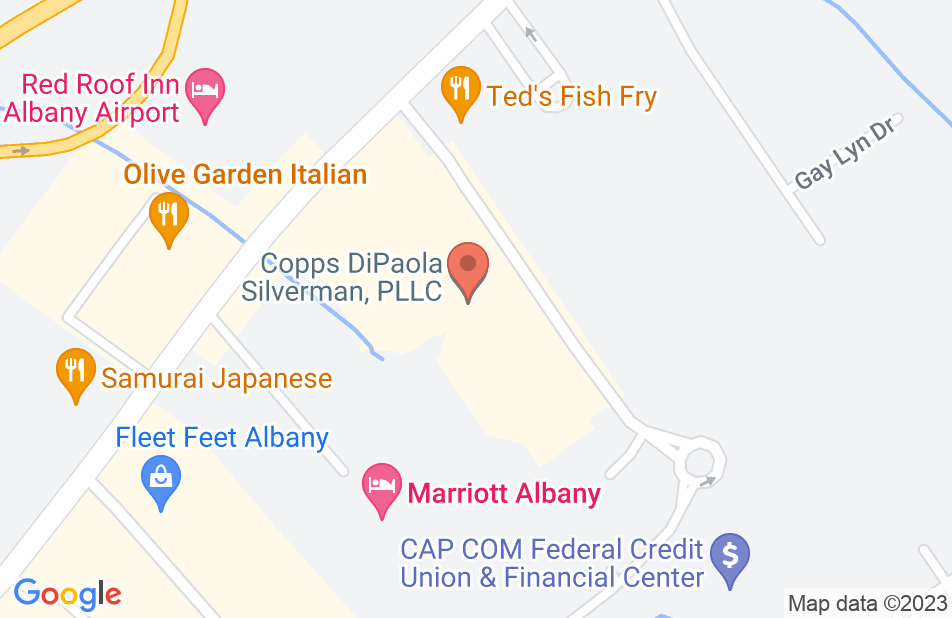 I highly recommend Copps Dipaola Silverman for your highly emotional hardships relating to the separation of relationships, families and the dividing of lives. In my experience, through the trial and error of other firms, Copps Dipaola Silverman firm became my tribe when I needed one the most. Each member extremely motivated, compassionate, highly knowledgable, skilled and strong. They made my voice count, worked above and beyond to be availible during each critical moment, and helped to realistacally focus my energy into what was the best outcome for my family and I. I would recommend them highly, and can't thank them enough for how their professional help has touched my life forever.
This review is from a person who hired this attorney.
Hired attorney

Lorraine Silverman was assigned to me by the Albany NY County Family Court to assist in a modification of my child custody. I must say that she was very professional, knowledgeable and gave me excellent service. She was able to assist me in requesting for the Judge to change my custody agreement to allow me to move with my child out of State to be closer to family as I am here alone with my children and my daughter's father is not actively or consistent with visitation, child support or parenting. I am very grateful for all the advice that I received from her.
This review is from a person who hired this attorney.
Hired attorney

Lorraine alone is a very kind hearted and wonderful person. she takes her job very seriously and is out to fight for what needs to be done. in my situation my husband up and abandoned my three children and me. she was able to take on my case with out a doubt. she was there day and night when I needed her. there wasn't a time where she didn't show up next to me in court or when I had a question she explained everything before I signed and walked me through it step by step. the money was well worth spent. she def puts her own feelings into her cases. her office is very friendly as well and all work together great! thank you Lorraine for all you did for my family in this tough time !
This review is from a person who hired this attorney.
Hired attorney

Lorraine Silverman went above and beyond of what I was expecting from a lawyer. From the first consultation until the very end of my case, she was fully engaged, attentive, diligent, never leaving a question unanswered, never dismissing any of my concerns, always looking out for my best interests while making it cristal clear what were the options available. I really felt that I had in her someone that was not only advocating for me, but was also there to guide me. When the emotions could compromise my judgment, she made sure that I understood every step and consequences of my choices and did so professionally, but also demonstrating that she cared. Going through a divorce it is difficult not matter what. Amicably or not, it's a deconstruction process, it is emotional and painful regardless. Having a lawyer of her caliber was a gift. Highly recommended!
This review is from a person who hired this attorney.
Hired attorney

I cannot express my gratitude enough for what Lorraine Silverman did for my family and I. I had attempted a DIY divorce and had come across plenty of obstacles between the communications with my ex husband and my understanding of the paperwork, it took me over two years to get as far as I could and I was still unable to achieve my goal. After just one meeting with Mrs. Silverman at her office, she talked me through what my goals were with my divorce and she was able not only to understand what I was going through but to complete the paperwork that I was missing and get my divorce finalized in a matter of one month! I was amazed at how efficiently she accomplished what took me two years to do on my own, I am eternally grateful for her assistance in my divorce.
This review is from a person who hired this attorney.
Hired attorney

I worked with Lorraine during a very difficult time in my life. She helped me through my divorce by making navigating this overwhelming process understandable. She treated me like a friend- with kindness and respect. I can't say enough good about her and how much she helped me. Several years have passed now and all of it seems like a distant memory, but I really wouldn't be here without her help.
This review is from a person who hired this attorney.
Hired attorney

Lorraine Silverman is a good luck charm for me.she is too hard working,honest,intelligent and great attorney.she is one of the attorney who cares for clients feelings than money.i was going through hell because of my husband for my Childs custody and she helped me and guided me as a friend finally I got sole ,physical custody of my daughter.Thank you so much.
This review is from a person who hired this attorney.
Hired attorney

Lorraine was absolutely wonderful. She took the time to listen to me,provided me with a very detailed separation/divorce agreement that worked for both my ex-husband and i. I would highly recommend her for matrimonial and other legal issues. She has helped me with tenant issues and my will as well. She is the first person i call when i need legal advice.

I have co-counseled with Lorraine on a complex family law and matrimonial matter and have found her to be dedicated and professional. She is an excellent litigator who will do what is necessary for her client and yet with a practical touch necessary to obtain results. I would recommend her to anyone seeking a highly competent matrimonial or family law attorney without reservation.

Working with Lorraine was always a positive experience. Each time we met I felt that she was concerned about me as an individual and made sure I fully understood what was going on throughout the court process. It was very obvious while working with her she was very knowledge about Matrimonials and Family Law. Finding an attorney who takes the time to answer your calls and questions is difficult; Lorraine always answered or would get back to me within the same day, making me feel like a priority not a chore. Lorraine is a great attorney and I would highly recommend her.
See all reviews

I endorse this lawyer. One thing I admire about Lorraine is her dedication to her work. Lorraine works tirelessly each day, making all of her clients a priority. Lorraine has extensive knowledge about matrimonial/family law, and is nothing short of a professional, ethical attorney. Her passion for the law shines through her work and advocacy for her clients, in and out of the courtroom. If you want an attorney who will provide support, listen and zealously advocate for you, Lorraine is the attorney for you!

I endorse this lawyer. Lorraine is a true professional and has a great personality for working in this field of law. Lorraine is compassionate and is determined to get the best resolution for her clients. I highly recommend Lorraine to anyone who is in need of her services.

I endorse this lawyer. Lorraine is a true zealous advocate who devotes herself to each and every client. Her years of experience in matrimonial law coupled with her passion for representing individuals in need make her the ideal attorney.

Ms. Silverman’s degree of dedication to providing access to civil legal services for all, particularly for victims of domestic violence in the areas of matrimonial and family law, is unmatched. Ms. Silverman encapsulates the very characteristics every attorney should aspire to possess , acting as an inspiration to not only to her colleagues, co-workers, and mentees, but to her clients as well.

I highly endorse this lawyer. Lorraine is an exceptional attorney. Intelligent, tenacious, and always prepared, Lorraine provides her clients with optimal representation. I trust Lorraine with some of our most complicated matrimonial and family law matters. Lorraine is able to achieve success for her clients because of her intelligence and preparation which particularly shine in the Courtroom. Lorraine is a highly respected member of the legal community and is a valuable member of Mack & Associates, PLLC. I highly endorse Lorraine.