Irene Angelakis is a dedicated and experienced matrimonial and family law attorney. Throughout the last nine years she has worked in both the private and public sector.

Since her admission to the BAR, Ms. Angelakis has represented clients in matrimonial, child support, family offense, custody and visitation proceedings.  Upon graduation, Ms. Angelakis worked in the private sector handling matrimonial and family court cases.  In 2009, she joined the Children’s Law Center where she fiercely advocated for hundreds of clients in custody, visitation, paternity, neglect, termination of parental rights, family offense, substance abuse, and domestic violence proceedings. In that time, she successfully litigated over twenty trials involving complex issues of law and fact and was eventually promoted to “Senior Attorney.”   In the Spring of 2014, she joined Schwartz & Ciesinski, LLP and one year later she founded her own practice dedicated to representing clients in matrimonial and family law matters.

From 2010 through 2014, she was an active member of several court based committees including the Family Court Domestic Violence Working Group, Child Protective Working Group, and the Disproportionate Minority Representation Working Group.

Ms. Angelakis was selected to the New York Metro Super Lawyers Rising Stars list in 2016 and 2017 and was named "Top 40 Under 40" in 2017 by the National Advocates.  In 2015, she was named "Who's Who of Distinguished Alumni" by the Worldwide Association of Notable Alumni. 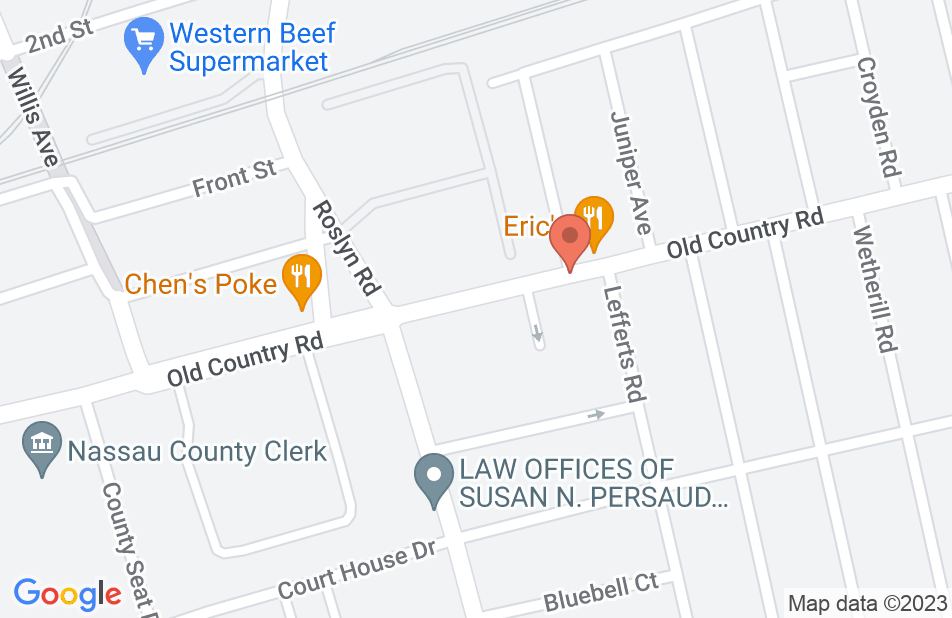 Intelligent & Aggressive Gets the Job Done!!!

I had an important case and it was expeditiously completed and won thanks to her excellent oral and written skills and knowledge of the law!!!

Best decision i ever made. Irene is an aggressive litigator that really takes the time to make sure you walk away with the best possible outcome. She is relentless in fighting for her clients needs, and never backs down from a challenging situation. If you need a divorce lawyer, this is your champion!

Your case couldn't be in better hands...

Irene handled my divorce, and I would give her more than 5 stars here if I could. She was not only very knowledgeable and experienced in her field, but inspired so much confidence that everything was going to turn out ok (which it did, better than ok actually). She handled every situation with compassion and was sensitive to even the most delicate issues, she basically took the stress and worry out of my hands and handled everything, with a level of confidence and competence that was very reassuring. She never failed to give me excellent advice and was always responsive when I needed to get in touch with her, she returned my calls promptly and never left me hanging or wondering if my interests came first. And she was a fierce advocate for those interests at all times, she maintains professionalism but never lets the other side push her around. I don't think you could be in better hands, if you want somebody who will go to bat for you and make sure your case is handled the best way possible. I'm truly thankful to know Irene and to have her work on my case.
This review is from a person who hired this attorney.
Hired attorney

Irene is an excellent lawyer who helped through a very difficult time in my life. She was always there for me when I needed her, even on weekends and holidays! She always knew how to handle every situation. She worked out the best resolution possible for me with confidence. She looked at all angles of the situation and did what was best for me and my family, and at a very fair price. I highly recommend her for anyone considering divorce.
This review is from a person who hired this attorney.
Hired attorney

I had a very challenging case involving custodial and support stipulations and I wasn't sure what my rights were. Irene was very patient and asked me all the pressing informational questions and provided all the best advisement on how to file my paperwork and assert myself to do the best by my family. She's very precise and no-nonsense, explaining things very easily so you walk away feeling confident and knowledgable. I've recommended her to many others who need a reliable attorney to help them through family court litigation etc.
This review is from a potential client who consulted with this attorney.
Consulted attorney

WoW one of the best in Tri-state! Period.

I recieved a warrantless order of protection from my 17 year old child's mother who attempted to get back custody of the child at 17 for child support benefits after a disagreement. After being served I new I needed a great lawyer in the family court field. I was referred to law firm partner Irene Angelakis. And from the first 15 minutes speaking to her I felt confident that I will defeat the case and close this chapter Asaap. Irene was knowledgable, intellectual, experienced, professional, and I sincerely felt before and during the 2 day court appearance before having the case won and dismissed Irene cared about me and my family. As far as finciancially of course she must make a living but the retainer fee and final cost of both was very financial pro friendly and reasonable for a middle class guy like me. I love it! Irene lastly I want to say thanks you so much and you deserve the advertised praise you get already!
This review is from a person who hired this attorney.
Hired attorney

Irene is a highly experienced attorney with an expertise in family law. I have had the pleasure of working with her on many high conflict cases and was always impressed with how she zealously advocated for her clients. She is a skilled trial attorney whom I would strongly recommend.

This is the family court lawyer you need. Period.

If you need a lawyer for family courts issues Irene is the partner you need. I have a difficult ex-spouse and not a huge budget and Irene handled everything better than anyone could. I recommend her highly. Don't waste your time talking to other people who will promise you the world and deliver nothing and just keep racking up your bill.

I worked with Irene a few years ago and she exhibited stellar qualities as a trial attorney. Irene was totally prepared, confident, caring and professional. Since then, she has become a remarkable, seasoned, matrimonial attorney. Clients trust her and their trust is warranted. I am proud to call her a colleague and thankfully she raises the bar for other Family/Matrimonial attorneys.

Good experience through a difficult time

Helped me through a very difficult divorce... Always kept me informed, she got me a really good deal without costing me a fortune!
See all reviews

I endorse this lawyer. Irene Angelakis is a zealous advocate for her clients.

Irene Angelakis is a very smart, knowledgeable, talented attorney whose skills work to benefit her clients. She is a formidable adversary and works tirelessly to secure beneficial outcomes for her clients.

Irene is an excellent and very experienced attorney. I have worked with her on a complex matrimonial matter and her dedication to her clients as well as her in depth knowledge of family law make her stand out in our field. I would refer Irene Angelakis to anyone in need of top-notch representation in family law.

I do not know a more professional, proficient and compassionate advocate in the matrimonial/child custody field than Ms. Angelakis. She is my go-to attorney for any clients I have who need specialized help in such matters, and I endorse her whole-heartedly and without reservation.