Joe Scura is a criminal trial attorney with offices in Morristown and Orange, New Jersey.  He has been selected as a "Rising Star" in the area of New Jersey criminal defense by Super Lawyers Magazaine in 2015, 2016 and 2017.  Joe currently represents individuals charged with serious criminal matters throughout the State of New Jersey.  He also represents individuals and a variety of business entities regarding litigation and compliance matters.

Joe is a 2008 graduate of the American University, Washington College of Law, located in Washington DC.  After graduation, Joe served a one year appointment as judicial law clerk to the Honorable Ernest M. Caposela, a judge of the Superior Court of New Jersey.  He also worked for the New Jersey Office of the Public Defender before starting his own law firm in 2009. 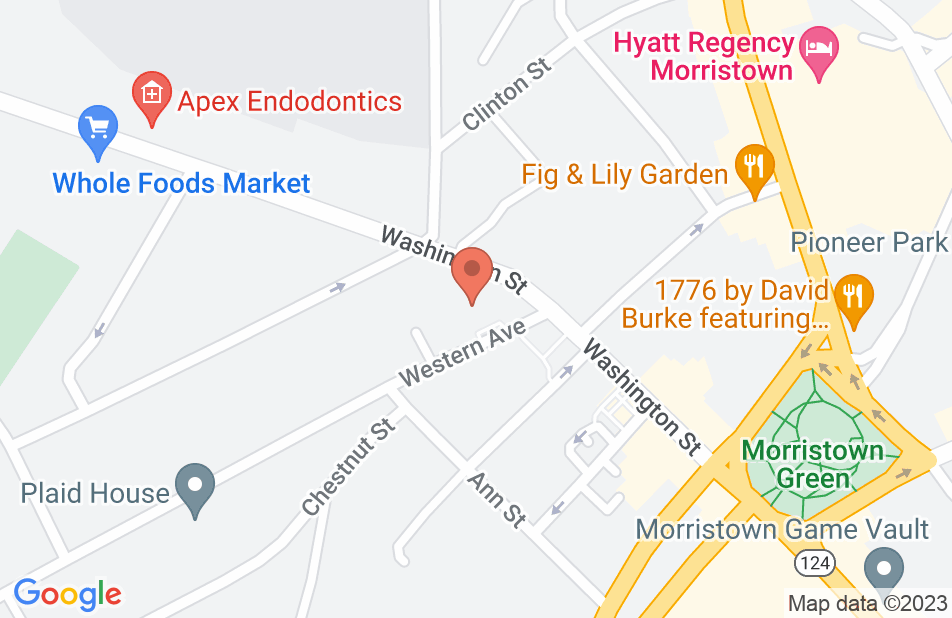 I couldn't recommend Joe Scura and his team more highly. Five stars is not enough. An extremely knowledgeable professional who follows up promptly and maintains contact. He patiently guided me through the legal system and worked tirelessly to turn a potentially serious situation into a dismissal without trial. I hope that there will never be another situation where I would need an attorney, but if so, I would call upon Joe's services without hesitation.
This review is from a person who hired this attorney.
Hired attorney

A highly experienced and honest attorney

I hired Joe to represent me in an unusual personal injury case. He is very knowledgeable of the law and communicated everything to me in great detail, including an explanation of all potential scenarios. This allowed us to chose the right strategies in each step of the case. He is patient and thinks through every detail before making a final decision. He was always upfront and honest in all our discussions. His is an excellent strategist, highly professional and easy to work with. The case ended in my favor thanks to Joe's excellent work.
This review is from a person who hired this attorney.
Hired attorney

Mr. Scura recently handled a court case for me that was very difficult for me to handle but he was able to relax me and handled the case with the upmost professionalism. He was able to reduce my court appearances and helped me to lower the charges.
This review is from a person who hired this attorney.
Hired attorney

Mr. Scura recently helped me with my driving violations case. I was facing multiple tickets and penalties as part of a complaint recorded by a Central NJ municipality. Feeling confused and stressed, I left a message with the Law Offices of Joseph S. Scura. Mr. Scura called me back that day from his vacation. I spoke with no less than 5 potential attorneys within the surrounding area of the municipality prior to discussing my case with Joe. Joe spent considerable time patiently taking my questions and providing honest feedback based on my initial verbal account and describing some corresponding options to me for moving forward, whether or not I elected to work with him, or if I went with a different advocate who may have been based closer geographically to the prosecuting municipality. That said, I was struck by Mr. Scura’s composed and intelligent demeanor, his clear command of legal knowledge for the matters that impacted my case as well as the transparent manner in which he was able to articulate it for me, and his overall appreciation and sensitivity to my position and the potential legal consequences I might have been facing. This was no less than a consumate professional, and I knew Mr. Scura was the right choice. It should be noted that at no time I felt any pressure or sales gimmicks. There was a total absence of either the borderline fear tactics or the over-promising of results that you sometimes run into if searching through an overwhelming list of Internet search results. After hiring the services of Joe Scura, I continued to be impressed and thankful for the A+ level of service I received throughout the process leading up to my court date. Mr. Scura and his offices handled everything, top to bottom. Being a neurotically detailed individual myself, I was grateful for how everything was being taken care of and how my calls were being responded to in a timely manner and that I was being kept in the loop throughout. Joe even called me back on a Sunday, and he did not have to do that. I think he appreciated and understood the personal angst this experience was privately causing me and was an exceptionally patient advocate who was effective at reiterating the benefits of adopting a stabilizing and grounded legal mindset, something I remain very thankful for personally. Mr. Scura identified and executed the path forward for my case early on and, as a result of his efforts, knowledge, skills and preparation, was able to achieve best-case success on my behalf come court time. Mr. Scura was able to enter a municipality within a geographical location I’m not sure his offices normally have cause to interact with and he engaged with the prosecutor over the course of some time in order to totally eliminate one serious ticket I was charged with and then also reduce another 4-point ticket to a zero-point offense with an accompanying fee. In my view, Mr. Scura demonstrated professional persistence and a sincere interest in advocating for the legal rights of his client. Mr. Scura then carefully explained to me the newly available options resulting from his dialogue with the prosecutor and wanted to ensure I understood the pro’s and con’s of each so that we had a consensus I felt good about prior to finalizing (once again, always taking care to prioritize the client’s well-being and best interests.) In the end, the results of my case were obviously exceptional. That said, they may have only been equaled by the quality of service which drove them. If you’re reading this and seeking legal advice, you will save time and thank yourself by reaching out to the Law Offices of Joseph S. Scura.
This review is from a person who hired this attorney.
Hired attorney

Mr. Scura is a superb lawyer who helped me through a very trying time in my life. His litigation expertise and court room etiquette, along with his very thorough work helped prove a very difficult case. I cannot express enough gratitude for all he did to help my family. He went above & beyond and treated me as he would a friend or family member. I would certainly recommend his services to anyone I know. You can be assured you're in good hands with Joseph S. Scura Esq. Thank you Joe!!!
This review is from a person who hired this attorney.
Hired attorney

Joseph S. Scura is a SUPREME PROFESSIONAL and EFFECTIVE ADVOCATE! He exemplifies the meaning of a lawyer. He combines expert knowledge of the law and personal compassion to achieve his clients’ ultimate goals. As an outstanding counselor he provides exemplary representation and is incredibly patient, reliable, competent, assertive and diligent. His expertise of the law, evidence rules, and court procedures is far superior than any other we have experienced. He has always been available to answer our questions and provide sound feedback via email and/or phone calls. We HIGHLY recommend him to anyone who is searching for a brilliant attorney.

Mr. Scura is a well versed attorney, whose professionalism and courtesy made me feel confident every step of the way! I would recommend him to anyone, without question!

I hired Joe Scura as my lawyer when I received (4) tickets, including a DUI in the mail from a night I do not remember. I met an acquaintance at a bar after work for happy hour on April 6, 2011, the next thing I remember is being woken up by a nurse in the hospital the next day. I had heard nothing but great things about Joe and after meeting with him, I knew he was the Lawyer for me. My case was mysterious as nobody knew what had happened that night. I was found on the side of a highway not in my car, people had called in that the driver had fled the scene. Joe Scura did absolutely everything he could for me, I really felt comfortable with him representing me. Joe Scura is both trustworthy and passionate about his work, never once did I feel let down or disappointed. I highly recommend Joe, as he fights as hard as he possibly can for justice to be made. Aside from his true talent when it comes to his career, Joe Scura is a noble individual, very kind-spirited and will always make sure his clients are comfortable. I cannot say it enough, if you are in trouble, contact Joe Scura, and you will immediately know what I am talking about!

Joseph Scura is an extraordinary and respected attorney deserved of praise. He is knowledgeable of the laws and how the courts work. He is detail and fact oriented. His patience with the legal system and in dealing with the public is admirable. He listens intently and exhaustively to the situation then provides reasonable legal options. He is able to explain both best and worst possible scenarios with sincere candor in an easy to understand way. Joseph Scura is thorough and his follow through is both remarkable and appreciated. In my experience Joseph Scura is rare, appreciated beyond words and definitely appraise worthy. His demeanor and professionalism provides a peace of mind that makes going through such sensitive and emotional situations dealable.

I contacted Joseph Scura in May of 2010 regarding a ticket for a suspended vehicle registration. This being my first time in need of legal advice I was quite nervous, yet Joe and his staff handled my case very professionally and responded to and alleviated all of my concerns very swiftly. After researching the penalites for my kind of case I was looking at some pretty severe fines. At court Joe was able to drastically reduce my fines which not only saved me lots of money, but also relieved the stress of wondering how I was going to be able to pay such hefty fees. If need be I will definitely be using Joe for any legal advice in the future and he will come highly recommended by myself for anyone I know in need of representation. Thanks again Joe for the great work!
See all reviews

Joe is a true professional and fearless advocate for his clients. I was Joe's adversary several times while I was a Morris County Assistant Prosecutor. Joe has a great grasp of the law and was a pleasure to deal with. I endorse this lawyer.

I initially met Joe while I was a Morris County Prosecutor. We have since crossed paths now that I am in private practice. From both of my vantage points, Joe is a tremendous criminal defense attorney; he is thoroughly prepared and undeterred from taking on "heavy" criminal matters -- yet, can also handle the more routine municipal court subjects.

Joe is an excellent advocate for his clients. He is well liked and well respected in the legal community. I strongly endorse this lawyer.

Joe is an intelligent hard-working attorney. He is devoted to his clients and treats them honestly while giving them the best chance at success.

Joe is a great attorney with a great respect for his clients. He is diligent about providing the best representation possible for each client he has and is always conscientious about his research.