Thank you for visiting my Avvo page. I've been litigating and trying complex civil cases for over 30 years, and I've enjoyed (almost) every one of them. In the "cases" section you can view a list of some of the cases I have handled. For more detailed information about my background and experience, or for a consultation, please feel free to contact me. 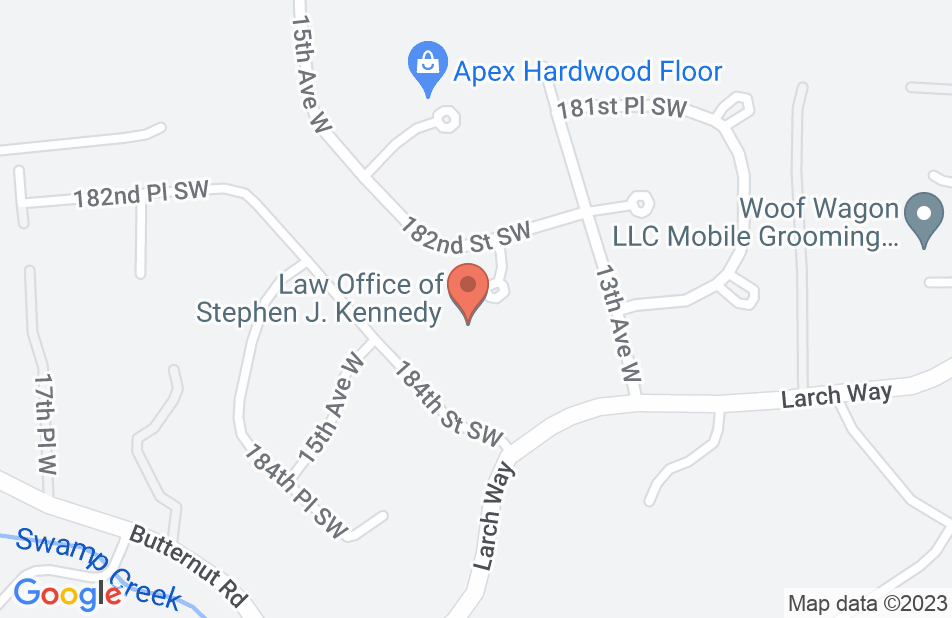 Steve is a fantastic, cost-effective lawyer!

I own an aircraft parts company. I hired Steve Kennedy a few years ago to assist my company with some contract disputes that we were having. Steve visited my office, met my employees, and learned my business quickly. He gave very clear explanations of my options, with the pros and cons of each. He always seemed to be thinking a few steps ahead of the other party to the dispute, and he was able to resolve the problems quickly and cost effectively, and in a very professional manner. Steve is now my "go-to" attorney. I recommend him very highly.
This review is from a person who hired this attorney.
Hired attorney

Stephen J kennedy is the best!

We were being bullied by another attorney, lucky for us we found Mr. Kennedy. He took the time to learn our business and our state contracts. He was always available for us and our concerns. In the end we couldn't have been happier with the results. Thank you again Mr. Kennedy! Rolly.
This review is from a person who hired this attorney.
Hired attorney

Steve was excellent. He provided me with amazing effort with resolving my case Thanks again
This review is from a person who hired this attorney.
Hired attorney

One of the best attorneys in the State of Washington

Steve Kennedy represented us in a complex real estate dispute involving the use of a common lot owned by more than 300 tenants in common (including us). Not only was it frightening for us to take on so many, but the scope of the case seemed unwieldy. Our biggest obstacle was figuring out how to get jurisdiction over such a large and diverse group. How does one co-tenant in common initiate a lawsuit against so many other co-tenants in common? The typical way would be to sue the community's board. However, the board was quick to point out that they didn't own the properties or represent the owners but merely managed the common lots. The other way would be to sue each co-tenant individually. But this would be prohibitively expensive because it would involve serving papers on each and every property owner -- some of whom lived out of state. We were in a quandary and we needed to act fast. Steve figured out a way, which we'll let him tell you about. But suffice to say, it involved a rarely-used procedural device that garnered the respect of the court for its elegance, efficiency and originality. In the end, Steve's brinksmanship saved the day for us and provided the settlement we needed. We would highly recommend Steve to be your counsel. If anyone deserves to be given the recognition of Super Lawyer, it is Steve Kennedy.

The best lawyer in Seattle: Trustworthy, Quick, and Effective!!!

I had a big trouble with the apartment rent contract. The manager of the apartment tried to take all my deposits and also write out some other silly fees that I have to purchase in order to cancel my apartment rent contract. Immediately, I contacted my friend and he suggested to me Mr. Stephen Kennedy. My friend also told me that Mr. Stephen is really trustworthy, fast and effective. My friend was right. Mr. Stephen solved my problem in just one day and he was able to help me cancel the rent contract without paying any additional fee. I also got my deposit back. I strongly recommend Mr. Stephen Kennedy to everyone who need a good lawyer!!!

Steve is a top notch litigator. He has a knack for finding the weaknesses in the opposing party's case and intelligently utilizing the strengths in his client's case to reach a favorable resolution.

Daniel Harris, Lawsuits and disputes Attorney on Jun 5, 2007
Relationship: Worked together on matter

Steve is a brilliant lawyer. I have referred a number of clients over to him and they have always been pleased.