I have a strong dislike for people or companies that take advantage of others, especially when they use deceptive practices, make frivolous claims and/or resort to strong arm tactics.  I enjoy aggressively representing the victims of such tactics, in their capacity of Plaintiff, Defendant, Cross-Complainant or Cross-Defendant, and not only winning for my client, but affecting an attitude adjustment in the other party. 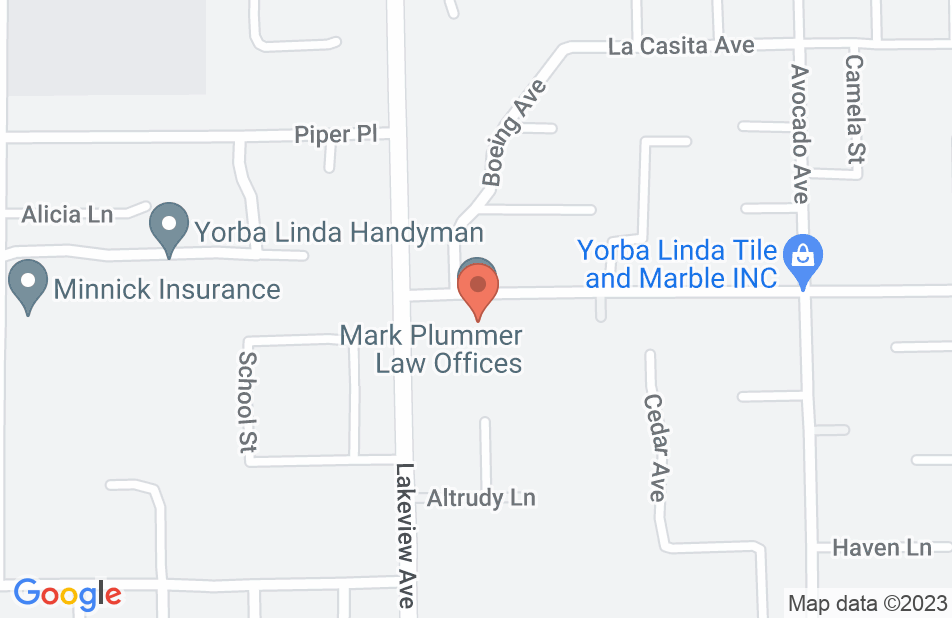 Attorney Mark Plummer and his team provided excellent representation for my complex Medical Malpractice case. Mr. Plummer's detailed knowledge and expertise in working though all the finite details was extremely important in our the outcome of my case. Mark and his legal assistant Cynthia always communicated with me throughout the entire process and were hands on from start to finish. My initial fears and concerns that came from having my independence, well-being, and financial security taken away from me was reversed immediately when Mr. Plummer fought diligently for me.
This review is from a person who hired this attorney.
Hired attorney

Mark has been a very good attorney for me , my case is not easy but Mark saw the wrong that was done to me. He is a fighter and ive been very happy with him
This review is from a person who hired this attorney.
Hired attorney

This attorney works alone and had no secretary. I think as a result he does miss a lot of details and has mistakes ( like other customer's names on my legal papers) did not even tell me he filed a case on my behalf and then did nothing after he filed it. Then he wanted upfront money from me even though he approached me and took my case on total contingency. I wish I never used him. I only found out he filed the case ( without telling me that he did) when the other side went to a hearing, won because no one showed up or filed a paper for me, and I never knew about any of it, so I lost. He is not honest and I would not use him again for anything.
This review is from a person who hired this attorney.
Hired attorney
Mark Plummer's response: This never happened. I never lost a motion by not showing up. This appears to be a campaign by a client that was rejected because they were unethical and I would not represent them. Not a single thing in this review is true.

The prior review posted about this attorney is pretty accurate. Mr. Plummer is an experienced attorney but he is very difficult to get a hold of. In addition, his court pleadings were sloppy with lack of attention to detail so he rarely won any motions, not because they lacked merit, but because he missed some mundane detail, like putting an incorrect serving address, or missing a required portions of a motion, etc. He essentially blamed the court, the judge, or the client every time for losing his motions instead of correcting his own mistakes. So the next time, the same or another mistake would happen. This type of practice is not acceptable especially when he gets paid for this work hourly! I would not recommend Mr. Plummer.
This review is from a person who hired this attorney.
Hired attorney
Mark Plummer's response: This never happened, rather these are false claims by a client who was dropped due to the unethical requests. It is too bad the vast majority of happy clients don't post reviews.

I endorse this lawyer. He handled to referrals I sent him regarding labor law issues.

I endorse this lawyer. Mark and I have worked on several cases together and he is a creative thinker, dedicated and extremely knowledgeable.