William J. Routsis II is licensed to practice law in both Nevada and California and has provided relentless representation to individuals charged with crimes for more than two decades. As a philanthropically motivated attorney with a sincere desire to protect the rights of underserved communities, Mr. Routsis has devoted much of his professional career to providing pro bono legal services to those overburdened by the unfair realities of the criminal justice system. Mr. Routsis is passionate about the pursuit of justice and handles each of his client’s cases with the utmost care and attention detail, and ensures that each client is provided the highest quality of representation possible.

During the previous twenty-five years Mr. Routsis has established an impeccable trial record highlighted by eight homicide trials resulting in zero guilty verdicts. In each of these cases Mr. Routsis genuinely believed that his client was innocent of the alleged offenses and worked tirelessly to gain that recognition from the jury. Mr. Routsis successfully defended his first murder trial in Bakersfield, California in the case State of California v. Teddy Wilson. At the time of this trial Bakersfield was dealing with a serious corruption problem in its forensic pathology department and the District Attorney’s office. Owing to the tenacious efforts of Mr. Routsis, Teddy Wilson was granted an acquittal by the judge before the jury could deliberate. After the defense closed its case, concluding a two week jury trial, Mr. Routsis made a unique request under California law asking the judge to direct a verdict of acquittal. The standard of review necessary to remove a case from the jury after a trial is a “finding that no reasonable juror could find the Defendant guilty beyond a reasonable doubt.” Any attorney or judge would tell you that this is essentially unheard of following a heated homicide trial. Nonetheless, pursuant to order from the Superior Court Judge, Mr. Wilson was acquitted and freed by a directed verdict after a full trial.. (Please read further about this unique case in the “Featured Cases” section of this website which includes a newspaper article about this case.)

William Routsis grew up in the Lake Tahoe area and attended high school at Incline High School before attending college at the University of Nevada, Reno. After completing his undergraduate studies he enrolled in the McGeorge School of Law in Sacramento, California, and concluded his legal studies as one of the top two students in the field of constitutional law. When he is not working on his clients cases Mr. Routsis enjoys exercising and participating in outdoor activities such as hiking, kayaking, swimming and playing tennis. During his undergraduate studies at the University of Nevada, Mr. Routsis earned the title of Collegiate National Light Heavyweight Boxing Champion twice, and spent time training professionally. 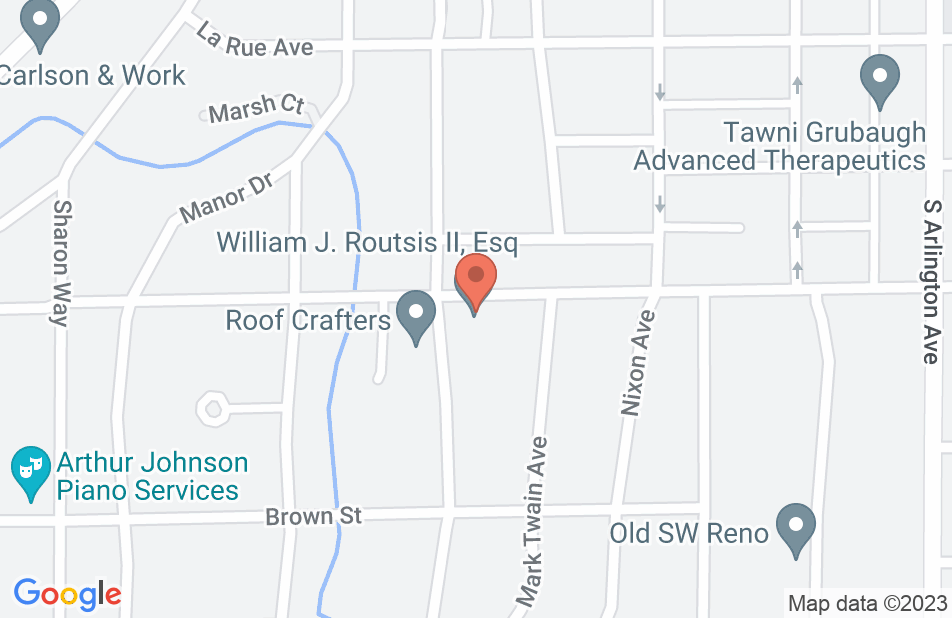 No doubt best lawyer, won our case because of his knowledge and trusted relationships

William Routsis II knows the system inside and out, he's built trusted relationships over the years within the justice arena. His professionalism and determination brought this case to a close and we won our case. He is also very compassionate, very helping during times like these.
This review is from a person who hired this attorney.
Hired attorney

Mr. Roustis was very helpful in getting the result we wanted for my misdemeanor. The prosecutor wanted a ridiculous sentence for my crime and Mr. Roustis stood by my side and challenged them all the way to the end, he'd did not budge and was willing to take them to trial. Mr. Roustis's persistence and expertise we were able to come up with a great plea deal that I am very happy with. I high recommend Mr. Roustis for any one that needs a lawyer that is no non sense and committed to getting the result you want.
This review is from a person who hired this attorney.
Hired attorney

I was recommended to hire William Routsis by another friend and I was very glad I did, he was able to get the case dropped. He is a straight forward man and instilled confidence in me that due to the cases circumstances everything would be ok and it all went great. I do recommend him.
This review is from a person who hired this attorney.
Hired attorney

William Routsis has to be the best lawyer my family hired for my brothers case. William is dedicated to his job and most of all his clients. He straight forward and likes the job done right the first time. I will forever be thankful to him for all he has done for my family and all the hard work him and his assistant has put in for us. He is the guy to go to for any criminal case.
This review is from a person who hired this attorney.
Hired attorney

Fabulous lawyer and ur best choice!!! Hands down

Have hired him 3 times and won every time...straight forward about what he can do for u...then follows thru...he hasnt let me down on anything...absolutely should be everyones first choice!!! Hes a man of his word!!! :)
This review is from a person who hired this attorney.
Hired attorney

I would recommend Mr. Routsis!!! He did a fabulous job getting my case dropped down to a minimal, he will fight for you. With more than fair prices. Couldnt done it without ya, so happy with the outcome!! Thanks soo much!!
This review is from a person who hired this attorney.
Hired attorney

I fully recommand William Routsis as a defense Attorney, he helped us get through a dificult case. he is the most honest Attorney we have ever met, we thank him greatly for all his help and dedication!
This review is from a person who hired this attorney.
Hired attorney

I endorse this lawyer. William is an incredible advocate for his clients.

William is an excellent lawyer. I am always impressed by the way he represents his clients. He is professional and kind. He cares about his clients. If you pick William as your defense attorney, you will not be disappointed! He will exceed your expectations.