Former prosecutor and government attorney in private practice. My experience provides a tailored and innovative stretegy unique for each client. 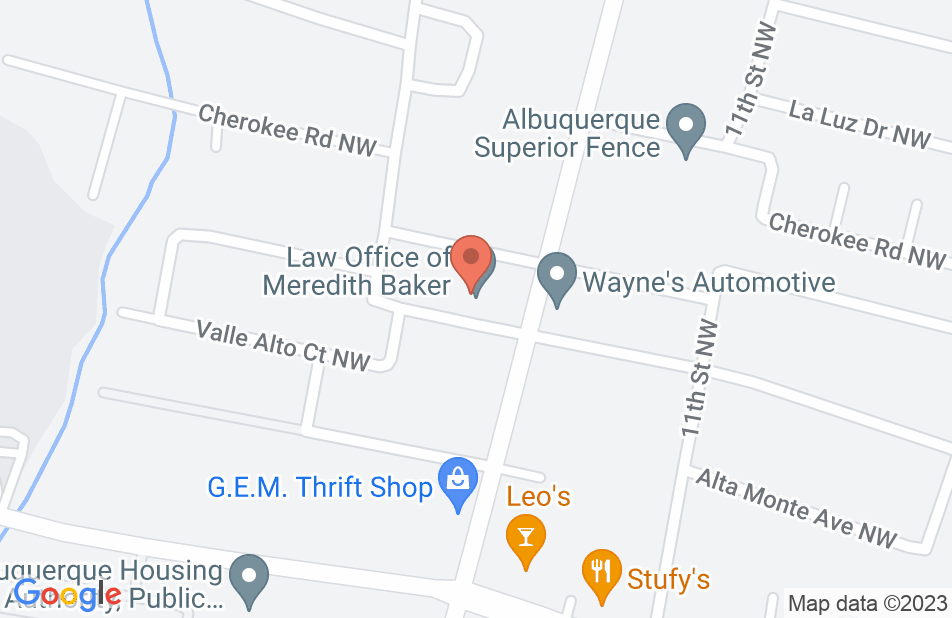 I hired Ms Baker after my former boyfriend became threatening. She was very supportive and kept me strong through out the process. Her confidence was inspirational.
This review is from a potential client who consulted with this attorney.
Consulted attorney

Tough, experienced, sense of humor, would definitely hire her again

I have utilized Meredith Baker’s legal services as her client for both child support arbitration, and later, separately, twice as her client for business legal assistance. I hired Ms. Baker for child support mediation and arbitration, which was resolved in court in December 2016, and then later, I retained her as my advocate for a business contract dispute in Fall 2018, and again, in early 2019, to write my future business contracts to protect me better legally in my work as a consultant in private industry. I found Ms. Baker to be fair and tough in family law court proceedings. She prepared me in advance for various tacks of questioning that the opposing lawyer might take during my child support hearing. I felt confident and protected, and we were able to reach satisfactory resolution with the opposing party. As my legal advocate and buttress of defense, Ms. Baker absolutely focused for me as her client; she moved forward calmly through disputes which were of high emotions. Ms. Baker is also experienced in business law, and was able to retrieve payment for me from a foreign company with which I had a signed contract for cash and stock. After a board takeover, this foreign company refused to make my final payments due per contract after receiving my completed work, until I retained Ms. Baker for legal assistance in this matter as her client. Ms. Baker has an acute sense of justice, and also, has always held true to my wishes as her client. I will definitely retain her again to resolve any dispute I may have which requires mediation or arbitration within the realms of family law and business law.
This review is from a person who hired this attorney.
Hired attorney

A very understanding and funny lawyer!

If you're considering Meredith Baker as your legal counsel, you better choose her! She is someone whose judgement you can trust. Meredith helped me with a legal issue that I had. She was nothing but warm and welcoming, even with a case like mine. She is a great communicator: always made sure to hear and understand everything I had to say about my case, explained legal nuances to me that I had no clue about, and did everything she could to communicate with all of the parties involved in my legal matter. She went out of her way to be my legal counsel and to help me. And it all worked out exactly as she said it would!
This review is from a person who hired this attorney.
Hired attorney

If you are needing legal advice and aid Meredith and her team will give you everything you need and peace of mind. You can assure yourself you are in good hands with a knowledgeable woman who will work hard any day of the week to make sure you are satisfied. I cant thank you and your team enough for the amount of work, time and peace of mind you have given me, you have truly changed my life and its just the beginning. I cant tell anyone enough that they need Meredith in their life to get them through their situation, she is tough, smart & courageous. She will guide you, teach you and always help you. You are a true angel with wings Meredith.
This review is from a person who hired this attorney.
Hired attorney

As someone who works in the legal community, and as Meredith's client, I can say with confidence that Meredith is the full package family law attorney. She is knowledgable, ethical and explains the process fully. I felt comfortable that I had the very best guide through my divorce. Meredith listened to me and encouraged my input. I strongly recommend her.
This review is from a person who hired this attorney.
Hired attorney

Meredith was EXTREMELY rude over the phone. We spoke for just 15 minutes and though she sounded objective, she showed ZERO empathy and understanding. She did not hear the entirety of the case or ask clarifying questions before making a judgement of who she thought I was as a parent or what “personality category” I fit in. I would STRONGLY discourage fathers who have experienced parental alienation to choose Meredith as representation. She was discouraging, conversationally over powering, judgmental, and showed true loyalty to the broken family court system. Though I didn’t even consider retaining Meredith, talking to her truly made me sick to my stomach!
This review is from a potential client who consulted with this attorney.
Consulted attorney
Meredith Baker's response: I don't think I ever spoke with this person. They are not listed as a person who scheduled a consultation with me.

I endorse this lawyer. Ms Baker and I represent respondent parents in child abuse and neglect cases filed by New Mexico's child protection agency. I have found her to be knowledgeable about this somewhat arcane area of the law, always prepared and quite competent in her presentations to the Court. She also has a sense of humor.