Many people who have a legal need are turned off by the way things are done in our legal system.  I try to make things just a little easier by:

My practice is built around owners of small businesses (usually less than 100 employees) and other smaller clients.  I can give you the number of clients who can talk about their good experiences with our firm.

In more than 20 years of practice, Brad has represented businesses and individuals in many different areas.

Helping Small Businesses. Brad spends a lot of time working with small business owners. He has developed expertise in the areas of law that are important to small businesses. He helps business owners decide the structure of their businesses, whether corporations, partnerships, limited liability companies (LLCs), or something else. Businesses often have legal issues related to their employees, and so Brad has developed expertise in that area. And because legal disputes can happen, Brad can help his business clients prosecute and defend lawsuits. Brad’s clients turn to him for litigation as well as commercial matters.

Litigation. Brad has represented clients at every level in Arizona—everything from head counsel in multi-week jury trials in Superior Court to appellate counsel at the Arizona Supreme Court. Brad has also represented clients before Justice Courts, administrative tribunals such as the Office of Administrative Hearings, and many arbitrations and mediations. Brad has even served as a private arbitrator, where he has ruled on lawsuits brought by other lawyers.

Franchising Law. Brad helps clients who are involved in franchising—whether as franchisors or franchisees. Brad helps clients with the complicated process of drafting the franchise disclosure documents that are required by federal law, as well as registering under the franchise and business opportunity laws of various states. For many years he has been a member of the Franchise Forum of the American Bar Association.

For years, Brad has had the highest possible rating of “AV” at Martindale-Hubbell. This type of rating is gained by only about 10% of lawyers, and it is a distinction that can only be granted by ratings from experienced lawyers. It’s not a ranking that can be purchased or a system that can be “gamed.”

Brad’s Education and History as a Lawyer

Brad began his practice working for several years at two large firms in downtown Phoenix: Jennings, Strouss & Salmon, PLC and Bryan Cave LLP. In 1998 he began his own law office in the East Valley with nothing but a cell phone, and his practice has grown consistently since then.

Brad represents clients from all over the United States. His clients literally hail from California to New York, from Georgia to Alaska, and many places in between. He represents numerous out-of-state clients who have business interests or litigation matters in Arizona. Brad also acts on behalf of clients in foreign countries (recently Mexico, France, Canada and Japan) who have legal or business interests in the U.S.
Brad has traveled the globe, both for business and humanitarian reasons. His service began early in life, when he spent two years in Japan as a volunteer missionary. Since then, he and his family members have volunteered in the developing world many times, including: 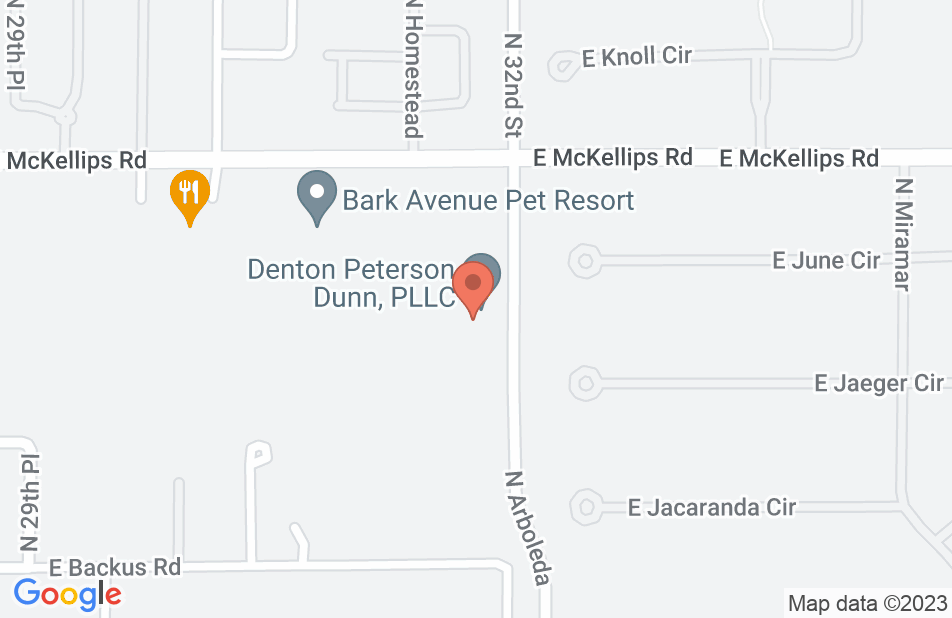 During the course of my lawsuit, Brad Denton was always professional & in control of every situation in knowing the law. He was outstanding - I would highly recommend Brad Denton & his law firm.
This review is from a person who hired this attorney.
Hired attorney

Brad Denton was instrumental in working with my former employer to negotiate on my behalf for a much improved severance agreement. Throughout this process he always had my best interest at heart. He kept me well informed and provided prompt and respectful service. He was sincere in the way he handled my case. He was sensitive to the fact that this was a very stressful life event and was able to counsel me on which options to pursue. From my initial phone call and meeting in his office, I must say his entire staff was professional, respectful and kind. They are all very personable and each one every bit a perfectionist. I'm sure they have hundreds of cases but I certainly felt like they were only handling mine! I appreciate their attention but most of all in this day in age, I appreciate the honesty and integrity with which they conduct their business. It's so refreshing.
See all reviews

I have known Brad as an attorney for over 16 years. He is a highly competent, skillful and effective attorney. I recommend Brad for business, litigation and franchising matters.

I endorse this lawyer's work. I have referred several clients to Mr. Denton for litigation services and every single client has let me know that they were very satisfied with Mr. Denton's services and rates. Mr. Denton is well qualified and experienced in corporate litigation matters.

Brad is a talented and knowledgable lawyer in many fields. Many of my clients use Brad for corporate and other business and employment law services in addition to Franchising. I highly recommend this attorney.

I endorse this lawyer's work. I have known Mr. Denton for over 12 years, and have confidently referred clients to him for legal services. He is a highly skilled and ethical attorney.