Mr. Baker focuses his practice on Criminal and Family Law.  To that end, Mr. Baker and his firm have successfully represented thousands of clients over many years all over Arizona.  In addition to his legal accomplishments, Mr. Baker is a year round youth athletics coach, a volunteer for Big Brothers/Big Sisters of Arizona, and a member volunteer at Central United Methodist Church in Phoenix, Arizona.

The Baker Law Firm, LLC opened in November, 2005 with the sole purpose of providing affordable highly competent legal representation in Criminal and Family Law. Mr. Baker and his team treat each client's case an opportunity to serve others during a difficult time in their lives. 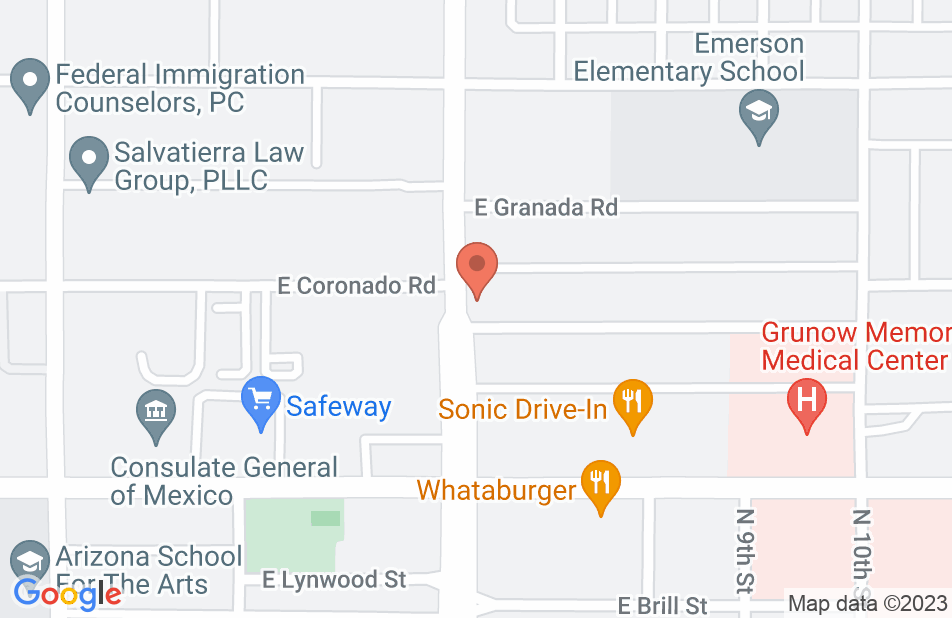 From the initial contact Mr Baker made me feel like my case was important to him. He's professional, compassionate, and knowledgeable. I highly recommend him.
This review is from a person who hired this attorney.
Hired attorney

I hired Michael for a matter and he promised me to do his best and I know he did - all charges against me were dismissed
This review is from a person who hired this attorney.
Hired attorney

+ve: After reading the reviews on avvo, I reached out to The Baker Law Firm on 05/28/2020 at around noon for a protective order hearing that was coming up fast on 06/02/2020. Michael Baker called me back in just 4.5 hours later on the same day. He was knowledgeable, eloquent, and just an overall excellent professional on the phone. I was very impressed and hired him the next morning! In the days leading to the hearing Michael was consistent with his promises of phone calls and email replies to me. Today he reached the Gilbert Municipal court exactly on time and in just two hours he won the case for me! It was a piece of cake for him. I strongly recommend him! -ve: The only negative I can think of after pondering for an hour is that one of her office staff misspelled my last name. I do not blame her because my last name is not even close to be an all American name :) Note: This is my very first review on avvo. So, please reach out to me if you want to confirm my existence (real person) living in Gilbert, AZ with a real case and a win in the Gilbert courthouse. Thank you Michael for everything you did for me. May Allah bless you and your family! May you prosper.
This review is from a person who hired this attorney.
Hired attorney

Michael Baker was able to convince the prosecutor to allow me to take the diversion tasc program instead of being charged with 3+ felonies at a young age. His legal advice truly saved my future and can help save yours as long as you remain in communication with him. The only problem I ever experienced was a couple day wait on a few questions, however, I had not been fully communicative with baker initially, so i am mostly if not all to blame. Otherwise an outstanding and professional lawyer willing to be as aggressive with your case as nescesarry, I would recommend anyone facing criminal charges to contact michael baker or the baker law firm.
This review is from a person who hired this attorney.
Hired attorney

Months into a serious criminal case, I realized I needed an attorney with more experience; who was more aggressive than the lawyer I had initially hired. Michael S. Baker stepped in and immediately instilled a sense of confidence that was sorely needed. I've been treated with respect and professionalism by the entire staff and Michael has gone that extra mile, showing a compassion and commitment that was truly unexpected. All charges were dismissed and words cannot express my gratitude. I would not hesitate to recommend The Baker Law Firm to anyone needing legal assistance.
This review is from a person who hired this attorney.
Hired attorney

Mr. Baker patiently, professionally, dutifully guided me through a horrible divorce. He & his team ameliorated the ugly, stressful situation. He advised me as to my options, explained the potential outcomes (positive & negative), & explained the workings of family law and its court proceedings. He truly made a nasty situation relatively tolerable. He is Truly an asset to his profession !
This review is from a person who hired this attorney.
Hired attorney

Mr. Baker is a great lawyer, he helped my family and I during a tough time. The friendly staff at his law firm made us feel welcomed. In the beginning, when first hired, Mr. Baker rushed down to the county jail to speak with me, even after his office hours. He always maintained a positive attitude and never once made me worry about the case. He also maintains contact with you throughout the entire case, sending email updates and scheduling meetings and phone calls.Thanks to Michael S. Baker and his law firm I'm not in prison or jail but, only serving probation. He has my everlasting gratitude and I am so graciously thankful for his help. And I will be sure to contact Mr. Baker once my probation term is over to help with expungement.
This review is from a person who hired this attorney.
Hired attorney

Michael helped me tremendously with two criminal cases in AZ, while I was living in MA. He came highly recommended from friend of a friend and out of application of his help and service to myself I would like to pass on this recommendation to all in need. He worked me as if family and resolved all issues. It was a great experience. Ty again Michael
This review is from a person who hired this attorney.
Hired attorney

I am so glad we called Michael baker to help with our case. He was amazing with letting us know what was going on with our case and the price was right.
This review is from a person who hired this attorney.
Hired attorney

Mr. Baker was incredibly helpful and quick. When we spoke over the phone he already seemed like he was preparing a plan to fight for my case even before I hired him. He ended up getting my case dismissed before the court date was scheduled and I can't thank him enough!
This review is from a person who hired this attorney.
Hired attorney
See all reviews

Michael is effective and professional. He is as knowledgeable as anyone in this field. I highly recommend him.

I have had the pleasure of working on a case with Mr. Baker. He is an excellent lawyer. He has the experience and knowledge necessary to do the job and do it well.

Michael is an excellent and well respected attorney in our community. He works hard for his clients in every case. You'd be well served with him on your side.

I've known Mike Baker for quite some time now, and he is an excellent attorney. I have always found him to be honest, a diligent worker, and extremely intelligent. I heartily endorse this lawyer in all practice areas.

Michael Baker is a knowledgeable and experienced attorney who fights hard for his clients. I endorse this lawyer.

Michael is a consummate professional who has an unassailable command of the law, is thoughtful, and always looks out for his clients' best interests and goals. I would not hesitate to recommend a client to his office for any criminal defense or family law case.

Michael Baker is a superior litigator with unmatched passion for bringing the truth to the top as he shields his client's with the Constitution! I endorse this lawyer, who is your light in the criminal world.

Mr. Baker is a diligent and aggressive attorney who truly cares for his clients and gets results. He is an amazing advocate, and I gladly endorse him.

Michael works hard for his clients.

Michael is a client-service oriented attorney, which is rare in this business. He is responsive, professional, and ethical. Clients are lucky to have him.

I endorse this lawyer. Michael is an extremely gifted litigator and provides excellent services for his clients.

I referred a mutual client who wanted to get a change of custody of his children. The client had nothing but good things to say about Mike. Mike successfully obtained a favorable parenting time arrangement for the client.