Representing Good People in Difficult Times. My husband, Joe Maher and I work for you!

Outside of the law firm, I am wife and mother.  Wife to Joe Maher who is also my business partner - that makes for some interesting dinner discussions!  Also, a mother to two young boys.  In my spare time I love to play the piano and go hiking with my yellow labrador, Abe.  I love living in Colorado. I went to high school in Colorado Springs then moved away for college and law school.  But was my goal was always to get back to Colorado Springs. In 2011, I moved back and am hoping to retire here (many, many years from now).  I love the Pikes Peak region! 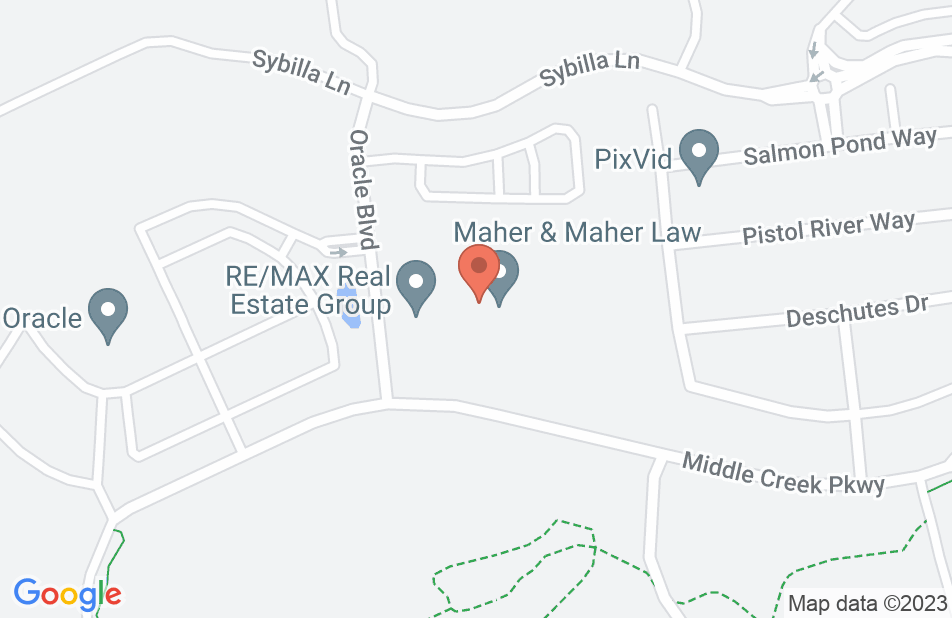 Hiring the Maher and Maher legal squad is hands down the best decision we have ever made. Very tragically, our daughter was killed in a birth injury accident at birth. Six months after she died, we got into a fight where the cops got involved and a case was made against my husband for domestic violence. The charges were very severe and were never what I wanted as the alleged victim. For months and months, I tried to get in touch with the DA, pleading with them to hear my voice and understand our grievous situation; but, they kept trying to push the narrative that I was just a recanting witness. The Mahers understood that our case was much more complicated than that, and they went ABOVE AND BEYOND to get the case dismissed before trial. This saved us so much heartache and trauma during what was already the most devastating season of our life. We had originally hired an attorney that kept over promising and under delivering. The DA was relentless in pushing this case forward, despite the first attorney’s efforts. That is when we made the very wise decision to hire Joe and Kimberly. From there, our luck completely turned around. Not only did the DA decide to start listening to me, but it seems they might have been afraid—or simply intimidated—to go up against the Mahers in trial. Being former prosecutors, they understand very well how the “other side” operates. For every meeting, they were impressively prepared, and I truly believe the DA knew the state simply didn’t stand a chance against this powerful husband and wife team. After Joe and Kimberly reviewed the discovery file, they started to find the inconsistencies in the case, and were very confident that they could win, communicating with us and the DA every step of the way. This confidence however, never led to a lack of preparation. Their creative, intelligent, and thorough approach is unmatched in the industry. Putting our faith in them was absolutely the right choice. If you find yourself in a terrible legal situation, trust me, you want Kimberly and Joe Maher on your side.
This review is from a person who hired this attorney.
Hired attorney

Kim showed professionalism, honesty, and Integrity. I felt like I received justice and I refer this firm to my friends. Kim & Joe are the best, and they will go the extra mile and fight until the end. Call them for all your legal needs.
This review is from a person who hired this attorney.
Hired attorney

Kimberly Maher gave a glimmer of hope to me at a time when my options were limited and the likelihood of a decent resolution seemed impossible. Without hesitation she took on my extremely difficult case and not only was I represented better than I could have imagined, I knew she was the right attorney for me the moment that I met her. Kimberly Maher is knowledgeable, professional, prompt, very compassionate, aggressive, and she has accurate judgement. The entire Maher and Maher team were available to me and my family on a daily basis and responded back to my questions and concerns promptly. Her cost is competitive with other firms, and she does excellent work. Kimberly Maher worked diligently to get me the best possible resolution. She’s the reason I am able to live a happy life again. I firmly believe I would not have received the kind of results that I did with any other law firm. My nerves were always calmed, my doubts were reassured, and the process was always explained. Honesty. Integrity. Transparency. Partnership. With Maher and Maher law, I got this and so much more. I'm always treated like first class and like I am family. I'm ecstatic to say that I was so pleased with Kimberly Maher’s services on my criminal case that I decided to hire her again for my civil case as well. I had little to no hope for my civil case but with her hard work and dedication I received what I was hoping for. I'm over the moon with the outcome in both of my cases and I can't possibly say enough great things about this law firm. My family and I are eternally grateful to Joe Maher, Kimberly Maher, and their team.
This review is from a person who hired this attorney.
Hired attorney

This should be your attorney

Joe and Kimberly have handled all cases, civil and criminal, for me. They are both extremely well-versed in the law and dedicated to getting the best outcome for you. The professionalism they emanate does not overshadow their true compassion when helping the underdog. I was that underdog... If it was not for their hard work, I would not have received the outstanding deal that I did in my criminal case, and I certainly would not have had the opportunity to bring my daughter back home in such a speedy and deserving fashion with my civil case. Words cannot thank them enough for what they have done for me! My daughter is my world... Through their knowledge and expertise, I was able to hold her again. Thank you!
This review is from a person who hired this attorney.
Hired attorney

Kimberly Maher was the undeniable difference to achieving a positive outcome in my case and I couldn't have chosen a better lawyer to represent me. Her exceptional knowledge of the law, ability to simplify things and unwavering support, kept me believing in a brighter future ahead. Her empathy and friendship thru this difficult time will always be cherished and I consider myself extremely fortunate to have received her council.
This review is from a person who hired this attorney.
Hired attorney

I hired Joe & Kimberly for a family member Most big law firms would have made him take a plea offer because it is fast and easy money for them; this would have essentially ruined his military career. Joe and Kimberly relentlessly fought for him. found law to defend him and the case was dismissed. You will not get this kind of team work, compassion and perseverance with any other attorney or firm. I highly recommend them. Joe and Kimberly treated him with an enormous amount of respect from the very beginning to the end. They explained everything in detail. Joe's court room skills in front of the prosecution and Judge were top-notch. He was well prepared and predicted everything and I mean everything the prosecution, police and this conglomerate's 'expert witness' were going to thrown at my friend. Thanks to you both and may God bless you always!
This review is from a person who hired this attorney.
Hired attorney

We hired Kimberly to defend a family member of ours. She really put forth an amazing amount of effory on our case. She kept us informed during the process, and was always supportive. Kimberly is extreemly knowledgeable went above and beyond our expectations delivering amazing service, professionalism, and compassion for our family.  Kimberly is of the highest caliber and I strongly recommend her and her team.
This review is from a person who hired this attorney.
Hired attorney

Kim is a strong advocate that fights for her clients. She gets efficient results and is well respected in the legal community. I endorse her and her firm.

Joseph Maher, DUI and DWI Attorney on Jun 19, 2017
Relationship: Worked together on matter