Attorney George A. Scharmen has been practicing law since 1973, giving him 40 years of legal experience in the criminal field. Up until 1990, he assisted with all kinds of cases, but since then he has dedicated his firm solely to helping those who are facing drunk driving charges. Having prepared numerous cases, appeals, and appeared in many U.S. Supreme Court and U.S. Court of Appeals for the Eleventh Circuit situations, he has gathered invaluable work skills. In 1992, he attained Board Certification as a Criminal Law Specialist and in 1993 he went on to become a Board Certified Criminal Trial Advocate for the National Board of Trail Advocacy. Joining forces with other lawyers that were as passionate as he was about defending client rights and pursuing justice, he helped to found the National College for DUI Defense, which was the reason why he began to focus his firm on purely DWI/DUI cases.

In addition to all of this, he also was the founding president for the San Antonio Criminal Defense Lawyers Association and has since then served as both a member and director of the Texas Criminal Defense Lawyers Association for the past 25 years. His work has been instrumental in shaping the way that DWI cases are prosecuted and he is working to pass a motion that suppresses blood searches in local San Antonio bars. It is his drive and determination, as seen in these outstanding achievements that reveal why he is able to obtain such positive case results.

Attorney Scharmen has been ranked as a 10.0 Superb rated lawyer on Avvo, which is the very highest ranking possible. Additionally, he has had the honor of being included in the list of Texas Super Lawyers® Rising StarsSM from 2003-2012, which is a full 10 consecutive years. No other DWI lawyer in all of San Antonio can make this claim. The National Trial Lawyers Association has named him in their list of the Top 100 Lawyers and he has been called one of The Best Lawyers in America® for the category of DWI/DUI from 2007-2013. Contact him for reliable and aggressive legal representation at a time when you need it most! 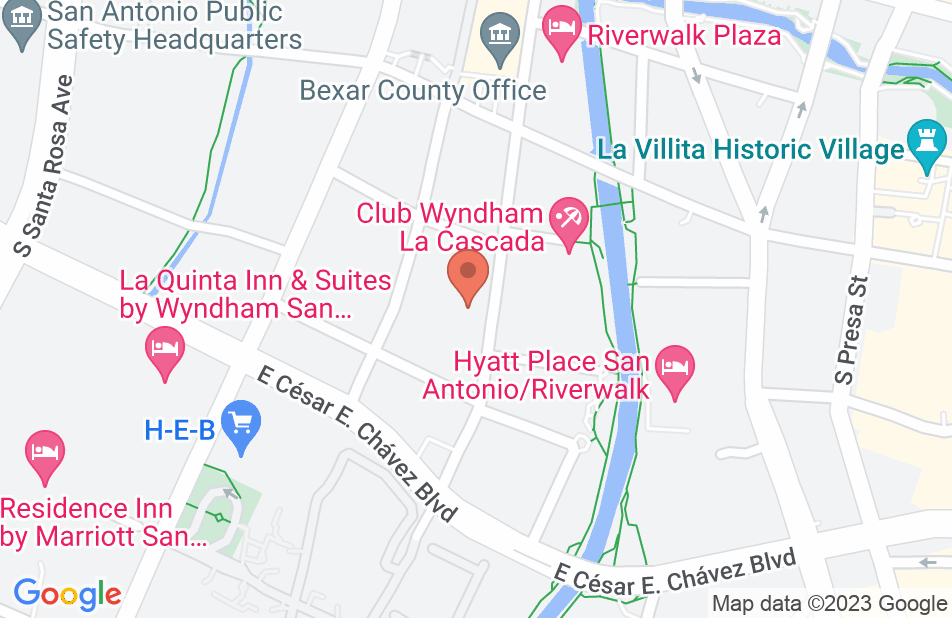 The Law Offices Of George A. Scharmen

I retained the Law Offices of George Scharmen to handle my case & I was very impressed by his law firm & the time they spent on my case. He was able to get my case dismissed!! I highly recommend this law firm.
This review is from a person who hired this attorney.
Hired attorney

I was George Scharnen's paralegal for ten years before I had a baby in 2011. He is a well known lawyer throughout the United States and Texas. It was a pleasure working for such a top notch lawyer. Mr. Scharmen would never guarantee a result. It's unethical and he simply wouldn't do that. I know that from working for him for a decade. Mr. Scharmen or any lawyer for that fact is not "two hours" late for court. YOU must be in court at a certain time to avoid a warrant for YOUR arrest. Each lawyer goes to courts such as Federal or felony courts first and will get to you and your court as soon as they can. On any given day there is a courtroom full of people waiting for their lawyer. This is just the way it goes in an overcrowded court room. Yes, if you are arrested for DWI you will be in a court waiting. The judges' run the courtrooms not the lawyers and that's what they require. Mr. Scharmen knows about every case in his case load. If you ask him something specific will he know every detail? No. But he will know every aspect and more at the time of trial. Mr. Scharmen is one of the best DWI lawyers anyone could retain. Don't listen to silly little complaints. Look at the big picture and his track record and appellate record is exceptional.
This review is from a person who hired this attorney.
Hired attorney

Getting my first DWI was terrifying! Thankfully, George was able to calm my nerves & make the process as smooth as possible. I don't think I could have made it through with any other lawyer. His competence & caring nature made it all a breeze.
This review is from a person who hired this attorney.
Hired attorney

Mr. Scharmen has done a few cases for my family. I would highly recommend him. On all cases we came out winners. He is very professional and knows how to get the job done. Call Mr. Scharmen if you are ever in a corner and don't know what to do. He has the right solution.
This review is from a person who hired this attorney.
Hired attorney

George Scharmen has been a blessing in my life

I am very thankful to my former employer for referring me to Mr. Scharmen. He was able to help me in my legal situation and because of that, I have referred him to all of my friends that have found themselves in similar situations. When we went to court, I sat in the bench, waiting. I had my eyes closed because I was praying for a positive outcome. I felt someone put their hand on my shoulder. I looked up and an attorney who had been in the courtroom when we walked in asked me, "You came in with George, didn't you?" I said, "Yes, sir." He said, "You don't have anything to worry about. He's the best." That day, my case was dismissed!!! I will always refer Mr. Scharmen because he treats you with respect and does absolutely everything within his abilities to help your case. In one of my meetings with him, I remember him saying, "Let's get this taken care of so that you can work on improving yourself and taking care of yourself." That was the moment at which I knew that he didn't see me just as a client, but as an individual and I knew that he truly cared about me. I continue to refer him to anybody and everybody that I can. I will always be so thankful for him and all of his help. Also, I appreciate his office staff that do everything they can to help you and keep you informed of all proceedings. Elsa, his assistant, is wonderful and is always willing to lend an attentive ear and more importantly than that, a word of encouragement. These are the things that people need from their attorney's office, especially when things might insurmountable. Thank you, Mr. Scharmen. You and your staff are the best!
This review is from a person who hired this attorney.
Hired attorney

I recently was referred to George Scharmen from a friend who had George represent him on a similar DWI charge, as I had now faced. I was a nervous wreck and had no idea where to even begin. On my first meeting with George, I instantly knew I had made the right choice as well. George informed me of the complete process that would occur, and all of the possible outcomes that I could be faced with. George was very professional, and very informative every step of the way. He also kept me up to date and informed every step of the way, which helps with such a difficult time.. I highy recommend him.
This review is from a person who hired this attorney.
Hired attorney

I hired Mr. Scharmen after a second citation. He was professional and explained my options well. The court date had to be moved a few times (due to a backlog of cases) and that was stressful, but he stayed in communication and walked me through the process. I felt confident in him and relieved to have found someone to rely on during this difficult time. I had a good outcome and highly recommend Mr. Scharmen to my friends.
This review is from a person who hired this attorney.
Hired attorney

I had never been "in trouble". I don't just mean with the law, I mean ever. As a kid in school I was always a "good kid." When I got pulled over for speeding I was already terrified. I obviously knew that I had a couple of drinks at dinner, but didn't think much of it, I didn't feel drunk. When the police officer asked me if I'd been drinking I replied honestly, and was shocked when he told me I was over the legal limit. Thankfully, I wasn't alone in this and had a good friend recommend George Scharmen to me. I will always be grateful to my friend, and to George. George was not only professional, but I truly felt that he understood me and where I was coming from. He always spoke clearly and never gave me "false hope," in what laid ahead for me. He made me feel safe, and not like I was a horrible person for getting arrested. I would recommend George to anyone who is ever in the situation that I was.
This review is from a person who hired this attorney.
Hired attorney

Mr. Scharmen delivered as he said he would. I was very pleased with the outcome of my case. I will admit, I was hesitant at first, but quickly felt at ease after speaking with him. Best decision I have made.
This review is from a person who hired this attorney.
Hired attorney

The best for DUI

No one knows the law better. George goes above and beyond to defend his clients and educate along the way. In this hard time, having someone competent and caring makes the process bearable. I couldn't have asked for more.
This review is from a person who hired this attorney.
Hired attorney

I endorse this lawyer. George is a leading attorney in the field. His ability and knowledge are beyond question.

I can highly recommend George Scharmen as an amazing attorney and just all around great guy. He's been practicing law for over three decades. Just saying that a man like George "practices" law brings a chuckle. He knows the law. He fights hard for his clients and they have a true advocate in him. He's always learning and constantly eager to know the next thing coming his way in the state of Texas as it relates to DUI law. I highly recommend George Scharmen.

I endorse this lawyer's work. This attorney is considered to be aggressive, hard working, and a valuable attorney by his clients. You should be calling this attorney if you have been arrested for DUI/DWI.