Fighting for Our Clients Is What We Do!

Jill is a Personal Injury Lawyer in Houston, TX, with 19 years of experience. If you have been injured by the negligence of another, Jill will fight for you and will not quit until the responsible party is held accountable. To recover damages resulting from your injury, such as your pain and suffering, lost wages, disfigurement, or other damages, you often have to prove liability against the negligent party in court. You have to present evidence of your injury, lost wages, and any other damages you have sustained. You need to hire a competent attorney who knows how to deal with the negligent party's insurance companies and their adjusters and lawyers. We do not tire until our client gets a just result. And we do not charge fees or get paid until the client is compensated.

When you have been injured by the negligence of another party, you need to choose a lawyer who is tough, dependable, and knows the law.  Jill has handled a large number of cases and prepared them for trial and settlement.  Jill is named Top 100 National Trial Lawyers in 2018 and 2019. She has been ranked among top Houston attorneys by Houstonia magazine in 2013, 2014 and 2015. Jill was voted Fellow to the Texas Bar Foundation in 2017, where only a very small percentage of Texas lawyers are invited to become Fellows. She was named Editor-in-Chief of The Houston Lawyer magazine in 2016-2017 and was board member of the Houston Bar Association THL from 2009 until 2017. She received the Houston Bar Association's Outstanding Service Award in 2017. Jill has won cases against the toughest opponents in Texas and the nation.

Jill Yaziji is licensed by the Texas Supreme Court and all Texas state courts, and the U.S. District Court for the Southern and Western Districts. She graduated from the University of Texas School of Law and won the Dean's Litigation Achievement Award at UT during her second year of law school. Jill served on the Editorial Board of The Review of Litigation while she was a student at UT-Law. 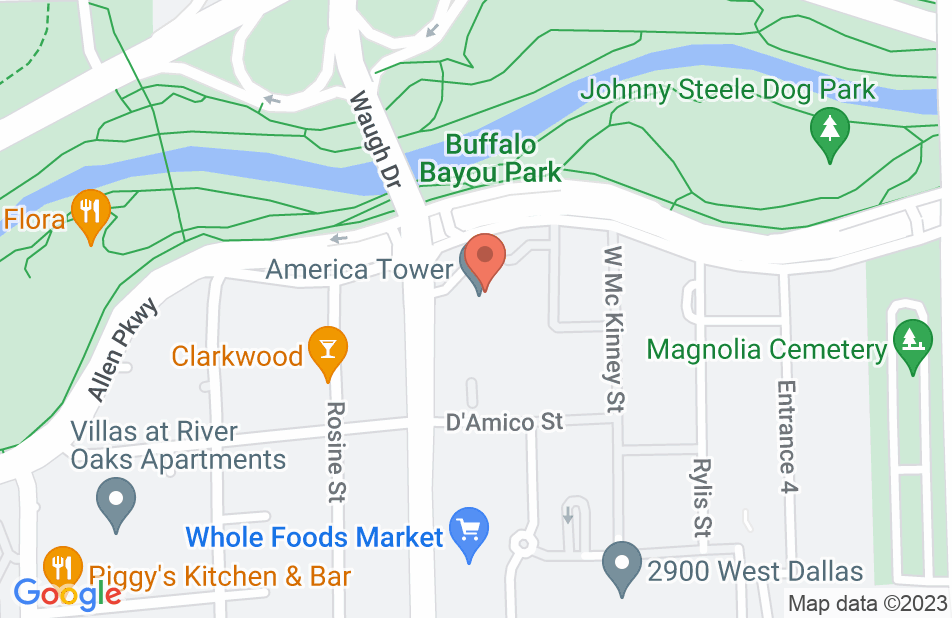 I was injured in a auto accident that required a year of therapy. Ms. Jill Yaziji is not only very knowledgeable but she is very detailed oriented and did everything. She checked in occasionally and I never felt alone. She is a very strong attorney and fights hard for you. She won my case and I definitely recommend her. She’s an A+.
This review is from a person who hired this attorney.
Hired attorney

Straightforward and highly competent lawyer. Ms. Yaziji was highly competent and straightforward. Most importantly, she and her office were very cooperative and her calm and empathetic demeanor offered support to myself and my family in our time of need. She did what she said she would do on the case and we got the results we were hoping for all within a reasonable time. We highly recommend her!
This review is from a person who hired this attorney.
Hired attorney

Ms. Jill is beyond all measure a brilliant lawyer. She is an attorney who is both strategic and strongminded. She’s out of the box intelligent and when bad stuff happened to me at an apartment complex, she was willing to fight for me for almost two years until my case settled. I will have to deal with my personal injury following the event for a long time to come, but in a major way, Ms. Jill helped me bring closure to this tragic time in my life. If you want a lawyer who is reliable, determined, and will fight all the way, then she is the one you should hire. Me and my family will always be thankful to Ms. Yaziji and her hard work in my case, and I cannot recommend a more professional, challenging, and brilliant lawyer than her. Mariam K.
This review is from a person who hired this attorney.
Hired attorney

I had a car accident in June 2017 where my sedan was hit at full speed by a full-size pickup, close to 610 Loop @ 290 exit. I was injured and my car was totaled, but I was lucky to have Jill Yaziji as my lawyer. I hired Ms. Yaziji to represent me against the other driver and she handled my case, dealing with all the parties involved. After my medical treatment was completed, she worked hard to get me a great settlement that fairly compensated me for my injuries. She is top-gun. I highly recommend her. Tarif Y. Agha
This review is from a person who hired this attorney.
Hired attorney

Jill was my lawyer in 2015. She is very intelligent, committed and highly professional in her job. She is very well updated in asylum cases and helped me a lot submitting and receiveing my case results. She is committed to do her best to guarantee the success of the case and very well aware of the consequences. I highly recommend her to everyone who seeks a trustworthy lawyer.
This review is from a person who hired this attorney.
Hired attorney

Jill Yaziji was my attorney in 2016. She is intelligent and determined and delivered a sharp analysis of my case that led to a great outcome. I highly recommend her.
This review is from a person who hired this attorney.
Hired attorney

As Architects we are always dealing with construction disputes and at times they end in litigation. We engaged Attorney Jill Yaziji to represent us in a Contract Litigation matter that involved multiple contractors, product suppliers, and two banks. Ms Yaziji was very versed in construction litigation and contract law, and was assessing the case from all angles and negotiated skillfully to reach a favorable outcome for us. Very professional, always available, and with sound advice. Highly recommended.
This review is from a person who hired this attorney.
Hired attorney

Mrs. Yasiji was my personal injury lawyer back in 2005. I was involved in a serious car wreck and went to several other lawyers for help in my special case. To make a long story short Mrs. Yaziji was the only lawyer that took my case and was able to get me a fair settlement for my injuries and medical bills when the other lawyers would not even touch my case. Mrs. Yaziji in my book is one of the better lawyers of Houston , a great person along with being a good friend I would recommend her and her services anytime to whom ever needs a good lawyer.
This review is from a person who hired this attorney.
Hired attorney

I met Ms. Yaziji in late 2015 after talking to other well known asylum lawyers. I felt comfortable with her and decided to hire her for my asylum case. Words can't describe how thankful I am to her.
This review is from a person who hired this attorney.
Hired attorney

Ms. Yaziji handled my asylum case. She is an amazing lawyer that helped me during a hard time and an awesome person who is always ready to help. She is an excellent and professional lawyer and cares and replies fast on my emails to address my questions. I advise anyone who is looking for a great lawyer with five star services to choose this awesome lawyer
This review is from a person who hired this attorney.
Hired attorney
See all reviews

I have had the privilege to work with Jill Yaziji for the past few years as co-counsel on various cases. She has always been a pleasure to work with. She is highly intelligent, dedicated, and a zealous advocate for her clients. I fully endorse Jill Yaziji to any client who seeks both strong and professional representation in litigation.

Jill is an excellent immigration attorney and a zealous advocate for her clients. I recommend that you call her if you have any questions about any facet of immigration law.

I endorse this lawyer. Nejd is hardworking, ethical and very knowledgeable. Her legal skills are top notch and as a result I feel comfortable referring her clients.

I would and have recommended employment law cases to Jill. She is a dedicated, zealous advocate for her clients. Jill is hard working and compassionate. She has an attention for detail and will not let anything fall through the cracks.