Attorney Stephen Babcock is a Baton Rouge personal injury lawyer that serves the entire state of Louisiana. He is an avid outdoorsman and golfer who enjoys all that southern Louisiana has to offer.  His favorite activities involve offshore fishing and duck hunting.  What’s more,

Stephen is a Baton Rouge car accident lawyer who is ready to hear about your auto wreck. But, Stephen also handles 18 wheeler accidents among other types of case. Call our firm to find out how Stephen can help you!

We have a 100% Client Satisfaction Guarantee.  You have nothing to lose.  Get Even! Call Stephen! 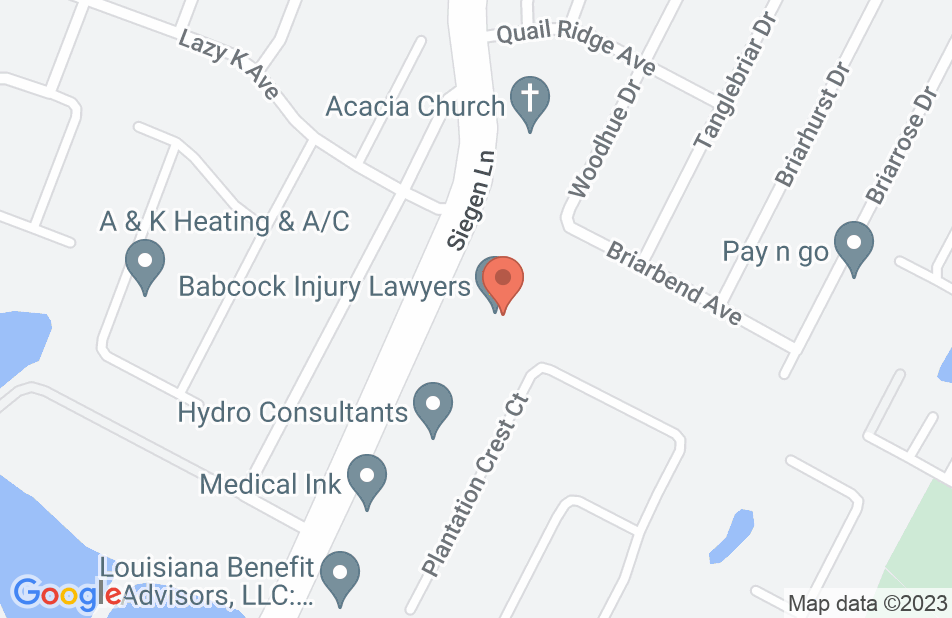 I am very pleased with the services rendered by Ben O’Connor. He was very polite, responsive, polite and beyond professional.
This review is from a person who hired this attorney.
Hired attorney

was on a road trip from Tampa to Austin, and causing through LA, there are so many speed limit changes, it was hard to keep up. on top of that i had forgotten about my citation, an dit became a bench warrant when i got the mail. thankfully i found the Babcock firm. took care of everything swiftly and effectively. very thankful that i found them. thank you!
This review is from a person who hired this attorney.
Hired attorney

Consulted then hired Ben O’Connor for speed trap ticket in Pioneer Village, in 3 days , mission accomplished! Great work Ben!
This review is from a person who hired this attorney.
Hired attorney

I had an accident in Baton Rouge at the end of Nov. 2018. A reckless driver made an illegal turn and I crashed into it. The other driver's car was disabled and my car was badly damaged. I had serious neck and hand issues. I went to urgent care twice due to pain. Except that I had no idea about what to do. What was worse was, I was not familiar with the city or the state at all. I was supposed to be in the city for several months only. While talking to an insurance adjuster for the other driver after the accident, I soon realized that the issue was beyond my capacity and I definitely needed help. Until then, I did not have a car accident, so I had no idea. In the end, I decided to have professional help. I talked to colleagues and checked websites. Then, I called several firms. Stephen Babcock was available for free consultation and advice. He made me feel comfortable and gave me a lot of advice. In the end, I decided to hire him. This turned out to be one of the best decisions of my life. He listened to me, helped me a lot in many ways. His team closely worked with me. Communication was fast and friendly. The team made it sure that I got what I wanted. Mr. Babcock fought hard for me. The final settlement was quite surprising. Without Mr. Babcock, I dont' think it could not have been even imaginable. I would recommend Mr. Babcock to anyone who needs legal advice and help.
This review is from a person who hired this attorney.
Hired attorney

Helped me with my car accident in Baton Rouge

I hired Stephen Babcock to help me with my automobile accident that I was involved in on 08/04/2016. He helped me with my medical care and settled the case without needing to file a lawsuit for the full policy limits. I would recommend.
This review is from a person who hired this attorney.
Hired attorney

6/5 Stars Should Be An Option

I will start by stating I wish there was a 6/5 star option. During my senior year at LSU, I was involved in an automobile accident. The collision totaled my truck and resulted in me needing 4 months of medical attention. I was getting nowhere with the other party's insurance company. After several months of unanswered voicemails, they (Hertz) finally called me back, feeding me a bunch of lies, stating that their driver was cleared and the file was closed, leaving me responsible for all of my medical bills and telling me not to contact them anymore. I called Stephen Backcock, at Babcock Partners - Personal Injury Law, about my case. He understood that I was busy with school and met me after hours (~8:15 p.m.) for a consultation. During the consultation, he assured me I had a case, and promised that he would fight for me, and win. The very next day I, miraculously, received a phone call from Hertz, who spoke with Stephen that morning. Contrary to the initial return call, the Hertz agent was very nice and professional. The call came too little too late, and I instructed them to contact my Lawyer, Stephen Babcock, from there on out. In the closing week of the case, Hertz threw out a settlement offer that I was more than happy to accept. Stephen gave me counseling not to accept the offer, stating it would serve as a minimum guaranteed amount, he knew my case was worth more and that he would not settle until I get I what I deserve. That very same day Stephen settled my case, for almost double the initial amount, which far exceeded what I ever thought my case was worth. Besides settling my case so successfully, Stephen far exceeded all expectations I've ever held for an attorney. He treated me with respect and honesty, he was sure to update me with any new information he had on my settlement (also when he did not have updates, just so I would never feel forgotten about), gave me his personal cell phone number so I could text him when he was away from his office, met with me whenever I was available (mostly after hours with my school schedule), and I never walked out of a meeting (or phone call) without feeling more confident than before it started. His staff is also top-tier. They always greeted me with a smile, returned every phone call I made (by the length of this review I'm sure you can tell I called a lot), and placed me in a conference room with coffee, water, and snacks while I waited for my appointment to start. Stephen and his staff have kept in contact with me since the closing settlement. I dropped by one day, unannounced, to thank Babcock Partners for everything they did for me. They were more than happy I stopped by and Stephen even came out to the parking lot to check out my new truck. A few months after settling, my mother-in-law was involved in an accident. I was more than excited to recommend Stephen to represent her. I gave him a call to tell him about her accident and that she was hesitant to involve a lawyer (as lots of people are). To ease her mind and worries, he took the liberty to contact her himself. To date, he is representing my mother-in-law for her settlement, helped her get all the medical attention she needed, and she is ever so grateful he called her that day.
This review is from a person who hired this attorney.
Hired attorney

I was "doored" by a car while on my motorcycle. There were lots of complications to my case: the severity of my injuries, the unique nature of the accident as a non-moving accident between different modes of transportation and the complicated aspects of my own insurance policy. Stephen was reassuring about the validity of my claim at our first meeting, arranging for a full medical and neurological evaluation and expert medical treatment that helped me recover physically much sooner than I expected. He negotiated tirelessly for two separate settlements for a larger total sum in spite of all the road blocks the insurance companies threw his way. He is the epitome of a seasoned, intelligent and decent lawyer.
This review is from a person who hired this attorney.
Hired attorney

Stephen's firm handled my motorcycle accident case for me after an other attorney didn't do what they promised to do in a timely manner. Stephen and his team took over and got me what I deserved in less time than I anticipated. I really enjoyed the process with them, from meeting in person to their support staff to the final result. I have since used Babcock's services for my business dealings and they are being handled with the same attention to detail and professionalism. I recommend this firm to anyone that has high standards.Thank you Stephen and Chase!

Stephen is an exceptional attorney. Highly skilled in litigation, as well as business and commercial areas of law. I have worked with Stephen on multiple matters over the years, and know him to be a professional advocate for his clients and is respected among his peers.

Stephen Babcock is an outstanding, results-oriented litigator. He is smart, practical, and persuasive. I would recommend him to any client in need of a top lawyer.

I endorse this lawyer's work. Mr. Babcock is an extremely experienced and skilled litigator and lawyer.

he worked hard for his client and did it in a porfessional manner. Hard to find lawyers like those these days