Mike was active in a variety of activities when he was growing up. He was an Eagle Scout in Boy Scouts, and later an Assistant Scoutmaster. In college, he was active in student government, and worked to help pay his way through school. He graduated with honors from Bowling Green State University with a Bachelor of Arts Degree in 1982. He was awarded the University President's Award for Outstanding Service.

Mike attended law school at George Washington University, which is regularly ranks among the nation's top 20 law schools. He worked doing legal research at a large law firm, and also was a research assistant in the law library. He helped edit a publication that covered environmental law topics. Mike also did an externship with the legal clinic, where he represented poor people in District of Columbia civil courts. Mike graduated with his law degree in 1986. That same year he took and passed the Montana Bar Exam.

Mike worked in business management for TW Services until 1988, when he and Marcie got married at Christhaven Catholic Retreat Center near Anaconda. Shortly thereafter, Mike began working as Deputy County Attorney in Anaconda.

Mike has been a licensed attorney since 1986. He served four years as deputy county attorney and a prosecutor in Anaconda. Beginning in 1993, for four years, he worked to build a private law practice in Anaconda (Grayson & Petrovich Staedler). He also stayed involved in the criminal justice system, agreeing to represent indigent people as a public defender when appointed by the judge.

In 1996, Mike was elected County Attorney by a wide margin in the June Democratic primary. He was unopposed in the November general election, and was sworn in on January 6, 1997. In 2000, Mike ran unopposed and was re-elected to a second four year term.

In 1999-2000, Mike served on the Anaconda Jail Task Force, which successfully passed a $2.5 million dollar bond issue to replace Anaconda's 100 year old jail. Mike has stayed involved, helping work other county officials to get affordable bids, and to help review policies of the new detention center to reduce liability. The new Anaconda Law Enforcement Center opened in April 2004, and is a huge improvement over the previous facility.

He was elected by other county attorneys to serve on the Board of Directors of the Association. While County Attorney, Mike obtained a state grant that helped fund victim services for Anaconda. For eight years, Mike managed to keep the victim advocate position funded, through a combination of grants, criminal surcharges, and county general fund money. During his eight years serving as County Attorney in Anaconda, Mike handled hundreds of felony cases, ranging from assaults and drug cases, to several homicide cases. In 2004, Mike was awarded the Distinguished Service Award by the Rocky Mountain Council of Mental Health Centers. The award was given for Mike's support of various mental health programs. Mike was the first county attorney to receive the award.

From 2002 to 2008, Mike served as a Cub Scout Den Leader, helping young boys in Anaconda grow up with the skills and moral values that Scouting teaches. Mike has also served as a baseball coach, and he is actively involved in the community.

When Mike left the Anaconda Deer Lodge County Attorney's Office at the end of 2004, he joined with Ray Dayton in the Dayton Law Firm. They practiced law together for two years, until Ray was elected to serve as the Third Judicial District Court Judge.

Mike bought the law firm from Ray, and the Grayson Law Firm was formed in late 2006. In June of 2007, Mike purchased the building at 112 East Commercial, and relocated his law firm from the Montana Hotel to that location.

So, after over twenty years of law practice, Mike understands how to serve his clients. He listens carefully to them, and works hard to achieve their goals in each case. 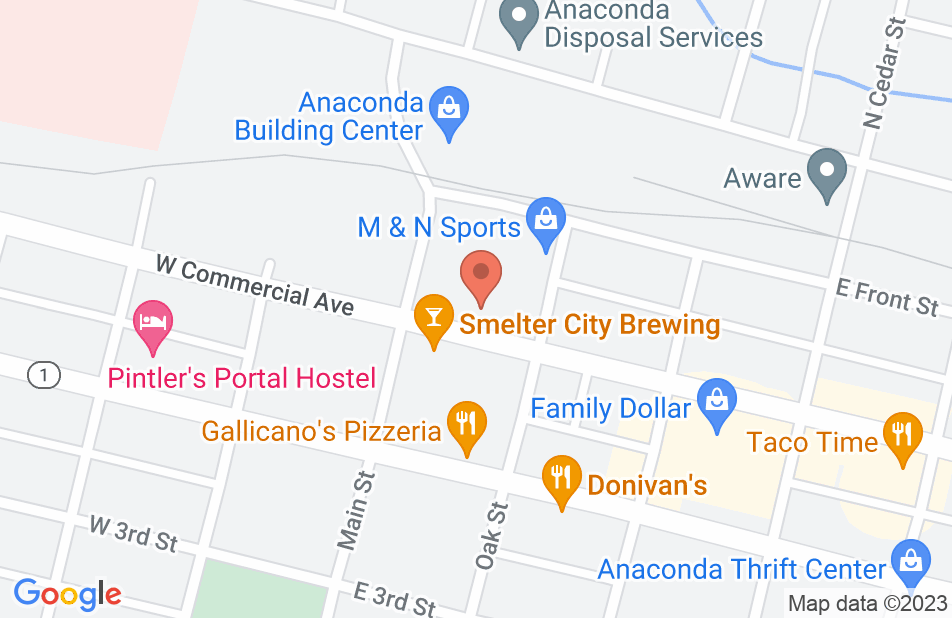 Mike did a great job on my case.

Mike handled my accident case. I was hurt in a bad accident on I-90 a couple years ago. I was off work for almost a year, and even after i was working, it turned out that I had a head injury I didn't know about. Mike didn;t rush me into a settlement, and good thing too. We just settled the case this month. We got alot more money once my neuropsych evaluation confirmed that I had a mild brain injury. I got a six figure settlement, and am very happy with how things were handled.