Shahid Haque dedicates his practice to helping immigrants obtain legal status in the United States and pursue all that the country has to offer. Mr. Haque assists clients with a wide variety of immigration matters, including applications with the consulates abroad and U.S. Citizenship and Immigration Services, representing clients arrested by the Department of Homeland Security, and defending immigrants in deportation proceedings in Immigration Court.

Mr. Haque has represented over a thousand immigrants and their families all across Montana.  Mr. Haque helps clients with a wide variety of family and employment based visas. He has won asylum for over  twenty refugees who fled from their home countries to escape torture, persecution, and death on account of their political or religious beliefs. He has also won cancellation of removal for numerous clients in contested deportation proceedings — one of the most difficult forms of relief to win due to its high burden of proof.

Mr. Haque has advocated for immigrants’ rights by bringing lawsuits in state and federal court to challenge unconstitutional laws and policies that discriminate against immigrants in Montana. He successfully challenged LR-121, an anti-immigrant voter-approved referendum, and thanks to his efforts the law was found unconstitutional.

In 2013, he filed a class action lawsuit against the Montana Highway Patrol to challenge its practice of detaining Latino drivers and passengers solely for the purpose of checking into their immigration status.  In 2015, he prevailed with a judgment in his favor. Under a new policy, troopers cannot ask about immigration status based solely on a person’s race, ethnicity or language abilities.  Nor can they demand drivers or passengers tell them their immigration status or detain people who choose not to answer.  Montana is now one of the only states with a clear policy prohibiting this conduct.

In November 2016, Mr. Haque won a settlement of $125,000 against Jefferson County, Montana on behalf of a Mexican immigrant who was sexually assaulted while in immigration custody in that facility.

In the Fall of 2015, Mr. Haque taught immigration law at the University of Montana School of Law. Mr. Haque is a member of the American Immigration Lawyers Association. He is also the founder and President of the Montana Immigrant Justice Alliance (“MIJA”), a statewide non-profit organization focused on immigrant justice issues. You can read about MIJA’s mission by clicking here.

In 2017, Mr. Haque was the recipient of the ACLU's Jeannette Rankin Civil Liberties Award, in acknowledgement of his service to immigrants in the State of Montana.

Mr. Haque lobbies for fair immigration policies in the Montana Legislature, and teaches training courses for immigrants and allies on immigration law, debunking myths about immigrants, knowing your rights when dealing with law enforcement, and the need for comprehensive immigration reform. In 2010, Mr. Haque trained at the Western States Center’s Community Strategic Training Initiative in Portland.

Mr. Haque earned his Juris Doctor from the Chicago-Kent College of Law, with High Honors, in 2005. During his first year in law school, he won the West Publishing Award for earning the highest GPA in his class. Mr. Haque served as Notes and Comments Editor of the Chicago-Kent Law Review, where he also published a scholarly article on labor and immigration policy. Upon graduation, he was inducted into the Order of the Coif and won the school’s Bar & Gavel Award for outstanding service to the immigrant community. During law school, Mr. Haque was an intern with the National Immigrant Justice Center. He received his bachelor’s degree in Business Administration and Sociology from the University of Southern Indiana in 2001.

Mr. Haque is a member of the Illinois and Montana Bars, and is admitted to practice before the Ninth Circuit Court of Appeals, and the U.S. District Courts for Montana and the Northern District of Illinois. Mr. Haque represents immigrants throughout the country, and has appeared before Immigration Courts in numerous states.

Mr. Haque resides in Helena, Montana with his wife, Sandra, and his family.

For a consultation with Mr. Haque, please submit our online form. 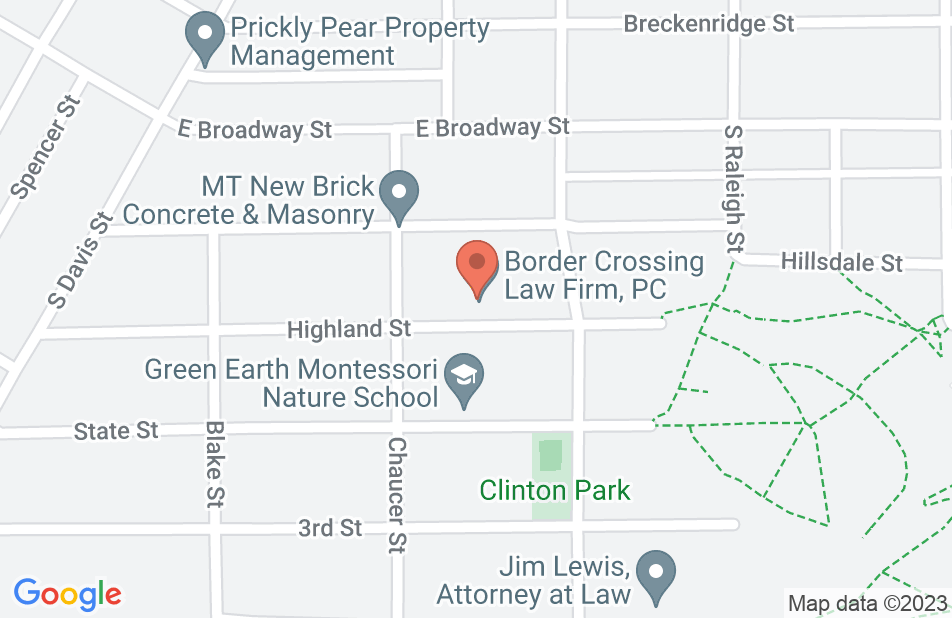 My husband and I found Shahid from Border Crossing Law Firm essential in our success with navigating and receiving a positive outcome in our adventure through my change of status request through the US Immigration Office in Helena, MT. We decided early in our quest to seek representation, and Shahid was there to answer all questions that did arise giving us security and knowledge for our success in adjustment of status. We met with Shahid prior to our wedding so that we would have a good understanding of the process that would be involved in getting married to my now husband who is a US-born citizen. I arrived in the USA under J-1 exchange visa, with no intention of falling in love and staying here beyond my visa. We filed all the necessary forms under Shahid’s supervision which meant that everything was filed properly. Shahis was helpful in time frames that we were able to honor my visa contract as well as stay compliant and start the process in good standing with immigration and moving forward with as little complications as possible which was actually checked during our interview. By the time we got to the interview we have experienced the shut down nationwide of Covid-19 which seemed to effect immigration and prolonged our processing time. Fortunately we had Shahid so we felt like immigration lawfully contacted him in instances they notified him rather than us which might have been a hole or maybe trap in which we would have fell victims too. However having Shahid I believe made it so that immigration was more straightforward with requests or requirements that needed to proceed with our case. Bottomline we would highly recommend anyone in need of an immigration attorney to hire Shahid. Finally, we’d like to give you some dates of how our case developed: November 2019 - We sent the documents to USCIS December 2019 - Biometrics Appointment March 2020 - Interview scheduled but then cancelled due to Covid-19 August 2020 - Interview October 2020 - I got the Green Card (might have been earlier unless we had to send a new I-693 form).
This review is from a person who hired this attorney.
Hired attorney

Mr.Sahid and his office did a great and professional work solving my wife’s case,everything was so fast en efficient,thanks Sahid for your great work.
This review is from a person who hired this attorney.
Hired attorney

Shahid has been my lawyer for over two years and has done an excellent job with his experience and knowledge. He explained the law, outlined in clear language the steps in the process that where needed to be done. I highly recommend him for any immigration process you might have.
This review is from a person who hired this attorney.
Hired attorney

I hired Mr Haque for my inmigration needs in October 2019. He is a very professional lawyer. He clearly answered my questions. I got my green card in March 2020. Thank you Mr Haque!
This review is from a person who hired this attorney.
Hired attorney

Shahid's communication with me was great. He was very thorough and informative. As an immigrant I felt safe and protected.
This review is from a person who hired this attorney.
Hired attorney

My wife and stepson’s greencards had expired and we were receiving notices of deportation proceedings when we asked for Shahid Haque to help us. He worked fast to get out the forms we needed to resolve this and we were able to avoid the deportation process/hearings. His firm did an outstanding job for us and I would recommend them to anyone.
This review is from a person who hired this attorney.
Hired attorney

A very thorough and accessible attorney

My friend from Eritrea needed to prepare for his green card interview with USCIS and needed help gathering all the proper documents and learning what questions might be asked. I was very afraid, given the political climate, that there would be unexpected difficulties and I would be of no help. Mr. Haque was highly recommended as the experienced person we needed to counsel us. He was very generous with his time and answered all our questions whenever they came up. Thanks to him my friend was very well prepared and received his green card in the mail a week after the interview. We are very grateful for his expertise!
This review is from a person who hired this attorney.
Hired attorney

Shahid Haque did very Excellent lawyer. He did so so amazing job. Also all the time helpful person and great commitment For me. We met during 2015 my green card renewed time. He did helped me to Until citizenships to done. I will recommend hem for everybody. Because he did very wonderful job. Thanks for helping me. I wash a best work year for and family. I gave you point for job 100% to 100% Habtamu G
This review is from a person who hired this attorney.
Hired attorney

Shahid is a very consummate professional. I trust his knowledge and quality of representation as my lawyer. I will use his service again. Highly recommend for your immigration needs.
This review is from a person who hired this attorney.
Hired attorney

Mr Shahid is an amazing lawyer!!

He helped me and my husband in every step of our case.He is very professional and really cares about his clients. I would recommend him to anyone looking for an immigration lawyer!! Rutkowski
This review is from a person who hired this attorney.
Hired attorney
See all reviews

Mr. Haque-Hausrath is hands down the best immigration attorney in Montana. I have personally seen is dedication and commitment to his clients and his successful results on many occasions.