Attorney R. Daniel "Dan" Berchiatti has been an attorney for twenty years and defines his success by achieving the highest level of customer satisfaction possible.  He is comitted to providing personal service to each and every client.

Mr. Berchiatti attended Hope College and earned a B.A. with honors in 1992 majoring in both political science and history. He attened Wayne State University Law School in Detroit, was a member of the Wayne State National Moot Court Team, and graduated in 1995. Missing the people and places in west Michigan, Dan returned to Ottawa County and opened his office in Allendale in 1997. 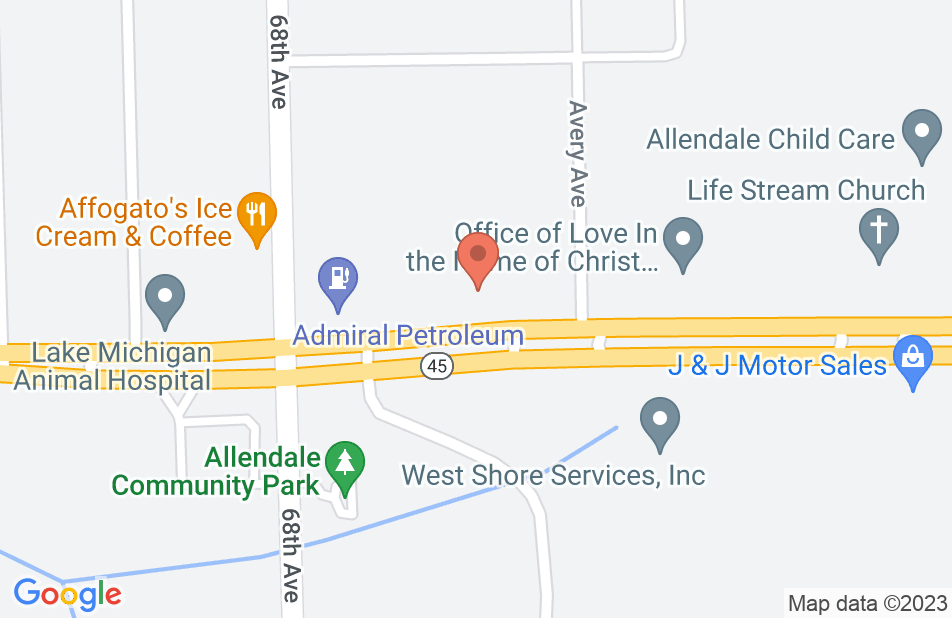 Dan was very professional during my divorce. He explains the process very well. That helps make better and more informed decisions. I would highly recommend Dan for your legal needs
This review is from a person who hired this attorney.
Hired attorney

I met with Mr. Berchiatti by way of reference of a shared acquaintance. Before our first meeting, my only perception of divorce and/or lawyers was from what I gleaned from television or movies. Due to my naive understanding of reality, I guess I expected a huge building with numerous secretaries and even a reporter or two. Divorce is an awful experience I wouldn't wish on my worst enemy. Instead, I entered the small building in Allendale, was approached at the door by a gentle golden lab, and then quickly greeted by Mr. Berchiatti who introduced himself as Dan. The first thing he asked when we went into his conference area was that I tell him "what's going on." He was patient, attentive, asked questions, and took notes. Since it was my wife that had filed, I was unfamiliar with the process (and always felt a step behind), but Dan examined my case (they are all different) and was able to succinctly outline several key components: 1. What to expect next 2. What to do to prepare for what happens next 3. What not to do! I did not feel rushed. I did not feel ashamed (maybe a little). I did not feel I should look for a different attorney. I was almost always able to reach him right away, and if not, he was certain to return my calls at his next convenience. He even went out of his way to explain to me how to fill out large portions of the paper work on my own, thus saving myself money by not paying him to do it. I never felt he had anything but my best interest in mind. As I said, every divorce case is different, and what works for one, may not work for another. However, I have no regrets having hired Mr. Berchiatti to represent my case, and I have no reservations about recommending him to others.
This review is from a person who hired this attorney.
Hired attorney

His approach is ethical and fair. He is excellent with communication, follow up and attention to detail.
This review is from a person who hired this attorney.
Hired attorney

We have hired Dan for many things during our time as business owners. He has also done work for our families personal affairs over the past years. He has always been helpful in his advice and has won many cases for us in court. We have recommended him to many of our friends and they have all been very satisfied with him and consider him "Their" attorney.
This review is from a person who hired this attorney.
Hired attorney

I have known Roger Berchagtti for almost twenty years. During this time, Roger not only has been my lawyer but mentor. Roger is compassionate, kind and respectful of your situation. His exemplary accomplishments in the legal field has not gone unnoticed. Roger will not only work hard for you; but if he feels your case is not his expertise, he will search for the most qualified lawyer for you. I have recommended Roger to many of my co-workers, who have thanked me numerous time for the advice. I not only see Roger as my lawyer but also as my friend.
This review is from a person who hired this attorney.
Hired attorney

Roger Berchiatti has always been extremely professional and approachable. He makes you feel like you have someone in your corner willing to fight for your rights.
This review is from a person who hired this attorney.
Hired attorney

Divorce with little to no frustration

I hired Dan to handle my divorce in 2016, knowing that it was not going to be an easy separation. He helped in making it much less painful for, I think, both parties. His cost was fair and always up front and explanatory, and always treated me like I was his only client. His response even in followup was always right away and very direct.
This review is from a person who hired this attorney.
Hired attorney