Exceptional Representation. Exceptional Results. We have the experience to build a strong legal plan and the commitment to see it through.

I currently serve in the following community volunteer roles: Director at Large for the Washtenaw County Bar Association, Trustee and Secretary for the Ann Arbor First United Methodist Church, President and Board Member for the Kenyan Urithi Educational Fund, and President of an Ann Arbor Home Owner’s Association.   My hobbies include:  Skiing, Basketball, Sailing, Photography, and Travel. 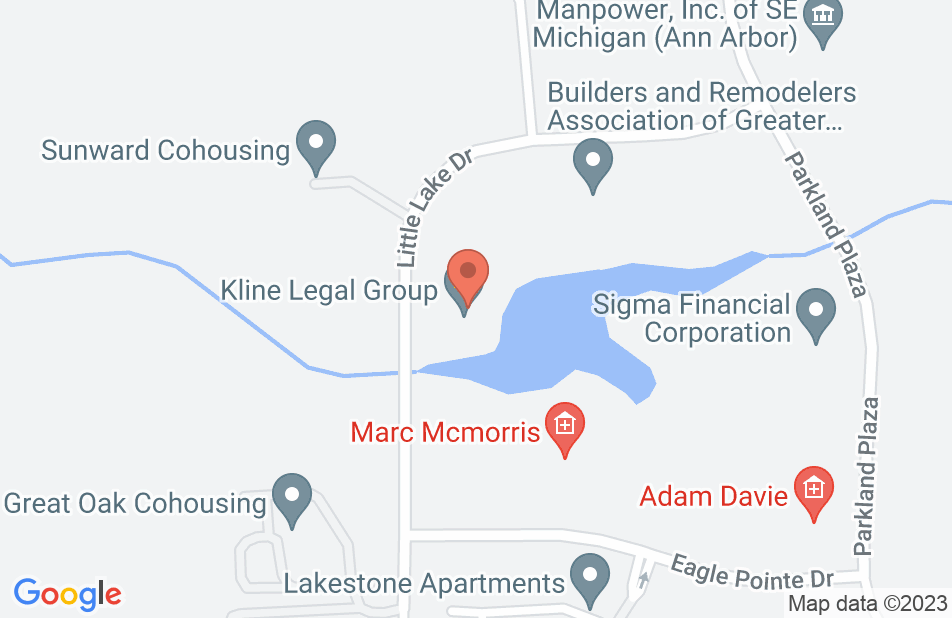 The Best in the Worst Situation

John Kline and his office bring honesty, integrity, an ability to trust and an overall best interest for your children back into the legal system. My exhusband and I have been through battle after battle, John is the one person I can always trust for sincere advice and direction. I could never express how grateful I am to the Kline Legal Team. I am so tremendously appreciative that words could never do justice my true heart's feelings for the care and protection they have given over my childrens lives.
This review is from a person who hired this attorney.
Hired attorney

You will have no regrets

Without Mr. Kline's representation, my life would have continued to be a nightmare. He put a stop to the injustice and got me results. He was worth every penny. He was professional, fair, approachable, hard working, and highly competent. He took the time to read/analyze the evidence I provided and apply what was useful strategically when the time was right. During my trial, I felt so armed because Mr. Kline knew the law inside and out and could rattle off precendent court cases to the judge with ease to make his points. He also had good rapor with the judges. Mr. Kline was always forward thinking and included language in the legal documents to protect me from things I never imagined. I very much felt I was represented by someone who truly had my best interst in mind. For all of the above reasons, I strongly recommend Mr. Kline.

John K. Kline restored my Faith in the system!!!!

John K. Kline is a terrific lawyer and although I have worked with other "good" lawyers, I specifically hired him to represent me in court for an evidentiary trial hearing. When I first met John I told him I was looking for a "Bulldog" and his response was not what I expected. John told me, "I would not describe myself as a "Bulldog", but I can tell you that I am a competitive person and I do not like to lose". I learned quickly, after working with John that I would rather have a "competitive" lawyer, who is composed, knowledgeable about the law and who is an extremely persuasive speaker in the courtroom. In my case, John had all of these attributes. John prepared tirelessly and diligently for court and one of his main strengths is that he has a gift to persuade others with his knowledge of the case and the law. John blew me away in court because he conducted himself in a way, which won the respect of his peers and the judge in the courtroom. John has the innate ability to cross examine in a tough manner, but still remain the more likable attorney. I believe his success as a lawyer is tied to his charismatic, competitive and compassionate personality. John was easy to work with and he was straight with me on how important it was to display me in the best possible light to the courts. John did a great job preparing me for court and for cross examination. Cross examination terrified me, however John was excellent at building my self-confidence and I really felt prepared for the battle I was facing. In my trial, ironically, John was up against a ”Bulldog” type lawyer and I truly believe my case was won by John’s courtroom style, his ability to make the tough decisions on who would testify in my case, how he would go about cross examining the other side and most importantly how he would weaken the defendants case which was strong against me. After working with several lawyers prior to John K. Kline, I have the experience to not only recommend Mr. Kline; I can also say that without his help I would have lost my case.

I have known Mr. Kline for many years. I have had cases where he is on the other side as well as cases where we have worked together. He is skilled in the law and a real professional. I have sent a number of matters to him over the years trusting that he will properly represent the people I send to him and I have never been disappointed. I fully and completely endorse Mr. Kline.

I endorse this lawyer. I have known John for years. John is always prepared, always professional, a strong advocate for his clients and an attorney who stays current with all of the changes in the law. In addition, he is does a great job representing his clients, listening to his clients, not promising outcomes that are not obtainable and extremely ethical. Class act all the way around.

I endorse John. I have sent my client's to John because I know they will be well taken care throughout the life of the matter. He is diligent, empathetic, knows the law and will represent my client's best interest. Further, he is a great communicator keeping his client's fully informed as the matter progresses.