After working as a partner at the firm of Yosha Cook Shartzer & Tisch, alongside trial legend, Louis “Buddy” Yosha for nearly 13 years, Jason decided to start his own firm. Mr. Shartzer currently sits on the Brebeuf Alumni Board of Directors, as well as the Board of Directors for the Indiana Trial Lawyers Association.

His accolades include an AV-rating (the highest rating an attorney can earn) from Martindale-Hubbell. He was also named in the “Top 40 Litigation Lawyers Under 40” multiple years running, as well as the “Top 100 Trial Lawyers” by The National Trial Lawyers in 2014, a Rising Star in Super Lawyers multiple years, and a Distinguished Fellow recipient from the Indianapolis Bar Foundation in 2014. 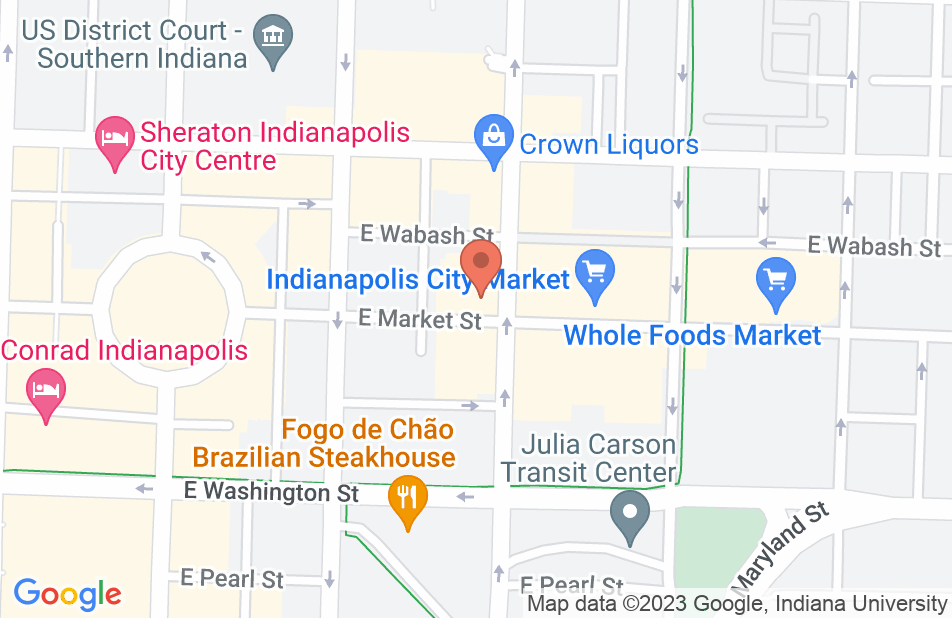 Mr. Shartzer & his law firm was very personable & professional during my 3 1/2-4 year lawsuit. There was 6 of us involved in a semi wreck , that left all of us w/ serious injuries. Mr. Shartzer walked us through the process before I hired him, everything he said was true. Mr. Shartzer & his law firm always had time to answer my question @ all times of the work week & throughout the process. If Mr. Shartzer wasn't available then his team @ his law firm would help w/ my any questions they were approved to answer or help with. Mr. Shartzer didn't hide anything nor sugar coat anything about the upcoming events in my case. Mr. Shartzer showed me both sides of settlement's before & after trial. Lucky for us Mr. Shartzer & his leagal team got a settlement before we started a trail. I learned alot about semi wrecks, the pain & injury that I have. Mr. shartzer is very smart & cares about his clients. I Learned alot about medical procedures & health for my future. Mr. Shartzer & his Leagal team did everything & more than they said they would do for me & my family to help resolve this lawsuit, hopefully I'll never need his help in another semi wreck, but if it happens again I will not hesitate to call Mr. Shartzer & his very professional legal team. Mr. Shartzer & his legal team will fight with every fact, every law they need to win your case, don't make the mistake as some of us & just go w/ whoever. Do your self a favor & call Shartzer law firm now, don't hesitate. They will walk you through & be on your side from day one.
This review is from a person who hired this attorney.
Hired attorney

Jason Shartzer and his team at Shartzer Law were able to get me a settlement deserving for my circumstances. I was the victim of a Semi Truck wreck. The insurance company hired lawyers and private investigators to try to keep from having to pay me. Jason's knowledge of the law and my situation helped to ensure that I received a substantial settlement. I would recommend Shartzer Law for anyone involved in an auto or semi tractor accident.
This review is from a person who hired this attorney.
Hired attorney

Jason Shartzer was my phenomenal lawyer who helped get me through a very difficult period of my life after my injuries. He set the correct expectations regarding the timelines and the process which helped to alleviate a lot of my concerns. The entire process was new to me and Jason took the time to help explain everything to me every step of the way. He was always accessible and responsive to my communications in a professional and timely manner. I will recommend Jason Shartzer to anyone in need of a genuine, quality lawyer.
This review is from a person who hired this attorney.
Hired attorney

I contacted Jason the day after my mother, 2 year old daughter and I were in an accident involving a semi. Jason that evening came to our home and discussed what happened, got every detail and explained how everything would work. He was very quick, efficient, and caring when it came to our case and getting things done. He made it easy for us when we were in one of the hardest times.
This review is from a person who hired this attorney.
Hired attorney

I had a difficult case against a company known to be very adversarial. Mr. Shartzer did a very skillful and effective job of getting me a settlement far larger than I expected, without even having to go to trial. I am extremely pleased that I hired Mr. Shartzer and highly recommend him.
This review is from a person who hired this attorney.
Hired attorney

The Best Lawyer Money Can Buy!

I was the victim in a bad motorcycle accident, and Mr. Shartzer did whatever it took to make sure my needs were number one! I had no idea how the legal system worked in such a case, but Mr Shartzer did, and he guided me through it with ease. He was always available to answer questions that I had, and he made sure I understood each step of the process. Mr. Shartzer's services was probably the best money I ever spent!
This review is from a person who hired this attorney.
Hired attorney

I can't say enough good things about Jason Shartzer. Jason represented me in a car accident case that took over 4 yrs to resolve. It ended up going to trial, something no one ever want to do. From the very beginning to the end he worked my case as if it were his only case. He and his paralegal, Jamie, were always there to answer any question I had or just to reassure me that everything was going just fine. He and Jamie always reassured me with a smile and somehow always made me feel better about how things were going. Jason put so much into my trial I believe he knew more about my accident and injuries than I did. He and Jamie were great during my trial, they were calm, professional and kept a smile on throughout the trial. They also worked just as hard to keep me calm. My trial was a great success! So if you're looking for an attorney who is very experienced, knowledgeable, skillful, respectful and caring but yet also down to earth, funny and personable then Jason Shartzer is the attorney you want taking care of you. I'm extremely happy he was my attorney!!
This review is from a person who hired this attorney.
Hired attorney

Jason was very helpful through out the process. Took me through everything step by step. I would recommend his services to anyone who needs them.
This review is from a person who hired this attorney.
Hired attorney

Mr. Shartzer did an amazing job in on our case that involved extensive personal injury at someone's home. This case was sensitive for many reasons, including our long time relationship with the family. Above all, he kept the need of his client in mind and fought for us with the Insurance company to ensure that all of our medical needs were covered and more. Truly, I can say enough good things about his integrity, expertise, and experience in resolving personal injury case. He works diligently to provide what is BEST for the client first. I highly recommend Mr. Shartzer.
This review is from a person who hired this attorney.
Hired attorney

A friendly and helpful lawyer

I was in a bad car accident years ago that wasn't my fault and thankfully Mr. Shartzer helped me. I had no idea what I was going to do or how to even make a claim. Mr. Shartzer and his staff took care of everything! The deposition scared me the most and he made it a painless process. To make a long story short we settled out of court. I was more than happy with the settlement and was able to pay all my bills and buy a brand new car.
This review is from a person who hired this attorney.
Hired attorney
See all reviews

I have worked with Jason in the past on a few cases and he is an experienced trial attorney and excellent personal injury litigator. I would highly recommend him.

I endorse this lawyer. Jason is an aggressive advocate for his clients. He has an excellent track record of success in personal injury cases because he is completely dedicated to the success of his clients.

Mr. Shartzer is a highly experienced and well respected member of the legal community. He is a zealous advocate for his clients and really cares about their experience with his firm. He handles a variety of cases in the personal injury spectrum and his clients are in very good hands when working with him. Mr. Shartzer is professional, caring and loyal to his clients.

Jason Shartzer is a hard working, knowledgeable and client centered personal injury attorney who deals with the "big cases" every day. Jason's professionalism and charisma have led to him having friends on both sides of the case which in turn allows him to get the job done where others simply can not. At the same time, it always seems as if Jason is able get every penny from the insurance companies that his clients deserve. As a client of Jason's you can rest easy knowing that you are being represented by one of the best in the business.