A local law firm with a national reputation. Call now.

The best way to judge an attorney is by his trial record. In two decades of practicing law in Tennessee, Dail Cantrell has obtained tens of millions of dollars on behalf of his clients and other notable results in the courtroom and in negotiations, including a not-guilty verdict on attempted murder charges.

Mr. Cantrell has taken more than 220 cases to trial, with a success rate of nearly 100 percent. He has been recognized at the national level for excellence in his field, and is a recipient of the McClung Medal and the Ray H. Jenkins Award for Trial Advocacy. He has recently been selected for membership in the exclusive Million Dollar Advocates Forum, limited to attorneys who have obtained multiple trial verdicts or settlements in excess of $1 million, and was even the subject of a documentary on Court TV.

Dail practices primarily in personal injury and wrongful death litigation, from auto and truck accidents to medical negligence and work-related injuries. He also handles lawsuits for child sexual abuse, insurance bad faith and other civil litigation. Dail has advocated for the injured since entering practice in 1991, and established his own law firm in 1994.

Mr. Cantrell has authored a textbook on trial strategy and formerly taught trial advocacy as an adjunct professor at his alma mater, the University of Tennessee College of Law. He has also served as an administrative law judge for the state of Tennessee. He is licensed to practice in all state and federal courts of Tennessee, as well as federal appellate courts all the way up to the U.S. Supreme Court.

Dail is an active member of the Second Baptist Church in Clinton, Tennessee. His most recent book, Equal to the Task, is dedicated to his son, Benjamin, and the struggles he faced in the neonatal intensive care unit. 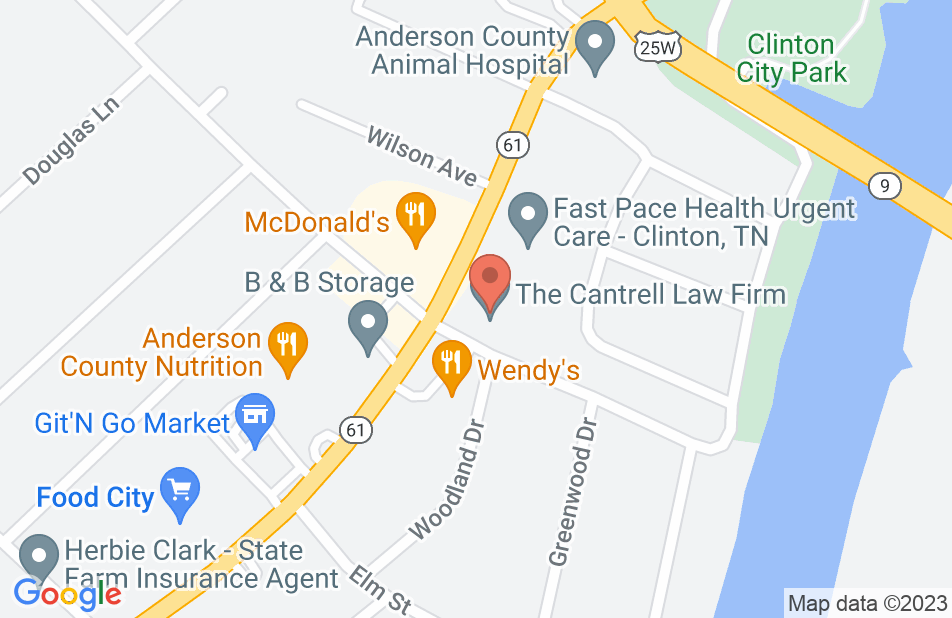 The Cantrell Law Firm is great!

The Cantrell Law Firm is great! When we thought all of our options were exhausted, Dail Cantrell helped us with a large electronics company. After about 18 months of them saying no to doing the correct thing, he made sure to get their attention by requiring them to. Thank you!
This review is from a person who hired this attorney.
Hired attorney

A Leader in His Field

I have had the pleasure of working with Dail Cantrell on several occasions. I have served as an expert witness for him, and have consulted with him on other issues. He is always a winner. Dail's expertise and knowledge are exemplary. He is always prepared for meetings, and always prepared for his court cases. He has a wealth of knowledge and expertise in Special Education Law.
This review is from a potential client who consulted with this attorney.
Consulted attorney

Custody battles are always a scary thing. My husband and I were very nervous about going to court for my son. However, once we started discussing our case, Dail Cantrell made us feel extremely comfortable and at ease. Dail demonstrated knowledge, passion for the law, and a true level of care for his clients. Dail gave us realistic expectations so that we weren’t going into it thinking we were getting too much or too little. Thankfully, we ended up getting even more than what Dail had projected. We highly recommend Dail Cantrell with any legal matter that may come your way. We truly and greatly appreciate all that Dail Cantrell and his law firm did for our family.
This review is from a person who hired this attorney.
Hired attorney

I have worked in the field of forensics for 20 years and therefore know many of the regional attorneys. When it came time to hire an attorney of my own for a personal case, Dail Cantrell was the person I wanted to represent me for my highly complex case. Dail’s years of experience, his exceptional intelligence, and his ability to think several steps ahead in case strategy, have been significant assets, just as I anticipated. I’m always amazed that he can remember even the smallest minutiae about my situation and at times I’ve joked that he knows my case better than I do! I have no doubt that I have saved time and money by hiring an attorney who is this invested in me, because he focuses on the unique needs of my case with precision, intensity, and accuracy. Most of all, Dail is kind, humble, and caring. He is a well-respected community member and he is incredibly easy to get along with. My interactions with other attorneys have I highly recommend Dail Cantrell and his entire team.
This review is from a person who hired this attorney.
Hired attorney

I called Mr Cantrell's office to get information regarding a probate case...since I am out of state and not familiar with Tennessee laws and what I was experiencing. Dail called me back and talked to me for quite a long time (more than 30 minutes) and explained everything to me. He stated that I could do certain things myself since we are at the end of an "estate case". I am so impressed with his kindness and knowledge, and I would highly recommend Dail Cantrell to anyone seeking legal assistance.
This review is from a potential client who consulted with this attorney.
Consulted attorney

Dail and (another attorney at his firm) Krysta fought unbelievably hard for us in our custody case. They displayed absolute passion, intelligence, and professionalism throughout the process. Every time we would have an appointment, I would always leave feeling at ease, knowing our case was in the right hands. They had our backs and kept us informed throughout the entire process. There was a recent TN Supreme Court decision that played a major role in our case, and Dail helped us navigate the nuances and provided invaluable insight into why and how the system works the way it does.
This review is from a person who hired this attorney.
Hired attorney

Dail Cantrell is a lawyer's lawyer

Dail Cantrell has represented me for many years. He is a hard working, smart, and ethical attorney. He is known in our community as the attorney you go to when you need results. He has had one of the top small law firms in East Tennessee for over twenty years. His firm is well respected, honest and will do you a good job.

We were looking for a law firm to handle a case against a tractor trailor who hit us. We knew the case would have to go to a jury because the insurance company was trying to say the wreck was my husbands fault. We interviewed 8-10 lawyers. We asked them who they would hire if we didn't hire them. Half of them said Dail Cantrell. He was honest, returned our calls, and won big. We learned that he had tried over 200 jury trials and had several verdicts of over a million dollars. If you want a lawyer that is not afraid of the insurance companies, and who will fight for you, Dail Cantrell is the lawyer for you.

When our family needed an attorney, we were directed by three different attorneys to the Cantrell Law firm. The result was a recovery that exceeded our expectations.

Dail is an exceptional attorney and fantastic litigator. He always is prepared and is willing to answer questions. I fully endorse Dail.

I endorse this lawyer. Known since he passed the bar exam. Excellent civil trial lawyer. I've no reservations.