Thomas is a founding member and managing partner at the firm of Parkerson | Santel, Pllc. He began the practice of law in the firm of Boston, Holt, Sockwell & Durham in Lawrenceburg, Tennessee with a focus on family law and personal injury. In 2005 Thomas took the opportunity to move to Murfreesboro and work for the District Attorney General's office prosecuting all types of criminal matters. As a prosecutor, Thomas obtained crucial courtroom experience handling matters as small as a public intoxication and as serious as a first degree murder.

After 6 years of prosecution, Thomas decided to re-enter private practice at Bennett, Parkerson & Bray an associaton of attorneys.  With his extensive prosecution background he began to focus on criminal defense. In 2014, with his childhood friend Tommy Santel and former prosecutor as well, they opened the firm of Parkerson | Santel, Pllc.  The firm then hired an associate, Travis Lampley, also a former prosecutor thus making Parkerson | Santel, Pllc the only firm in Rutherford County comprised of all former prosecutors that now handle criminal defense.

Althouth the firm also handles personal injury, insurance defense, family and domestic law including child custody, divorce and various other matters, Mr. Parkerson nearly exclusively handles only criminal matters, inlcuding but not limited to DUI defense, drug charges, and any and all misdemeanor or felony charges.

Thomas coaches his children in soccer, baseball, and basketball and above all enjoys spending time with his family. He received his undergraduate degree from the University of Tennessee at Martin in 1999 and his law degree from Mississippi College School of Law in 2003. He is licensed to practice in Mississippi and Tennessee and was admitted to practice before the United States Supreme Court in 2015. 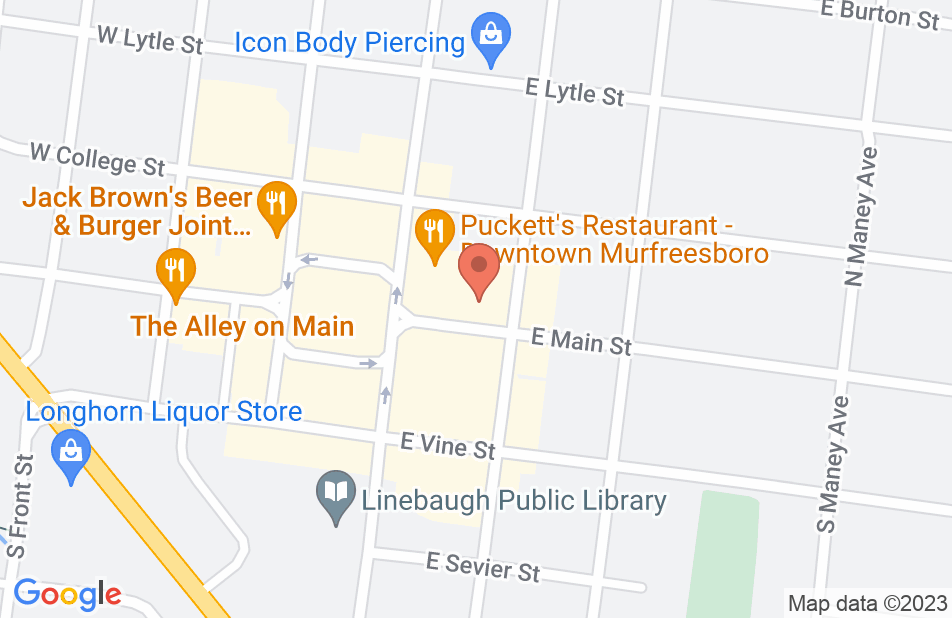 I hired Mr. Parkerson. In a vary dark time in my life. I knew after speaking with him on the phone. That he was the lawyer I wanted after Several consultations that day. He was upfront with me and told me the truths about my case. He didn't lie to me or manipulate his words so I would hire him. I felt comfortable with him immediately. My case lasted 8 months and he was there every step of the way any time I needed him or had any questions he was there. He knew what I was trying to do with my life and he believed in me. I could not have asked for a better attorney. I made a lot of mistakes when I was young thefore have dealt with a lot of lawyers, and I can honestly say he was the best and most professional lawyer I have ever worked with. The case ended with a way better outcome than I could have ever expected. He fights for his clients and would highly recommend him to anyone facing a criminal case. I can't say enough good things about him!
This review is from a person who hired this attorney.
Hired attorney

I live in the state of Wisconsin and needed someone to help me fight a case from years ago down in Rutherford county. I like you are right now skimmed the reviews of attorney's online. I came across Parkerson Santel and reached out to their offices. I had the honor of working with Thomas Parkerson. He was very professional and honest the entire time I worked with him. We did a lot of our conversing back and forth over the phone and through email. He never once filled me with false hope or claimed we could reach for the stars when we shouldn't. I informed Mr. Parkerson that my goal was to stay out of jail and to get the charge of theft under 500 expunged from my record. I also had a capias warrant out for my arrest in the state of TN. Him knowing that because I evaded this charge for 5 years that this would be a long shot. However, he knew it was not impossible. I did have to do my part in proving that I had indeed become a better person and that I had made a positive change in my life. I had a job hanging over my head because I was not able to pass the background check with Mis. Theft on my record. Thomas was amazing and in the end I did 24 hours in jail my charge was dismissed and is expunged from my record. I just recently had the opportunity of working with this wonderful group of people. They truly saved my life. I am back home with my children, I start my job April 1st and life is looking very bright. I also had the honor of having Travis another attorney in the office work on my case as well. He was just as honest and professional as Thomas was. Their employee's are extremely friendly and efficient. I am forever grateful for what you did for me.
This review is from a person who hired this attorney.
Hired attorney

Mr. Parkerson is an excellent attorney. I violated my six year state, for the second time. I violated with felony possession of schedule 1, felony possession schedule 6, maintaining a dwelling, and felony possession of paraphernalia. I knew I was facing prison time. Mr. Parkerson not only got my charges against me dropped, he also saved me from going to jail. I was sentenced to four years community corrections, and my state probation was reinstated. I have three young children, which I was horrified of loosing. I couldn't thank him enough for what he worked out for me, without him I know I would be in jail right now. I would recommend him to anyone. He is caring, and understanding!!
This review is from a person who hired this attorney.
Hired attorney

This man has changed my life for doing ten years and he has helped me through the roughest time of my life. He's family oriented and he fights for your rights no matter how long it takes. He is a good lawyer and I would always appoint anyone to him.
This review is from a person who hired this attorney.
Hired attorney

Thomas created our will, living will, and power of attorney. He took time with us to fill out the paperwork, review it with us, allowed us to consider important decisions related to these documents, clarified any questions or concerns we had, and gave us the original and copies to take with us. He was very professional, fast, kind, helpful, and friendly. Working with him was relaxing, which was very helpful while completing paperwork that is so personal. I would recommend Thomas to anyone seeking legal advice. He cares about other people, works hard, and is easy to talk with about personal issues.
This review is from a person who hired this attorney.
Hired attorney

When I called the office to set up an appointment, I found that Mr. Parkerson's office staff was very friendly. I had no problem getting an appointment fairly quickly. Upon arriving, I did not even have to wait long. Mr. Parkerson was very friendly and helpful. He was able to accommodate all my legal needs in a timely matter. I was also able to email him in response to questions I had. He responded rather quickly back to my email. I would highly recommend Mr. Parkerson. He is able to get the job done and does a great job at doing it. He is also very quick to getting back to you and completing your legal requests. Mr. Parkerson is also very personable and easy to talk to you.
This review is from a person who hired this attorney.
Hired attorney

My family and I could not have been more impressed by his skills both professional and personal. We needed an attorney for a sensitive family matter and he was extremely professional, understanding and made all of us feel like we were in the right hands--and by the way--we were. Couldn't recommend him enough. Would trust him with any legal matter in the future. A great lawyer and even better person.
This review is from a person who hired this attorney.
Hired attorney

This was a serious drug case. From the time that Mr. Parkerson took my case everything was explained to me thoroughly. I knew what the possibilities were and I knew the trial levels that I would potentially face. The case lasted over a year and was finally resolved this past week. Mr. Parkerson worked hard to help the prosecution see our side of the case and as a result of his diligence the charges were reduced significantly in the final judgement. I was very fortunate to have Thomas Parkerson as my lawyer.
This review is from a person who hired this attorney.
Hired attorney

Mr. Parkerson has been so helpful to us. He has represented us in court on multiple occasions and he has always been extremely knowledgeable, helpful and effective. I recommend him very highly. He has provided us with extremely useful information and help us settle all our legal matters. Our family is very grateful to him. Thank you Mr. Parkerson
This review is from a person who hired this attorney.
Hired attorney

Thomas made me feel better and more comfortable with my situation the entire time he was working my case. The odds were pretty much stacked against me in the beginning with no sign of anything remotely positive as an outcome but Thomas took his time with my case, paid attention to detail, was in constant contact with officials on options for me and really looked out for my best interest. I worked with Thomas for over a year and after all was said and done, he worked out an end result that was amazing. Other attorneys, I believe, would have given up, but Thomas recognized and even told me that I was a good guy that just had a bad break and he would keep working until he got the best deal possible and he did. I'm very thankful for all he did and I would recommend him to anyone who needs help with a legal situation. You will not be disappointed in his services.
This review is from a person who hired this attorney.
Hired attorney
See all reviews

I strongly endorse Mr. Parkerson. I've known him since he was a young prosecutor and watched his keen intellect and pursuit of perfection turn him into an elite trial attorney. If you have a brush with the justice system in Rutherford County, I would encourage you go contact Mr. Parkerson.

I endorse this lawyer. I have known Thomas for many years, and I respect and admire him. He is always willing to lend an ear to a fellow attorney for advice or assist in any manner. I know that he cares for his clients and works hard for them in every area he practices.

Thomas is as good an advocate for his clients as you will find anywhere. He is intelligent and fearless in the court room. His experience with the Rutherford County DA's Office taught him well.