Jordan received her Juris Doctorate from the University of Alabama School of Law. As a law student, Jordan was a member of the UA Trial Advocacy Team. She competed in the American Association for Justice National Trial Competition, and she received UA’s George Peach Taylor award for outstanding trial advocacy. Jordan also served pro bono clients in the UA Civil Legal Clinic for two semesters where she worked on cases in the areas of, family law, construction, landlord tenant law, and property law.

After law school Jordan accepted an associate position at one of the nation's leading plaintiff's firms where she worked on personal injury, workers compensation, complex litigation, mass torts, and environmental law. Moreover, while at this firm Jordan spear-headed the development of a new division in domestic relations law.

Jordan's hobbies include: choir and activities with her New Hinson Baptist Church family, trips to the beach and spending time with her family. 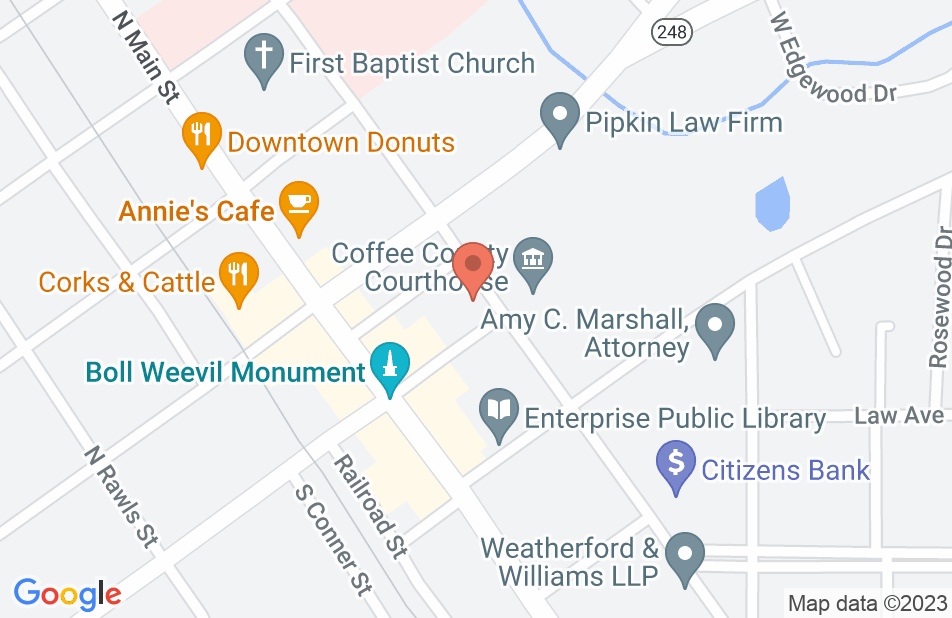 Amazing, Incredible, Patient, Excellent Communicator, Very Well Educated, Bull Dog, and the one you want on your Side!

Coming from a big city and having to hire a lawyer in another state, we truly lucked up finding the absolute best in South Alabama. We have had to deal with a few lawyers in the past and have to say that Jordan isn't just one of those normal lawyers. Jordan shows compassion, care, and is very passionate for her clients. Her education is no joke and her knowledge is absolutely incredible. Jordan absolutely showed this in the courtroom and had truly done all her homework beforehand. She knows the law and even advised the court many times of what the law states exactly in regards to our matter. Having to do all the pre-trial communication remotely was extremely easy and Jordan was open to any info we could provide her. She took that information and used it to truly build the best presentation and represent us as clients. Her follow up after the trial has been incredible and I have to say, we can't be anymore thankful that we lucked up finding one of the most incredible lawyers we have ever worked with. She truly plays to win! If you need a lawyer in South Alabama, this is the girl for you. She is a bulldog that actually cares. Her love for the job shows and it is evident in her work. No need to shop around, this is the lawyer for you!
This review is from a person who hired this attorney.
Hired attorney

Jordan Campbell is a phenomenal lawyer who helped me and my wife get through a difficult child custody trial. She fought for us and was a true professional during each trial. If it wasn't for Jordan me and my wife wouldn't have been able to relocate out of state with my stepdaughter. Thanks for your services and all you've done for us! We are forever grateful! 5 Stars and Above!
This review is from a person who hired this attorney.
Hired attorney

We needed an attorney for our daughter who was going through a divorce/custody battle. (much more to that) Anyways, we live in Washington state and hired Jordan with The Campbell Firm. Even with the distance, she she did an excellent job. She was great at communicating, answering questions, always prompt, professional and wasted no time. She really knew her stuff, she fought for our daughter and granddaughter and actually cared. We are so thankful for an excellent outcome and that the truth prevailed. Finding her was an answer to prayer. Thank you Jordan! !!!
This review is from a person who hired this attorney.
Hired attorney

Jordan has been an exceptionally profesional and attentive attorney; we couldn’t have asked for a better person. The matter of custody and family court is very personal and difficult and Jordan was nothing but sensitive to all of our concerns. Along with the attention to our worries, needs and wants she was also firm when we needed her to be. Hands down we would retain this attorney without a doubt if our family ever needed her again.
This review is from a person who hired this attorney.
Hired attorney

Jordan was very helpful and mainly persistent. If one plan of action didn't work, she always considered and tried another plan in order to get the results I was looking for. I would recommend her to anyone in need of a good lawyer.
This review is from a person who hired this attorney.
Hired attorney

Jordan is an OUTSTANDING LAWYER!!! She will fight for you and she cares so much.. My child was taken away from me, my ex-husband lied about me, (long story short), I filed for Divorce and wanting custody over my daughter.. So when it came to court, we where ready and she was A BULLDOG... We felt good about court and that i would get my daughter back and be divorced... So August 16th, I got the news that I GOT MY DAUGHTER back, Jordan was crying with me.. She is such a kind and sweet person.. I want to thank you Jordan for helping me thru this tough time and fighting for my daughter
This review is from a person who hired this attorney.
Hired attorney

We had great experience with Jordan Campbell. She prepared all the necessary papers , and did amazing job with court hearing arrangements. Even with international issues involved, the adoption of my son by my husband turned to be a very fast and smooth process! The interaction with Jordan was really productive and she was extremely responsive to all our questions.
This review is from a person who hired this attorney.
Hired attorney

Ms. Campbell contacted me and set up a consult. She was professional and listened to my case. I had no doubt that I should retain her services. My case was a divorce and I was stationed overseas. Ms. Campbell kept in continuous communication throughout. Even though there was a significant time difference her dedication never waivered until the case was completed. She fought for me and defended my rights. I would retain her services again in the future if needed.
This review is from a person who hired this attorney.
Hired attorney

She answered all of my questions, gave me more options I could have for my case, stayed very flexible with my schedule, always communicated with me. She was always very professional, and she did everything possible to make sure I had the steps ahead in my case. Because of her I was able to learn a lot of my rights as a mother that I didn't know I had. Would definitely recommend Jordan!
This review is from a person who hired this attorney.
Hired attorney

After an incident with a man slapping my son, I couldn't get any help due to the fact that I was not the primary parent. Mrs. Campbell found an avenue that led to his arrest and we are currently awaiting a trial for justice. And the greatest thing that came out of this case was me getting custody of my son. Mrs. Campbell has a very professional attitude and practice. I have heard a lot of great compliments on her as I have spoken to others about her. I would highly recommend her in any child's case...thank you Mrs. Campbell for all that you have done and I will remain a client of yours forever...
This review is from a person who hired this attorney.
Hired attorney
See all reviews

I endorse this lawyer. I have known Mrs. Campbell for several years and she is always a professional and zealous advocate for her clients. She is honest and can be trusted to do the right thing. Mrs. Campbell and I frequently represent opposing clients in a variety of cases. She is always very prepared and aggressively represents her clients well. I routinely refer clients to her office if I am unable to handle their case.