Mr. Alley graduated with honors from the University of Alabama, with a Bachelor's Degree in Political Science. He went on to attend and graduated from the University Of Alabama School Of Law. While still in law school, Mr. Alley clerked at the Tuscaloosa County District Attorney's Office, where he successfully tried several felony jury trials as a law student.

Based on his outstanding performance for the office while in law school, Mr. Alley was asked to join the Tuscaloosa County District Attorney's Office as a prosecutor. As a Deputy District Attorney, he tried dozens of cases before juries in Circuit Court and frequently represented the District Attorney's Office before the District Court. Mr. Alley also conducted Grand Jury proceedings and was personally responsible for cases ranging from murder to drug trafficking. It was in this position where he learned how to analyze legal issues from every conceivable angle, successfully argue to a judge, and, most importantly, persuade juries.

Shortly after joining the Tuscaloosa County District Attorney's Office, Mr. Alley was chosen to become a special federal prosecutor in order to combat gun violence. Mr. Alley served in this position for three years where he evaluated cases for federal prosecution.

Mr. Alley went on to work at the Limestone County District Attorney's Office where he was tasked with handling a wide variety of cases. He was personally responsible for handling tens of thousands of misdemeanor cases in District Court as well as hundreds of felony level cases in Circuit Court. Mr. Alley was primarily responsible for drug and narcotics cases in this position.

In addition to being a skilled trial attorney, Edward L. Alley has previously served as instructor at Alabama police academies. He has taught law enforcement classes with subjects ranging from DUI, the entire Alabama criminal code, and dealing with illegal searches by the police. He also has taught legal courses at the National Center for Explosives Research and Technology for the United States Bureau of Alcohol, Tobacco, Firearms and Explosives for the military and local, state, and federal law enforcement. He now uses his experience to provide vigorous representation on behalf of his clients.

In 2011, Mr. Alley was honored to serve as a Special Municipal Judge for the City of Athens, Alabama. He represents clients throughout Alabama, regularly appearing in the Circuit and District Courts of Limestone County, the Municipal Court of Athens, and the Municipal Court of Ardmore, AL. Mr. Alley is a member in good standing of the Limestone County Bar Association, the Alabama State Bar Association, the Bar of the U.S. District Court for Northern Alabama, and the Bar of the 11th Circuit Court of Appeals. 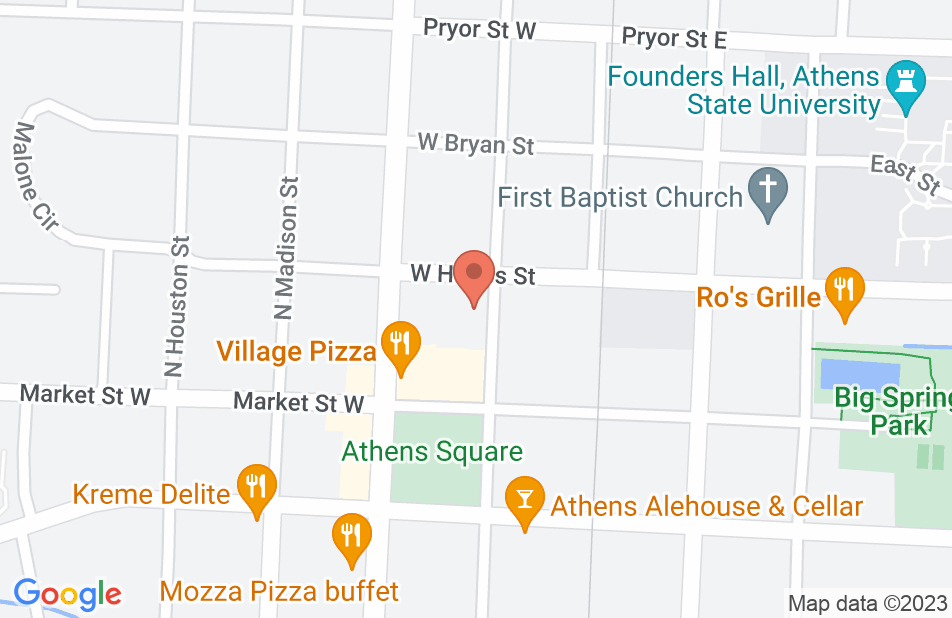 Never use anyone else

He’s the best!!!!! Met Mr Alley from being customer of my workplace so at first I was ashamed to admit I was in trouble, but after swallowing my pride I contacted him trough his website and was blown away when he responded back fast, and after business hours! This man is incredible he went above and beyond for me. Thank you! You have been a blessing to me and my family I can never thank you enough
This review is from a person who hired this attorney.
Hired attorney

MY FIRST CHOICE FOR AN ATTORNEY

He is very knowledgeable and also very personable. I was very pleased with his advice and the overall experience. He really put my mind at ease about a matter that was very concerning to me. He was very easy to talk to. I had talked with another attorney prior to seeing Mr. Alley and wasn't comfortable discussing these issues with him. Mr. Alley made me feel much more at ease to discuss everything I had questions about. I went for a consultation and he answered ALL of my questions and I feel that he went above and beyond a simple consultation. He was recommended to me by a friend that had hired him and was very pleased and could not say enough about his professionalism and knowledge. If ever I need to hire an attorney he would definitely be my first choice!
This review is from a potential client who consulted with this attorney.
Consulted attorney

Mr. Alley is a tremendous asset to the people of North Alabama in need of a criminal defense attorney. Having worked as a prosecutor, he has a great understanding of the process from both sides of the aisle. Combine that with his extensive expertise and the compassion he's has for his clients, and it is no wonder Mr. Alley is one of the most respected attorneys in North Alabama.