Michael is a natural teacher. He enjoys working with families buying or selling their home. He explains the contract language in listing agreements-The agreement between the consumer and the realtor which imposes many obligtions on the consumer which the consumer can usually negotiate. The agreement of sale provied by the realtor imposes many obligations on the consumer, but which the consumer may be able to shift to the other parties or not accept. This is why he prefers to meet with clients prior to their sigining any documents. HE takes this same approach of listening in helping people deisn their wills, powers of attorny, living wills, and other life and death plans.

Michael is equally comfortable trying a civil case before a jury, negotiating a complex business transaction, or drafting documents. After earning a bachelor’s degree in philosophy from Columbia University, Michael was a Melton Research Fellow while pursuing his PhD in philosophy at Ohio State University. In 1973, he earned a Juris Doctor from Case Western Reserve University and has been admitted to practice in Maryland. He has taught philosophy at Ohio State University and at John Carroll University. He is admitted to practice before several federal courts, including the Supreme Court of the United States, the Court of Appeals of Maryland, and all lesser courts in Maryland.

Michael's initial experience was in Cleveland with a boutique law firm involved with real estate transactions and a real estate litigation practice. In the mid-70s, he moved to Maryland to practice with the real estate group and one of the large Baltimore law firms. In 1975 Michael began his own practice in Baltimore County. In the intervening years he has developed a reputation as a seasoned transactional lawyer and trial lawyer with considerable experience in estate planning.

Michael has lectured and taught required continuing education courses to title insurance agents, real estate agents, and life and health insurance agents.  He has also taught and presented to the Association of Trial Lawyers of Maryland.

Over the years Michael has been associated with local charitable organizations and has served and continues to serve locally, regionally, and nationally. He was a recipient of the national Maasim Tovim award in 2015 from the FJMC. 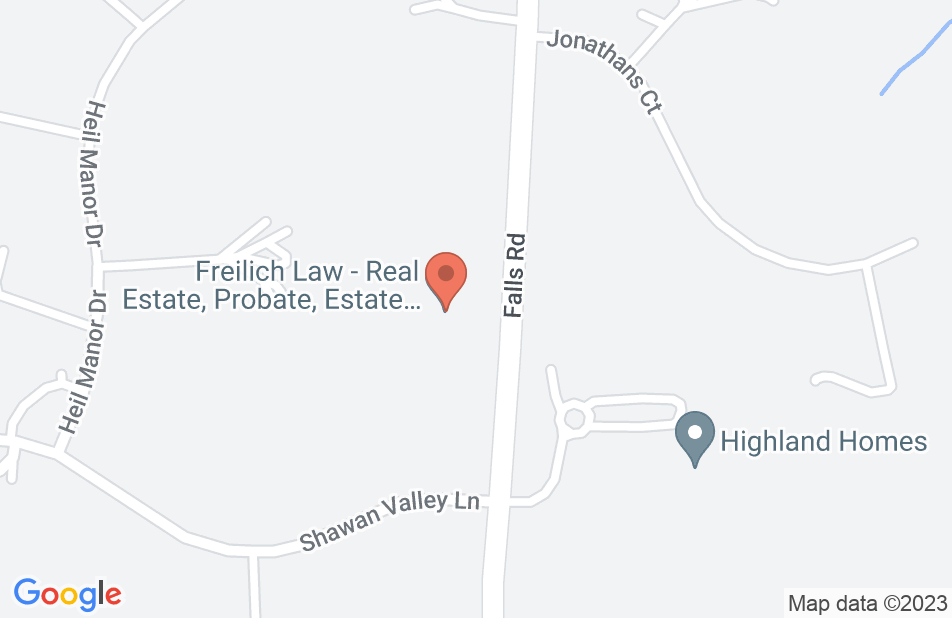 Michael Freilich Will “Have Your Back”

Michael Freilich has represented my interests through several difficult moments in my life. He assisted me in providing for the safety and security of my young sons as I divorced their father. I confess that I was kind of overwrought many times through that process, and Michael was more patient and kind than a lawyer should ever have to be throughout. I always, always, felt that he had my back and would ensure that it would be “okay” in the end. As it is. The kids and I are ok, with a huge “thank you” being owed to Michael for this result. Additionally, I was rear ended in a traffic accident, seriously injured, and without Michael’s help I would not have been able to navigate the maze-like insurance company process to receive the compensation I needed. Also, (and I respect this tremendously), If ever I have a legal question or a need that is not in his particular perview, he has always been resourceful beyond belief, sharing his broad scope of knowledge and contacts, helping me to find the best specific advocate possible. I have referred family and friends to Michael If they expressed the need for legal advice for years, and confidently recommend him to you now. Contact Michael Freilich; he will help.
This review is from a person who hired this attorney.
Hired attorney

We love dealing with Micael

We have used Michael for personal and business issues. I am impressed with his depth of knowledge of the law. The spectrum of issues that we have borough before him over the years he has either able to quickly reference the statue or put his hand on it. If it is not an area he is versed in he is extremely connected to the legal community that he has made good referrals to or brought on the right partner to help. Michael is always my first call.
This review is from a person who hired this attorney.
Hired attorney

knows the judges and the lawyers

A true legal scholar. In my experience he is a lawyer's lawyer. I send him my friends and he has served them well. As a lawyer myself, I always consult Michael on my tough calls.
This review is from a person who hired this attorney.
Hired attorney

Michael Freilich was able to resolve a serious legal problem that involved my sister. He had a catalog of resources to bring into play as he acted in our defense against attempts that were harmful toward her interest. My sister's husband is a post-World War II veteran. Since I needed the help of someone who was familiar with the rights and benefits available to both my sister and her husband, he made the necessary resources available to me. I needed a source of possible property financing for her home. He was able to put me in touch with multiple banks and loan officers who could and did assist me. Michael's interaction with other lawyers involved in the case have been superior and extremely beneficial to us. My review of Michael Freilich is based on his outstanding knowledge of the law and his many contacts and resources. The resolutions would not have reached the satisfactory end without his legal mind.
This review is from a person who hired this attorney.
Hired attorney

Michael is knowledgeable, caring and compassionate.His expertise allows him to explore various options with clients, helping to tailor an individual plan to meet the client's needs and goals. I highly recommend him.

I endorse this lawyer. Michael is a brilliant attorney, with a sharp and analytical mind. You could not ask for better

I endorse this lawyer. A lawyers lawyer. Brilliant. He. is a true scholar of the law.