Rick Jaklitsch is the founder of the award winning Jaklitsch Law Group, which has developed a reputation for providing effective legal counsel to victims of car, truck and train accidents throughout Maryland and DC. In more than 30 years in practice, he has helped thousands of people injured by the negligence of others. Last year, Rick was honored to be named Personal Injury Attorney of the Year in Maryland and Attorney of the Year by two different publications. He also has been recognized by the Daily Record as a “Leader in the Law”. In 2018, his firm received “Best Personal Injury Trial Law Firm” and “Most Outstanding Personal Injury Litigation Law Firm” in Maryland.The BIG DOG himself has seemingly won every possible legal award that relies on the vote of judges who have seen Rick in action, or lawyers who have opposed Rick in court.  When you meet Rick it feels as though you have known him forever. He has a way of making anyone feel at ease. It’s no wonder so many of his clients recommend him to their friends and family. He is the guy you want fighting the insurance company on your behalf.  While he is tough on adjusters, he treats his clients like family.

Rick was one of the youngest attorneys in the country when he was first honored by Martindale-Hubbell with their coveted “AV Preeminent” rating of Personal Injury Trial Lawyers.   That honor put Rick in the top 1% of lawyers nationwide, and he has won that prestigious recognition every year for the past 22 years.  Martindale-Hubbell calls this AV rating “the pinnacle of professional excellence earned through a strenuous peer review rating process.  It is the highest possible peer review rating in both legal ability and ethical standards”.

Rick has been honored by Who’s Who In American Law for over 24 years.  He’s been listed in the Bar Register of Preeminent Lawyers every year since 1995, and was one of the very first lawyers in the entire country to obtain a perfect 10.0 rating for legal ability by the online rating service of AVVO.com.  Rick has won “The Best Attorney Award” from Rue Rating’s Best Attorneys of America, and is prominently listed in the publication “Best Lawyers in America”.  The National Trial Lawyers Association has listed Rick repeatedly as a Top 100 Lawyer, and the American Trial Lawyers Association has listed Rick as one of their Top 10 Lawyers for 2010, 2011, 2012, 2013, 2014 and 2016.  The Trial Lawyers Board of Regent’s prestigious “Litigator Award” was awarded to Rick and The Jaklitsch Law Group, more than 1 million other lawyers who were considered for that amazing award.

Rick is also a member of the Million Dollar Advocate Forum and the Multi-Million Advocate Forum, which are called “The most prestigious group of trial lawyers in the United States”.  Rick has been honored with a National “Top Ten” Ranking, every year since 2013 by the Nation’s Premier Group of Personal Injury Lawyers, the National Association of Personal Injury Attorneys, and won The Daily Record’s preeminent legal honor, its Leadership in the Law award.

Rick has handled hundreds of cases resulting in six figure and higher awards for his clients, and has handled both multi-million dollar injury cases and has sued insurance companies for as little as $23 in unpaid personal injury protection coverage on behalf his clients.  No case is too big or too small.  Rick is licensed to practice in every single State Court in all 24 jurisdictions in the State of Maryland, all Maryland Federal Courts, as well as the United States District Courts in both Maryland and Washington, D.C.

Rick has been honored by Super Lawyers Magazine in both Maryland and in the District of Columbia every single year since Super Lawyers began rating lawyers in those jurisdictions, and won the “Top Attorney” Award in Washington, D.C., and the “Top Attorney” Award in the State of Maryland, and has been decorated as a top Personal Injury Trial Attorney every single year by What’s Up Magazine.

Rick has also been repeatedly honored for his non-legal work in our community.  Rick won the Prince George’s County Bar Association’s esteemed President’s Award for “outstanding contributions to the Bar and to the community,” and was named a “Make-A-Wish Star” by the National Make-A-Wish Foundation for Rick’s tireless fundraising on behalf of Make-A-Wish, including raising the funds  for eleven children to have their dying wish granted.

Rick has won the Terrapin Club Lifetime Giving Award, and sat on the Terrapin Club Board of Directors for almost 10 years. He served as President of the University of Maryland Terrapin Club, which provided scholarships for more than 700 athletes in 27 varsity Division 1 sports.   Rick raised millions and millions of dollars for University of Maryland athletes before he was appointed by Head Coach Randy Edsall to serve as President of the Maryland Gridiron Network, the fundraising arm of Maryland football.   Rick then raised millions and millions of dollars on behalf of that organization and those Maryland athletes.  He sat on the Board for Archbishop Spalding High School and on the Board of Directors for the Maryland State Athletic Hall of Fame.

Rick was appointed to the Judicial Nominating Commission by Maryland Governor Robert Ehrlich and has sat for numerous years on the Maryland State Bar Association’s Judicial Selections Committee, which interviews judicial applicants from every jurisdiction in the State of Maryland.

Prior to being a lawyer, Rick won the “Outstanding Leader of the Year” Award at the University of Maryland while an undergraduate, was honored by Who’s Who, and by Mortar Board, and was honored by Omicron Delta Kappa, the National Leadership Honor Society, which he led as President, and which Rick has continued to serve as a voting Alumni member for the past 36 years.

He is married (27 years and counting) to Judge Michele Jaklitsch of the Circuit Court for Anne Arundel County and is the proud father to Drew and David Jaklitsch. 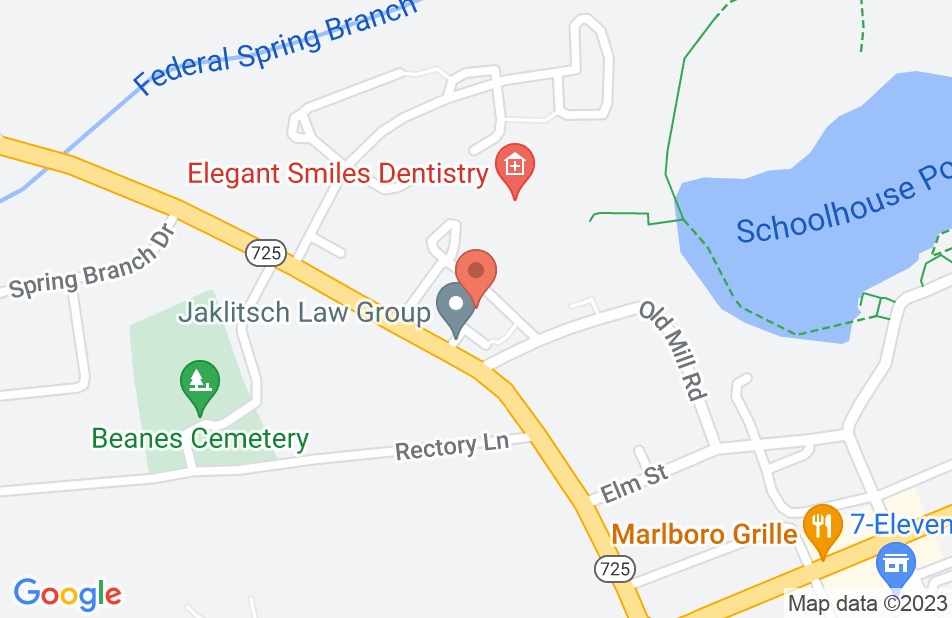 I hired Jaklitsch law group to represent me after I was rear ended while sitting at a traffic light for 23 seconds. Rick and his group were very professional and made me feel as if I was the only one they were working for. They did a great job and I was very pleased with the outcome. I would use Rick and his group again if needed.
This review is from a person who hired this attorney.
Hired attorney

Where do I start. The whole team is great. From day one they made me feel like family. Very welcoming. I would advice you to try them. I've never been unsatisfied. With the service or the money lol.
This review is from a person who hired this attorney.
Hired attorney

Best lawyer that I know

. Rick did a great job on my case and I would refer him to any of my friends or family to take care of there case when needed. Very thoughtful to me.
This review is from a person who hired this attorney.
Hired attorney

The Best Auto Accident Lawyer in the DMV!

Rick has represented me a few times, and I have always been completely satisfied with the service that the Jaklitsch Law Group has provided me.
This review is from a person who hired this attorney.
Hired attorney

Being in a car accident, no matter the situation is stressful! The Jaklitsch Law Firm, specifically, Rick Jaklitsch (aka, “The Big Dog”) and his team were the answer to my prayers! They were extremely professional and courteous. They addressed my needs expeditiously and were very thorough. Rick and his team were genuinely concerned for my health and welfare—from handling my injury treatments to my court case, they were AMAZING!!! I highly recommend them!
This review is from a person who hired this attorney.
Hired attorney

They are the best lawyers in Upper Marlboro. If your ever in an car accident I suggest you call Jaklitsch Law Group they worked had for me and I was very satisfied with my compensation. You can’t go wrong with them!
This review is from a person who hired this attorney.
Hired attorney

I was involved in a rather bad accident in 2016. I contacted the Jacklitsch law group for advise on how to proceed. They were courteous and very professional. They took quick action to ensure I was taken care of. I did not have to deal with anyone except their expert staff. Which I have to say are great. Any time I had a question or just needed to de stress they were there for my family and I. I could not have had a better experience. Thanks to Rick (Bigdog) Jacklitsch and his team for an excellent job well done.
This review is from a person who hired this attorney.
Hired attorney

Rick Jaklitsch’s Legal knowledge is unmatched! Unheard of! When he represented me in court I felt protected, I felt like I was in good hands and you know what? I was! I got a bigger award than I expected and all because Rick knows what he’s talking about!! Way to go Team Jaklitsch!
This review is from a person who hired this attorney.
Hired attorney

Rick Jacklitsch and his associates provided the absolute best quality of service on my case. Constant attention and follow up, keeping my best interest in mind at all times. From my injury treatments to handling the case they were phenomenal! I would recommend them to ANYONE, ANYTIME!
This review is from a person who hired this attorney.
Hired attorney

During a time of extreme stress, including Post-Concussion symptoms Rick and his team of professionals took the entire legal/medical issue off my plate and emphasized that my job was to get healthy. The team delivers as they promise. 5 stars.
This review is from a person who hired this attorney.
Hired attorney
Rick Jaklitsch's response: Thank you Mr. Hoffman. It was our pleasure and honor to work with you.
See all reviews

I had the privilege of interning for Rick while in college. His knowledge of the law and the level of respect he demonstrates to his clients, the Court, and his colleagues is unparalleled. My experience with Rick directly influenced my decision to become a trial lawyer.

Stephen Ball, Lawsuits and disputes Attorney on May 17, 2013
Relationship: Fellow lawyer in community

I endorse this lawyer's work. We refer all our auto accident litigation in the District of Columbia to Mr. Jaklitsch. He is known througout Maryland and DC as one of the top litigators in his field of personal injury. Mr Jaklitsch is a fearless litigator who does not back down to the insurance companies. He has obtained numerous "big" verdicts for his clients in trial.