Nick began his legal career in 1986 by serving as a Deputy County Attorney with the Onondaga County Department of Law, where he prosecuted child abuse and neglect cases. He then went on to serve for 15 years as an Assistant District Attorney with the Onondaga County District Attorney’s Office. During his tenure as an Assistant District Attorney, Nick prosecuted general felony cases, violent felony and career criminal cases, as well as narcotics cases. He served in the the Homicide Bureau for 11 years and also served as Chief of the White Collar Bureau. While in the Homicide Bureau, Nick investiagted and prosecuted over 100 murder and death penalty - eligible cases.

Nick left the District Attorney’s Office in 2004 as a Chief Assistant assigned to the Homicide Bureau.

In 2001, Nick served as a Syracuse City Court Judge, during which time, among his other duties, he initiated and presided over Syracuse Community Court.

In 2004 he joined the Syracuse law firm of Costello, Cooney & Fearon as Special Counsel, where he specialized in Family Law, Criminal Defense and Insurance Defense.

In 2007, Nick resumed his work as a prosecutor when he joined the New York State Attorney General’s Office, Criminal Prosecutions Bureau. As an A.A.G., Nick coverd an approximate seven county Central New York Region and concentrated primarily on the investigation and prosecution of white collar, financial and environmental crimes.

In 2015, Nick left the Attorney General's Office and joined the firm of Green & Brenneck, in Syracuse, where he specializes in all aspects of criminal defense, including homicides, major felonies, white collar, DWI and Vehicle and Traffic matters. Nick practices in all counties in New York and is admitted to practice in United States Federal Court, Northern District of New York.

In July, 2018, Nick opened his own Criminal Defense law firm in Syracuse. His practice includes all aspects of criminal defense, ranging from simple traffic tickets to homicides.

In addition, he serves as Chairperson of the Criminal Law Section, Membership Committee and Animals and the Law Committee of the Onondaga County Bar Association. He is also the Director of the O.C.B.A.'s Volunteer Advocate Lawyer in Animal Abuse Court (V.A.L.A.C.) Program. In 2014, Nick served as the President of the Onondaga County Bar Association.

In December, 2016, Nick received the American Red Cross of Central New York's "Real Heroes Award" for his work with the V.A.L.A.C. Program.

Nick’s community activities include serving as President of The Friends of Schiller Park and serves on the Board of Directors of the Central New York Animal Abuse Task Force and P.E.A.C.E., Inc., He has served as Chairperson of The Columbus Day Parade Through Little Italy, and has coached soccer at the Eastwood Soccer League, and basketball at Our Lady of Pompei School, in Syracuse. Nick has also served as the host of the radio show “Music D’Italia.”

Nick is the proud father of his daughter Elizabeth, a Senior at Oswego State University, son Joe, an engineer for SONY in Troy, Michigan and three rescue Pit Bulls, Domino, Tyra and Aphrodite. 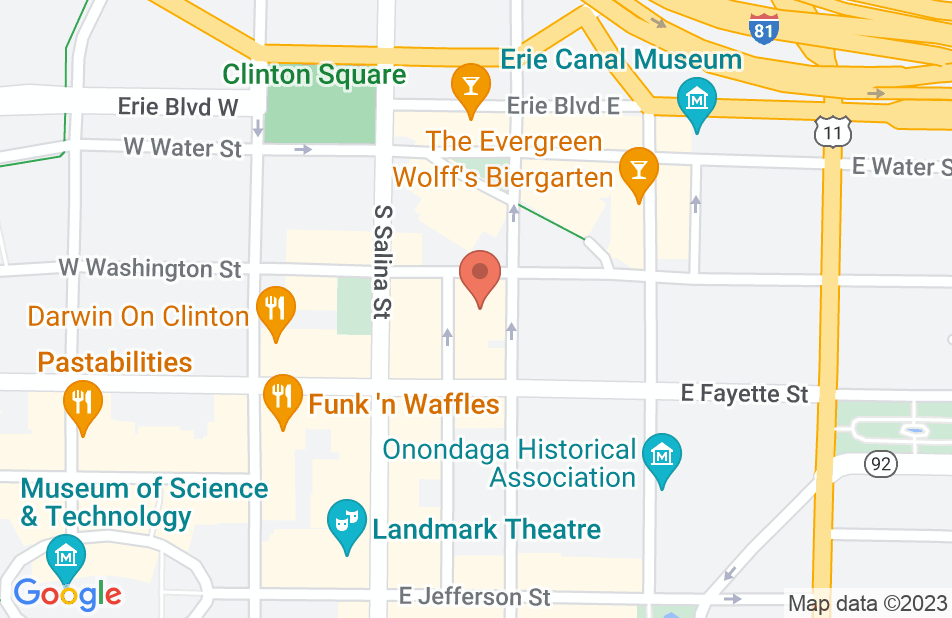 Nick DeMartino is a grade A attorney. When you go to court you want a lawyer who is thoroughly prepared to argue the facts of your case AND get you the best results possible. Nick represented me on a case and I had a favorable outcome on some serious charges. I would recommend him to anyone that is in a legal jam and serious about getting a lawyer.
This review is from a person who hired this attorney.
Hired attorney

One of the greatest in the area

Nick has been representing me for almost 3 years now. He has defended me better than I could have defended myself. I took what I said to him and he ran with it every time. As long as your honest with him, he will be honest with you. If your truly innocent he will fight for you till the bitter end. I couldn't be happier with Nick. I feel blessed to have been put in his good graces
This review is from a person who hired this attorney.
Hired attorney

Saved my Life, Career and dignity.

Attorney Nick DeMartino’s legal representation not only saved my career but it most importantly saved my life. He never gave up on me even when I screwed up. I had started to lose hope in life and the only thing that kept my hope alive was Mr. DeMartino and knowing that I had the best attorney possible. I can’t thank him enough and he will always have a special place in my heart. If you need an attorney to represent you he is the best when it comes to criminal law and I thank him from the bottom of my heart.
This review is from a person who hired this attorney.
Hired attorney

Nick worked tirelessly to get the charges against me dismissed. When the DA offered a plea deal which was not agreeable by me... Nick stuck by me and after 4 appearances and several defense arguments presentted.... we achieved the dismissal I was looking for. Nick is well prepared, articulate and has great presentation skills.... It is very apparent the judges respect and admire his experience and service to the community for almost 40 years! I would highly recommend Nick when you need a credible formidable advocate!
This review is from a person who hired this attorney.
Hired attorney

I had Nick on the case that I had No way out of no lawyer could help me every lawyer said I was going to jail for a long time with Mr. DeMartino’s capabilities and his good investigation skills he was able to get me out when no one else could do it the most friendly the most honest lawyer I have ever met he is the best around if you need your case done and done right and done timely called Nick he is the best without a doubt
This review is from a person who hired this attorney.
Hired attorney

Mr. Demartino was a fantastic lawyer. He helped me out tremendously in a DWAI case. He was helpful in both legal and personal advice regarding my situation. I would recommend him to anyone regarding any legal matter, as I’m sure he’s just as precise and efficient in every case he takes on.
This review is from a person who hired this attorney.
Hired attorney

He is a very good laywer had him for a couple of cases and he got me a great deal would highly recommend him
This review is from a potential client who consulted with this attorney.
Consulted attorney

To begin with, this scale only allows 5 stars but he and his work easily surpass a 10+ rating. I engaged Mr. DeMartino - on several occasions - to address overdue vehicle infractions, one was over 6+ months late while the other was almost a year; since I didn’t realize I was (almost) additionally charged with AUO. He didn’t “meet expectations”, he surpassed them on every front. The characteristics he embodied: extreme professionalism, concientiousness, drive and focus, dedication and understanding, and intelligence - all roles into one. And these are just a few. Furthermore, he actually cared very much not only about my infractions bit of me. He treated me as if he had no other clients or responsibility but me. He wasn’t only calm and collected but was also compassionate. He regularly and proactively communicated even following up when I didn’t address something I was supposed to and when I wasn’t getting him the information and payment of my associated fines. Further, he dropped everything to speak/meet with me, again treating me like I was his only client. And the result? My he worked and plead down my infractions to a negligible almost irrelevant extent. Complete satisfaction on my part. I don’t believe there’s another person, much less such an intelligent and experienced attorney, who could encompass and exceed characteristics of this nature.
This review is from a person who hired this attorney.
Hired attorney

I was being charged with manslaughter -1 and assault -2 and looking at up to 25 years in prison and Nick was my defense attorney, I was recently acquitted. Nick kept me updated on everything going on with my case both while incarcerated and out on bail. Nick is very professional and knows what he’s doing and very good at explaining if you don’t fully understand something. He was also very supportive and reassuring during times when I felt I had no hope, he helped lift me back up and look at the positives in my case. Nick always asked how I was doing and if I was alright and also asked how my family was doing during these tough times. Nick is very straightforward and doesn’t keep anything from you. I am very thankful for Nick and everything he’s done for me. Overall he is an awesome and caring person! I would highly recommend him!!!!
This review is from a person who hired this attorney.
Hired attorney

I WAS CHARGE WITH CRIMINAL POSSESSION OF FORGE INSTRUMENT,AND A SLEW OF OTHER CHARGES LOOKING AT A MINIMUM TWO YEARS IN GENERAL THE COURT SYSTEM CAN BE TRULY UNFAIR BUT WHEN YOU HAVE A LAWYER THATS NAME NICHOLAS .J.DEMARTINO, IT,S ONLY ABOUT MASTERY EVERY STEP OF THE WAY ,HE TOLD ME HE WILL GET ALL CHARGES DISMISS AND HE DID ,ITS LIKE HE WAS THE JUDGE AND PROSECUTOR AT ONCE I WILL RECOMMEND NICK TO ANYONE I KNOW.
This review is from a person who hired this attorney.
Hired attorney
See all reviews

Nick is one of the very best lawyers in New York State. His practice is 100% dedicated to helping those accused of crimes. He is the hardest worker I know. He has experience that is almost unmatched because he has been a homicide prosecutor, a judge and a defense lawyer. If a member of my family was facing very serious criminal charges....I would tell them to call Nick.

I strongly endorse Nick DeMartino. I have known Nick for eight years, both in his capacity as a prosecutor and a defense attorney. Nick is a highly skilled, knowledgeable attorney who always puts his clients' interests first. He is well-respected amongst judges, prosecutors and fellow attorneys in the local legal community. I do not hesitate to recommend and endorse Nick DeMartino.