Victor Fusco, Esq., is one of the founding members of Fusco, Brandenstein & Rada, P.C., established in 1978. The main focus of the firm’s practice is in the representation of injured and disabled wage earners in claims for Social Security Disability Insurance Benefits, Workers’ Compensation and related matters, such as Long Term Disability (group and individual) and NY City and State Employee Disability Pensions, and more recently Veterans Disability Claims. The firm also offers a menu of general legal services plans through various unions and organizations. The firm, headquarted in Woodbury has offices in Commack, Medford, Kew Gardens, Uniondale, Bronx and Manhattan.

Mr. Fusco received his undergraduate degree from Hofstra University in 1972, and his law degree from Brooklyn Law School in 1975.

Mr. Fusco is a frequent lecturer in the areas of Social Security Disability, Workers’ Compensation and Media Relations and Communications. He has lectured for such institutions as the New York State Bar Association; The Practicing Law Institute; the New York Injured Workers’ Bar Association; the National Organization of Social Security Claimants’ Representatives; the Cornell School of Industrial and Labor Relations; The Labor-Management Center, National Business Institute, Sterling Educational Services, the New York Committee on Occupational Safety and Health (NYCOSH) as well as various unions and community organizations. His columns appear in numerous union newsletters and local newspapers.

Since March of 1999, he has been the host of “Labor Lines” a program about working men and women and the organizations that represent them, heard twice weekly on WGBB 1240 AM radio, Saturday at 6:30 PM and Thursday at 7:00 PM (webcast on www.am1240wgbb.com). He has hosted several other community based radio programs. He recently began a monthly television program “Four Village Law Talk” on Four Village TV, a Government Access Cable Channel servicing the villages of Floral Park, South Floral Park, Stewart Manor and Bellerose.

He is a member of the Advisory Boards of the Long Island Occupational and Environmental Health Center, The Longs Island World Trade Center Medical Monitoring and Treatment Program, the Lupus Alliance – Long Island/Queens Affiliate and The Labor-Management Center, Inc. He is a member and former director of the Foundation for Sight and Sound, and has been frequently called upon to emcee their annual "Blind Wine Gala." He served as counsel to the Long Island Crisis Center. He is now counsel to the Unsung Heroes Helping Heroes, Inc., an organization advocating for the interests of disaster and recovery workers from Ground Zero and other disasters. He serves on the Workers’ Rights Board of Jobs with Justice Long Island, and was honored by that organization in August 2006.

In the area of civic responsibilies, he serves on the Zoning Board of Appeals in Lake Grove, NY of which he is the Chair and is a member the Suffolk County Charter Revision Commission.

He has received awards from the LI Federation of Labor, the Lupus Alliance, The Foundation Fighting Blindness, the A.M.T. Children of Hope Foundation, The March of Dimes Salute to Labor, Congressman Steve Israel, the New York State Assembly, the Suffolk County Corrections Officers’ Association, CSEA Local 880, the County of Nassau, the Town of Oyster Bay, the Town of Hempstead, the Nassau County Police Department and the County of Suffolk, and  was named 2008 Lawyer of Distinction by the Institute of Jewish Humanities.

In his "spare" time Vic relaxes by playing bass and singing in the Roadhouse Band, a country western band. 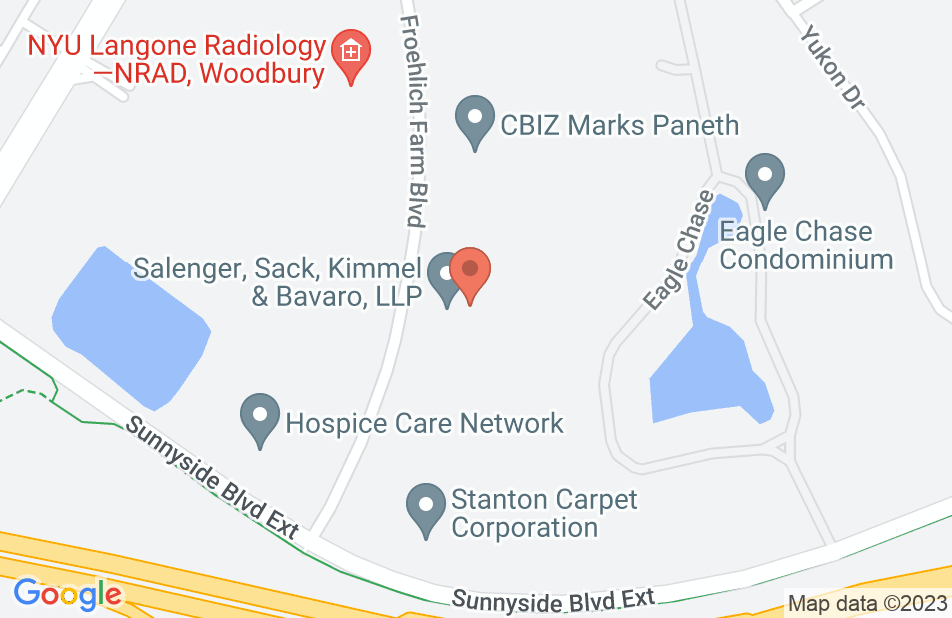 Mr. Fusco was more help in just a few conversations threw emails than the lawyer I had representing me. I am so please at the way he suggested information and things I should do to help My case. He is a great person / lawyer and he gave me very complet and important information and suggestions as what I need to do. He was a knowledgeable source of information which I needed desperately. I was totally lost and about to give up the fight I have fought for many years. I can not say enough good things about Mr. Fusco. He is awesome and I'm still holding on thanks to him. Simply put... A pleasure corresponding with him.
This review is from a potential client who consulted with this attorney.
Consulted attorney

The greatest endorsement I can give for Vic Fusco is that I have entrusted my own clients to him on numerous occasions. I have had the good fortune to know and work with Mr. Fusco for over a decade and have always been extremely satisfied with the work performed by him and his office on my clients' behalf. I strongly recommend Mr. Fusco for Workers Compensation and Social Security/Disability cases.

I met Mr. Fusco in 1992 and worked for him for over 7 years. He is one of the most respected attorneys and influential attorneys in the area of Social Security Disability law and workers' compensation law in New York. He is tireless advocate with an unwavering compassion for his clients. Over the years, I have continued to have occasion to work and my respect for Mr. Fusco has only grown. I would strongly endorse Mr. Fusco and his firm.

I endorse this lawyer. I have known Vic for 25 years. He is a terrific lawyer. Not only does he do a fantastic job for his clients, but he also teaches the fine points of ssd law to other attorneys. He has also played an important role at NOSSCR, the premier organization for SSD attorneys. When I need a SSD attorney in NYC or Long Island I use Vic Fusco. He is the best.

I have known Victor for over 15 years. Victor is tireless in his pursuit of excellence as a Workers Compensation / Social Security Disability lawyer. He is an expert among experts in his field. He will stop at nothing to find a way to advance his client's case within the bounds of the law. Victor combines this skill and knowledge of the law with an equally zealous commitment to service, making client satisfaction at all levels a top priority of his firm. There is no question that Victor is a true professional in everything he does. I endorse him wholeheartedly.

Victor is a prince of a lawyer and a great teacher. He has handled many of my clients and made their lives easier and better. He has a true love not only for the law but for people in the trades. I have referred not only my clients to Victor but my family as well. Besides his having tremendous skills as an advocate and counselor, his staff is excellent. They are up on the cases and they are very supportive of people who are trying to recover from injury. Victor fights hard so that every client gets his fair share (or better) from the Worker's Compensation Board. I highly recommend Victor, his firm and his work.