Rosemarie Arnold was born on June 9, 1962 to Iris Arnold, a school teacher, and Dr. Murray Arnold, an obstetrician gynecologist. Her dad passed away when she was 5 years old, leaving her mother to raise their 6 children in Washington Heights, New York. She graduated with honors from the Bronx High School of Science in 1979, where she was the captain of the women's swim team. In 1983, at age 20, Arnold graduated from The State University of New York at Binghamton, then headed to Brooklyn Law School where she was a member of the Moot Court Honor Society and captain of the negotiating team.

In 1989, feeling unfulfilled with defense litigation, Arnold founded The Law Offices Rosemarie Arnold, (a firm devoted to the representation of injured victims), in a one room office in Englewood Cliffs, New Jersey which she shared with her paralegal Mary Mazza. Thirty years later, Arnold has built her law firm into one of the largest and most successful plaintiffs firms in Bergen County.

Between 1989 and the present, Arnold has recovered hundreds of millions of dollars in settlements and judgments for her grateful clients and succeeded in scores of high profile cases.

Arnold has been called upon to give her legal expertise to the NY Times, Daily News, New York Post and Wall Street Journal. She has also appeared as a legal expert on Good Morning America, the Today Show, The Early Show, Maury Povich, NY1, ABC, NBC, CBS and FOX News, Inside Edition, and Extra TV.
Notably in 2013, Arnold was named EXTRA TV’s legal correspondent.

Arnold has been bestowed with many accolades and honors including:

In 1995 Arnold was certified by the Supreme Court of New Jersey as a Certified Civil Trial Attorney, at the time, she was the youngest attorney ever certified in NJ. She has been re-certified to present day.

Arnold sits on the Board of Trustees of the Rebeka Verea Foundation, a non-profit corporation founded in the memory of a 17 year old client of Arnold’s who was killed on the night of her high school graduation, while a passenger in a speeding car. Arnold is an active member of the Foundation, traveling with it’s founders to high schools in New Jersey giving presentations on the dangers of speeding and drunk driving to teenagers. Arnold also sits on the Board of Trustees of the Leonard Melfi Foundation.

Arnold also sits on the Board of Education of Saddle River, a position she was elected to in 2006.

Arnold has been profiled in several periodicals including New Jersey Super Lawyers, Social Life Magazine, The Bergen Record and The Town Journal.

Arnold has made recent headlines for her extraordinary results on behalf of sexual abuse victims. 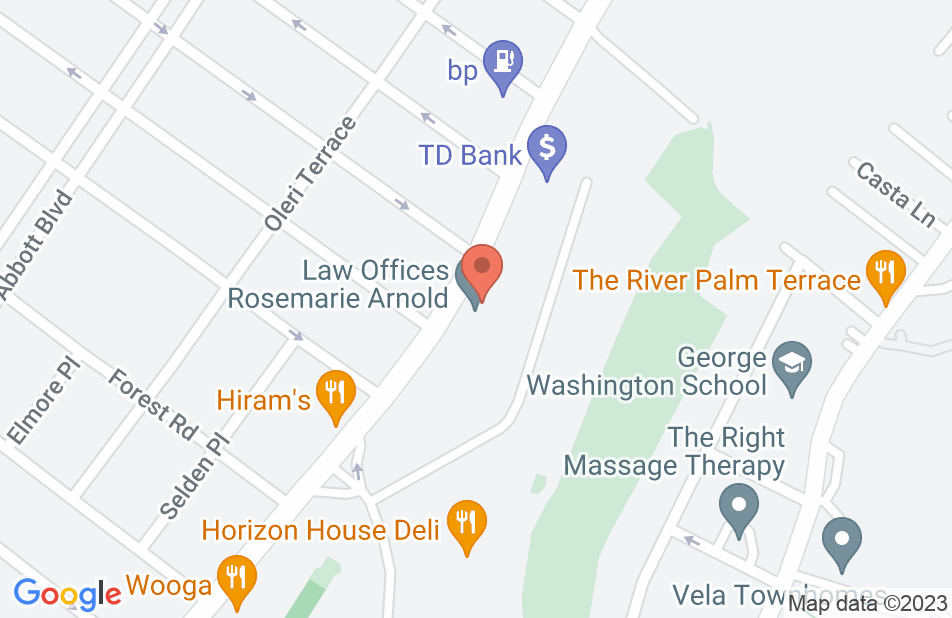 They will fight for you

Our case, in some respects, was uncharted waters for Maria Luppino and Sheri Breen. Their knowledge, talent, support and compassion were exactly what we needed for our case. They will fight for you. We saw that all important passionate quality the first day we met with Rosemarie and Maria. From day one they were committed and intent on obtaining compensation for our son. We will always be grateful.
This review is from a person who hired this attorney.
Hired attorney

Sheri Breen at Rosemarie Arnold is the absolute best... real talk! I had a difficult case due to preexisting conditions and Sheri went after every possibility to win me a very handsome settlement. Sheri was recommended to me, and I am recommending her to you. You want to win?! Go see Sheri Breen at Rosemarie Arnold.
This review is from a person who hired this attorney.
Hired attorney

A short and simply thank you sent to Rosemarie Arnold

Hi Rosemarie, this is just a short letter, filled with a huge thank you, to you and your amazing staff. Ever since the first day we met, my wife and I were made to feel some what better, at what was simply the worst times of our lives. We explained the event that caused us more emotional & phycological pain than we had ever experienced before, the loss of our daughter. You and your staff appeared to stop what you were doing and focused on us and the circumstances and causes of why we came to speak to you, just as a friend of a friend said you would. You asked for nothing but the truth from us and gave us everything in return. You set expectations very accurately from day one, promising nothing but to do the best you and your staff could do for our family. You gave us time lines that proved point on. Your entire staff treated our family professionally with empathy and respect from day one and throughout the process. We don’t want to mention names because we fear we may leave someone out, but every phone call, every email, every message left was responded to promptly and with clarity. Honestly I feel the out come of this case would have been so different without you and your staff. Some times my wife and I feel a thank you is not enough to express our gratitude. This is is one of those times. Thank you so much and please express our thankfulness to your staff.
This review is from a person who hired this attorney.
Hired attorney

An amazing experience during a tough time

Sheri Breen and her paralegal Marcia Carver were amazing at supporting my husband and I though a very emotional time for both us and our son. This was the first time we have ever needed to open a case. They were extremely supportive, responsive, comforting, and provided amazing guidance/insight through the entire process. They made the process very smooth. Sheri Breen got us a very successful outcome which we will forever be grateful for. I highly recommend them to anyone looking for legal support. They are the absolute best!
This review is from a person who hired this attorney.
Hired attorney

Nothing but class, special thanks to Natalie and Rosa who were my 2 main points of contact. A very negative incident in my life (struck by car, knocked unconscious, ambulance, ER, numerous injuries...etc.) was alleviated immeasurably. Settlement was more than generous but what I appreciate the most is all the support and care. Whatever astronomic medical bill just hand it over to them, simple. I did very little. I would have been at a loss without their help.
This review is from a person who hired this attorney.
Hired attorney

Rosemarie Arnold has represented my family and me for years. She is bright, agressive, highly competent and kind. We recommend her to everyone. And we love seeing her on TV.

Rosemarie is awesome! She worked her butt off on my case and won after 3 other lawyers told me I have no case. I love her. She saved me.

she is a bulldog

everyone says she is the best attorney in New York and New Jersey. I know this for sure. Strong, aggressive, very intelligent, well prepared, no fear.

Rosemarie Arnold is easily the best personal injury trial attorney in the NY metropolitan area. Unlike other lawyers, who will advise you to settle for a quick buck, Rosemarie has a 30-plus-year record of trying cases (and winning). Don't settle for less.

Rosemarie is an amazing attorney who truly cares for all of her clients. She will fight for each and every client to ensure they obtain the best possible outcome. If you are injured, you should definitely choose Rosemarie Arnold!