Mr. Perkins has been practicing law in Connecticut for more than 25 years.  During the last 18 years, his practice has focused on personal injury litigation on behalf of injured people.  He has handled thousands of cases for people injured in motor vehicle accidents, for those injured in fall-down accidents, for people attacked by animals, for children poisoned by ingesting lead, for those hurt by defective products, for people whose insurance companies have not acted in good faith, for elderly people neglected or mistreated by nursing homes and for many other people injured due to the fault of others.  He has tried numerous cases and has recovered millions of dollars on behalf of those whose lives have been adversely affected through no fault of their own.  He has served on several bar association committees and devotes many hours each year to continuing legal education.  Mr. Perkins is a member of numerous bar associations, is admitted to practice in Connecticut, New York and the Federal District Court for the district of Connecticut as well as before the Second Circuit Court of Appeals.  Mr. Perkins graduated from the New York University School of Law.  He is the managing partner of his firm. 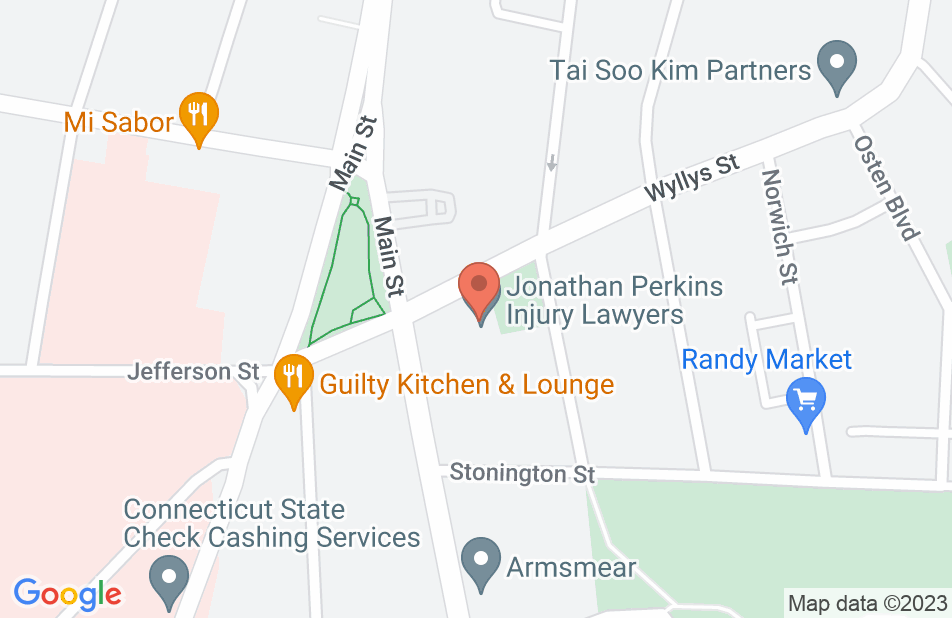 The entire process was totally stress free. They did everything for me, no worries about being able to afford an attorney since they take a percentage of your settlement. It was very easy, all I had to do was answer some questions. Then I was able to focus on healing from my injury and moving on. This entire process was so easy I still can’t believe it’s over. I had my settlement in less than a year. highly recommend this attorney and team.
This review is from a person who hired this attorney.
Hired attorney

Kevin Blake is a dedicated attorney, with the help of Delphina J.B. Richard i had a very positive experience. Thank you, FR
This review is from a person who hired this attorney.
Hired attorney
See all reviews

I endorse Jonathan. He is a highly skilled attorney that is well respected in the legal community.

Attorney Perkins consistently provides competent, compassionate representation to those injured by the mistakes of others.

I have worked extensively with Jonathan and his staff and have always found them to be professional and effective.

I endorse this lawyer. Attorney Perkins cares deeply about his clients. He is dedicated to getting results for his clients.

I endorse this lawyer. Attorney Perkins is a very aggressive lawyer who takes very good care of his clients.

I endorse this lawyer. Jonathan Perkins is the Best Personal Injury Lawyer in our legal community!

I endorse this lawyer. Jonathan is very attentive to his clients and they much appreciate the results he obtains. His staff is very helpful and knowledgeable.