Michael Perillo is in his 37th year of practice as an attorney. He began his career in 1983 as an active-duty JAG Officer in the U.S. Navy. In that capacity, his duties included the prosecution of Courts-Martial. He also served as Staff Judge Advocate (legal counsel) to the Commanding Officer of the Service School Command at Great Lakes, Illinois. At the time, that command was one of the largest (by population) in the entire U.S. Navy. Mr. Perillo was awarded the Navy Commendation Medal in 1987 for meritorious service as a JAG Officer.

After leaving active duty in 1987, Mr. Perillo served as a Senior Assistant Public Defender in the Lake County, Illinois Public Defender’s Office. His next position was as a Senior Assistant in the Office of the Lake County (Illinois) State’s Attorney, In these positions, Mr. Perillo defended and later prosecuted all manner of felony offenses and appeared in the Lake County Judicial Circuit (Waukegan) on a daily basis. At Noonan Perillo & Thut Ltd., Mr. Perillo concentrates his practice in personal injury and plaintiff’s nursing home negligence and is available to practice in civil litigation, criminal and military criminal matters. He is currently in his 28th year with the firm. Mr. Perillo is rated as an “A/V Preeminent” attorney by Martindale Hubbell, the highest recognition awarded by that organization.  He was selected for inclusion in "Illinois Super Lawyers" for 2020. 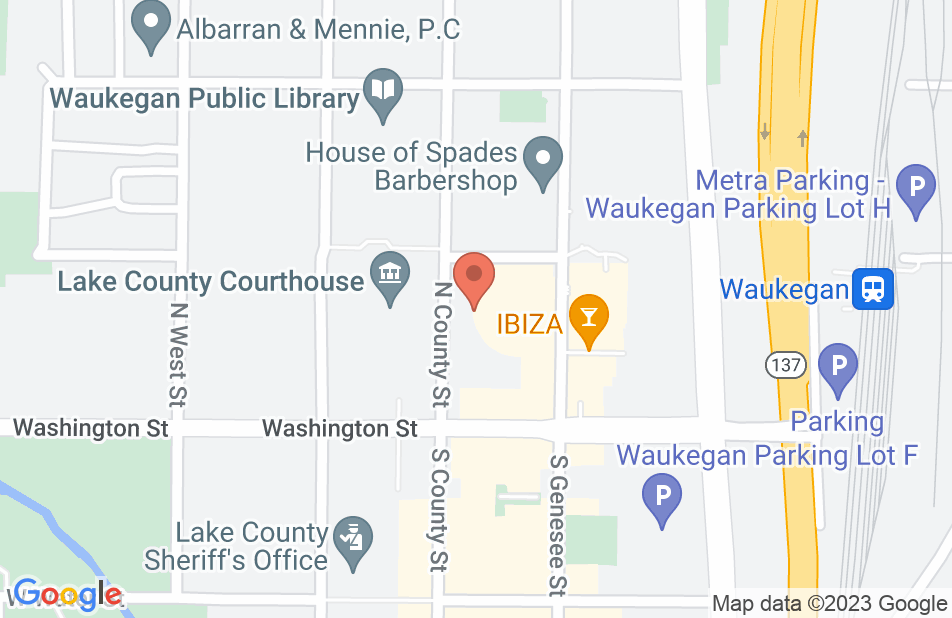 Expert Lawyer with immense understanding of all facets of law

I was in a complex matter involving both civilian and military court proceedings. Mr. Perillo charted me through challenging circumstances, foreshadowed multiple outcomes, and continuously stayed ahead of the prosecution. He was candid and realistic about all possible outcomes. Because of his ability, I was able to get the most beneficial and favorable outcome in light of my situation. You will not find a more knowledgeable lawyer than Mr. Perillo. He has my highest recommendation for legal defense.
This review is from a person who hired this attorney.
Hired attorney

Mike Perillo and his colleague Jason Dreifuss helped my son win a case that made national news. I can't thank them enough for what they have done for my child and myself. I highly reccomend them both for criminal defense.
This review is from a person who hired this attorney.
Hired attorney

Mike was responsive in a time of need. Kept in contact and addressed all issues. Professional and prepared. Would absolutely hire again.
This review is from a person who hired this attorney.
Hired attorney

The most professional Lawyer I cannot begin enough to express the professionalism the outstanding intellectual ability and the swiftness the knowledge and the fairness of this attorney I used him and a case the resolution was perfect a lot of it had to do with his due diligence I cannot recommend or stress enough if deciding between two different mike will not disappoint
This review is from a person who hired this attorney.
Hired attorney

Curve Ball After Curve Ball & Mr. Perillo Hits It Out Of The Park.

When I was named in a convoluted law suit filled with subterfuge, Mr. Perillo dug in and managed to keep the process focused and on track for the courts. A lawyer with less experience may very well have been caught up in the agenda of the lawsuit and tactics of the opposing attorney which would have made the court/judge's job of reaching a fair and unbiased ruling much more challenging. Mr. Perillo's knowledge of the law, understanding of filing procedures, experience in the court house and ability to communicate with all parties involved in the case in a proactive and timely fashion brought resolution to the case. I could not have been more please with Mr. Perillo's representation and would highly recommend him to anyone in need of an honest, diligent, result oriented attorney.

A very professional and caring attorney.

Mike handled a contract dispute for my husband and I. We were extremely satisfied with the outcome. He was very professional in his handling of the case. Additionally, he was very patient and explained legal details and kept us informed of new happenings. I would highly recommend Mike Perillo.

Mike Perillo's professional guidance and the extra steps he took to ensure I understood each process of the legal issues making me completely confident for a positive outcome. I felt completely at ease with the whole situation knowing I had his professional background fighting for my legal situation. He explained every question I had, returned my phone calls immediately was just always available for me. Hopefully I will not need the assistance of an attorney in the future, but if I should I will hire Mike again, Once again I would like to thank you Mr. Perillo for everything you have done for me. Your not just an attorney but a true caring friend.

I was inpatient in a hospital and had some issues relating to the care I received. Upon getting in touch with Atty. Perillo, he was very understanding and listened and felt confident about things. There was a lot of paperwork and such that needed to be sifted through by his nurse reviewer to determine the case. He kept me informed for the most part. There was a couple of times he could not get back to me right away and let me know what was going on, but as soon as he could he did. He is extremely knowledgeable about this type of law and I received my settlement when he said I would with everything correct and well explained. He is very thorough. I would recommend him if you have a negligence issue, or something related to it. He is very prompt at following up on the case.

Mr. Perillo handled a nursing home negligence case for a relative of mine which produced a very satisfactory outcome for our family. He is a fine outstanding attorney and I would highly recommed him.

Mike is a Client centered attorney, knowledgable in the law but practical as to unneeded and expensive courses of action not in his clients best interest. He takes the time to understand your objectives, concerns and desired outcomes. He is also a good listener, compassionate and you know that your best interest will be served, but not at unnecessary emotional or financial pain.
See all reviews

I strongly endorse this lawyer. I worked with Mike as an Assistant Public Defender. I had cases against Mike when he was in the Lake County State's Attorney's Office. We have been on opposite sides in the civil arena as well. No one works harder or is more prepared than Mike. He has a thorough knowledge of criminal and civil law. I consider Michael to be a valuable resource and often use him as sounding board to discuss cases and legal issues.

Mike and I first worked together over 25 years ago in the same felony criminal courtroom in Lake County, Illinois. We are both now in private practice, handling a much wider array of cases. I know that Mike has successfully handled nursing home neglect cases. I would recommend him highly. He is a very conscientious and ethical attorney.

Mike works tirelessly for all of his clients and does not cave to arguments of opposing counsel. He leaves no stone unturned and never avoids an opportunity to fight for his client's positions. Mike's attention to detail is invaluable and second to none. Any client would be hard-pressed to find an attorney more knowledgable, more passionate or more effective. I strongly endorse this lawyer.

I endorse this lawyer. I've known Michael many years, personally and professionally. He has great attention to detail, is a practiced and seasoned litigator, and fights for his clients' best interests.

I endorse this lawyer. From the time he spends helping people on Avvo by answering their questions, it shows how much he cares about people.

I endorse this lawyer. Attorney Perillo is an outstanding attorney with an exceptional reputation. He is a strong and zealous advocate for his clients and a credit to the legal profession. I highly recommend his legal services.

I endorse this lawyer. michael is a fine lawyer. his ethics are beyond reproach. he does good work.

I have known and recommended Michael J. Perillo for over 20 years, as both opposing counsel and a colleague, and as a friend. His personal and professional reputations are of the highest caliber. When one of my elderly aunts was injured, I referred her to Michael, as I knew he would be sensitive to her issues and would take care of her legal matter in a prompt and professional manner. I would recommend Michael, and the lawyers in his firm, for any legal issue or problem.

Mike's a great guy and a great lawyer.

Mike and I first worked together over 25 years ago in the same felony criminal courtroom in Lake County, Illinois. We are both now in private practice, handling a much wider array of cases. I know that Mike has successfully handled nursing home neglect cases. I would recommend him highly. He is a very conscientious and ethical attorney.

I strongly endorse this lawyer. I worked with Mike as an Assistant Public Defender. I had cases against Mike when he was in the Lake County State's Attorney's Office. We have been on opposite sides in the civil arena as well. No one works harder or is more prepared than Mike. He has a thorough knowledge of criminal and civil law. I consider Michael to be a valuable resource and often use him as sounding board to discuss cases and legal issues.

Mike is a friend who I know to be honest, genuine, down-to-earth and funny. As a colleague, I know Mike to be smart, resourseful and hard-working. He's a good person to have go to bat for you.

I endorse this lawyer. Mike is one of the hardest working people I have ever known. He will work diligently on your case. He really cares about what he does. A true professional in every sense of the word.

I highly endorse this lawyer. Mike has helped several of my clients. He has a great attitude towards his work. He is very experienced. And he gets very good results for his clients. I highly recommend Mike to persons who have a loved one that has suffered abuse or neglect in a nursing home.

I endorse this lawyer. Mike Perillo is ethical, smart, and hard-working. He is an excellent trial lawyer, well versed in criminal law and procedure and evidence. I would highly recommend Mike Perillo.